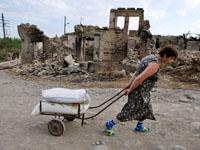 It has been three years since the five-day war in the Caucasus when Georgia attacked South Ossetia and showered its capital Tskhinvali with shells.

Prior to the the sad anniversary, President Dmitry Medvedev gave a lengthy interview to Echo of Moscow radio station, as well as to Russia Today TV channel and the First News Channel of the Caucasus. In the interview, Medvedev shared his memories of the time of the war.

"When the Defense Minister called me on August 7-8 at night, I was on holiday at that time. I was traveling on board a boat on the Volga River, and the whole planet was anticipating the Olympics in Beijing. The minister told me that our Georgian neighbor started a combat action. The first thing I thought was - is he [Saakashvili, the President of Georgia] completely crazy? Has he gone nuts? Maybe it was just a provocation and he was trying to test the Ossetians to prove something to Russia?"

Medvedev's doubts are easy to understand. Saakashvili was beaming with peacefulness on TV screens only four hours before Georgia attacked South Ossetia. He particularly appeared on a Georgian TV channel with a special message. "I want to announce with full responsibility that I have ordered all Georgian military units not to open the fire. I suggest we should conduct negotiations immediately. I am offering a hand of friendship and partnership to all. I would like to stress out the highly important role of the Russian Federation in solving and regulating these conflicts. Let's give peace a chance!" the Georgian president said.

What happened next is history. Russia's Defense Minister reported to the Commander-in-Chief that the Georgians preferred to use the language of artillery guns in the talks and that a tent with Russian military men had been already destroyed.

"So I said: open the fire in return. That was the hardest night in my whole life. It hurts to think what happened back then. It still hurts," Medvedev said.

However, the president said that he made the right decision and achieved his goals.

"I think that the goal of the peace-compelling operation, which lasted for five days, was accomplished. The siege of Tbilisi or any other city was not one of the goals that we had. One had to stop the aggression, which Saakashvili started. The task was to destroy the military machine of Georgia to stop the attacks against the civilians of Abkhazia, Ossetia and Russia," Medvedev said.

Georgian officials share a different point of view on the matter. Saakashvili took efforts, both morally and financially, to turn his defeat into victory. "The 58th Russian army was virtually burnt by the 4th Georgian brigade. Our troops for the first time since WWII made Russian generals flee from the battlefield," Saakashvili said. He probably forgot that the Russians and the Georgians were not fighting against each other during WWII.

It's not hard to understand Saakashvili. He had to make his "defense spending" justifiable. The Georgian president increased the defense budget of his country 33 times during his presidency.

Georgia had to spend nearly $1 billion, which corresponds to nine percent of the nation's GDP. Four percent is already a critical level for any economy. The amount of one billion dollars also corresponded to 25 percent of all income which the republican treasury received in 2008.

Saakashvili had to make his defeat a victory for strategic reasons too. According to him, Russia was simply unable to destroy NATO's ally so quickly. If the president of Georgia had acknowledged the opposite, he would have cast doubts on his political course. As a result, Saakashvili said that the Russian troops were planning to take both Georgia and the entire Black Sea and Caspian regions under control.

An adequate response to the "brave" Georgian leader can be found, for example, on the WikiLeaks website. The website published the cables of US Ambassador to Georgia John Tefft, who said that the war in August 2008 considerably undermined the armed forces of Georgia. According to Tefft, Georgia was unable either to control its airspace or repulse the aggression from any of its neighbors. The document also said that Georgia lost at least 80 percent of its air defense hardware during the five-day war. The country also lost 30 percent of its armored vehicles and 40 percent of US-made assault rifles. All of those losses were not recovered, the US diplomat said.

Therefore, Russia's military operation was successful despite all forms of speculation. However, the Georgian leadership continues to say that the country is not going to attack anyone. We heard the same from the President of Georgia three years ago, just four hours before the country launched an attack on South Ossetia.

Dmitry Medvedev does not think, though, that another war with Georgia is possible.

"I do hope that there will never be any conflicts between our countries ever again, even during Saakashvily's stay in power. It's much more important for us to turn this sad page over, remember the things that happened, and look forward. We need to restore the ties between the Russian and the Georgian people, and I would like this to happen as soon as possible.

Alas, the ties are not likely to be recovered as long as Mr. Saakashvili remains in power in Georgia. Tbilisi does not want to listen to Russia and prefers to sing its own songs instead. Manana Manjagaladze reacted to Medvedev's interview with statements about "occupation" and even "ethnic cleansing." She also drew a comparison between the tone of the Russian president and the "cold war lexicon."