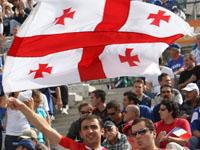 The Georgian Parliament unanimously approved the "Freedom Charter". According to the document, the Soviet symbolic is equivalent to the Nazi symbols, and is prohibited. In addition, the document talks about strengthening the anti-terrorist measures to confront Russia.

The document consists of two parts, the "Lustration Act" and "Patriot Act". The first part talks about the symbolism and removal of former KGB agents from the government, while the second part deals with "terrorism". The author of the bill is the chairman of the opposition faction "Strong Georgia" Gia Tortladze. However, the members of the parliament representing the majority loyal to President Mikhail Saakashvili were happy to vote in favor of the document. No opponents of the new law were present.

For the document to enter into force, a signature of the President is required. However, it is hardly likely that Saakashvili, who is actively fighting the "totalitarian past," would impede this process. It is expected that some provisions of the document will take effect immediately upon its signing by the President, and some will become effective starting January 1, 2012.

The most prominent part of the "Lustration Act" is the ban on the communist symbols and equating them to the Nazi symbols. There should be no monuments, streets and bas-reliefs reminiscent of the Soviet era in the cities and villages. Exactly the same law operates in the Baltic States, Poland and Hungary. It essentially means that the WWII veterans who wish to wear their medals on May 9 may be prosecuted by law.

Another provision of the document is virtually a copy of the similar laws enacted in the Baltic countries and Central Europe. It has to do with the ban on the employment of former KGB officers and functionaries of the Communist Party and Komsomol for a number of state and other positions. Such people cannot serve as judges, head of university departments or be a part of management teams of TV channels.

Those former officers who are already employed by government services will have to resign within a month after the law enters into force. Otherwise, the information about them will be made public. In addition, such persons may be nominated for election at various levels only after their "dark past" becomes public knowledge.

A special commission will be created to determine the persons subject to the law. It is assumed that within six months the commission would have the materials on secret KGB agents at its disposal. The same authority will make decisions on the dismantling of monuments "advocating Communist and fascist ideology," as well as rename the streets whose names are somehow identified with the Soviet past.

It would be interesting to know what will be done with the streets named after Georgians who died in the Great Patriotic War. In December of 2009, by the decision of Saakashvili, the Monument of Glory was blown up in Kutaisi, established in memory of the 300 thousand Georgians who gave their lives in 1941-1945. This looks like the Baltic matrix in action if we think of dismantling of the Bronze Soldier in Tallinn.

The second part of the document, the "Patriot Act," is named after a similar document of the United States adopted by the administration of George W. Bush after the attacks of September 11, 2001. It is expected that a roster of strategic sites that need to be vigorously protected will be created. Among them are government buildings, airports and other transportation hubs. The goods imported to Georgia will be carefully monitored.

Officially the document is referred to as a package of antiterrorism measures. The fact that it is directed against Russia was admitted back in 2009 by its author Gia Tortladze. According to him, blocking the document can only be associated with the activity of Russian intelligence services accused by the Georgian government of the involvement in all blasts that sound in the country from time to time. If the U.S. has introduced all these rules against the al-Qaeda, the Georgian authorities have actually equated the al-Qaeda to Russia.

The decision of the Georgian Parliament is very reminiscent of a "Soviet witch-hunt" and is literally copied from the similar acts in other countries, said Valery Khomyakov, the CEO of the National Strategy Council and a former member of the board of ATP, and Pavel Danilin, a historian and the chief editor of Kreml.org portal, in an interview with Pravda.ru

"Saakashvili is paranoid," said Valery Khomyakov. "Yet, we should not be indiscriminately berating everything he did. The lustration act was adopted not only in Georgia, but also in the Baltic countries and Poland. The same happened in Germany. These countries have gone the path of purification from the totalitarian communist (and in the case of Germany - Nazi) past. Russia also had this opportunity, but has not used it. In terms of an assessment of the crimes of communism, the decision of the Parliament of Georgia can be welcomed.

However, the adoption of the document brings to memory the explosion of the monument in Kutaisi. This is pure blasphemy. One should not confuse the crimes of communism, lustration, with the Soviet past which also had some heroic pages. Hundreds of thousands of Georgians were killed in WWII, Georgia's Militon Kantaria has mounted the Victory Banner over the Reichstag.

If Saakashvili thinks that this decision hurt Russia, he is only partially right. It hurt the veterans to a far greater extent. In this regard he made a completely wrong conclusion. Remembering the tragic pages of the totalitarian history, one cannot cancel out the entire history. And, even more so, one cannot insult the veterans. "

"The decision of the Parliament controlled by Saakashvili is a natural consequence of the recent developments in the country," said Pavel Danilin. "The opposition attempted to overthrow the President, the latter used repression. The dispersion of the opposition rallies and the adoption of the "Freedom Charter "are logical for the pro-American regime, similar to the junta of 1960-80s in Latin America. The anti-Soviet matrix looks like a copy of the conduct of the Latin American dictators who followed Washington and violently cracked down on opposition. There is not only "the Baltic matrix" here, though it certainly also holds.

Saakashvili has deliberately chosen this path. He has the same master as the juntas, on the other end of the world - the CIA - and he is loyal to his master. The President of Georgia has created a magnificent repressive machine. The police are paid high salaries, and they are loyal to the head of state. The fact that the vast majority of the population lives in poverty does not cause him much concern. This looks exactly like the situation with the U.S. puppets in Latin America.

The enacted law clearly offends hundreds of thousands of those who have died on the fronts of Georgia and millions of those still living. Yet, Saakashvili is not concerned about it. He is a CIA agent, his wife is a CIA agent, and he was placed on his throne by the U.S. Department of State. To please the master, Georgia has adopted such a law. However, do not forget that the President enacting such laws was elected by the majority of the Georgian people. "