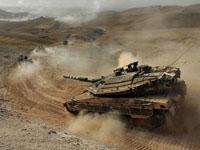 The war in South Ossetia that broke out in August of 2008 almost immediately revealed a number of political and military-technical aspects related to the western countries supporting Georgia. Israel also supplies military equipment to the regime of Mikhail Saakashvili.

However, the Israeli leadership has not sought to support Georgia's aggression against neighboring countries, and soon after the outbreak of hostilities, it was decided to suspend all military assistance. However, two years after completion of the Georgian-Ossetian war, the media again has information on the possible resumption of arms supplies from Israel to Georgia.

The Israeli-Georgian cooperation in the military sphere started in January of 2006, when Saakashvili visited Israel on a private visit. The President of Georgia made no secret of his interest in Israeli weapons. Shortly Israeli UAV rifles "Tavor" were shipped to Georgia.

When, in April of 2008, the Russian air force shot down an Israeli drone in the sky over Abkhazia, Jerusalem got worried. After this incident, the Israeli Foreign Ministry at the request of Russia took a policy decision to suspend the supply of offensive weapons to Georgia. The war erupted in August of 2008, inevitably re-aggravated the subject of the arms exports.

"Until now, Israeli officials have been extremely reluctant to comment on the situation with the rumors about the termination of supplies. Today, in Israel, no one can say with certainty whether the information disseminated by the Israeli newspaper Ma'ariv and the Associated Press news agency is a fact or a political hoax. Sami Ma'ariv and the Associated Press referred to "unnamed sources" in the Foreign Ministry and the Ministry of Defense of Israel," Russian service BBC reported on August 6, 2008, when Georgia was shelling a South Ossetian village.

The report also noted that the Israeli organization Shibata, carrying out military supplies, was not a part of the Ministry of Defense and operated autonomously (considering the advice of the Ministry of Foreign Affairs and Intelligence). In addition, "Tavor" and the unmanned aircrafts supplied to Georgia do not fall under the category of offensive weapons. On the background of further escalation of violence in South Ossetia and Abkhazia, it was decided to suspend military aid to Georgia.

After the war and the announcement of the independence of Abkhazia and South Ossetia, the media has repeatedly reported rumors about the resumption of supplies of Israeli arms to Georgia. In March of 2009, President of South Ossetia Eduard Kokoity made a statement accusing Israel.

In the fall of 2009, the Chief of General Staff of the Main Intelligence Directorate of the Russian Federation Alexander Shlyahturov said: "According to our data, Georgia continues to receive military assistance from NATO countries, Israel and Ukraine like it did before the events of August 2008 ... The United States is training personnel of the Georgian army, NATO and Israel supply Georgia with drones, while Ukraine supplies it with heavy weapons, including tanks and missile defense. "

Later, Israeli Prime Minister Benjamin Netanyahu issued a denial of the rumors about the resumption of military supplies to Georgia, distributed by media. "In regard with the supply of arms, we always take into account the concerns of all the parties, and expect that Russia would do the same thing - act in the interest of stability in volatile regions," said Netanyahu in February of 2010.

However, the information on Israeli weapons exports to this day remains highly controversial. In November of 2010, news agency Cursor, referring to the portal "economic security", announced the decision of Israel's Ministry of Defense to supply to Georgia tank Merkava-4. The official confirmation of this "leak" has not been received.

Russia and Israel have repeatedly had scandals because of the supply of Russian weaponry to Arab countries. Thus, directly or indirectly, flirting with Saakashvili's regime can be linked with Israel's dissatisfaction with the unfriendly policy of Moscow (from their point of view) to extend full assistance to Iran and Syria, a real threat to Israel's existence.

However, regardless of the motives of the Israeli politicians, in practice, the support of Georgia before the war was limited, and cooperation was minimized rather quickly. Before the war, President Saakashvili was not able to get Merkava-4 tank adapted for use in mountainous terrain.

Ultimately, Israel is not interested in fighting with Russia that has agreed to make some concessions on the issue of arms sales to Syria and Iran. Moreover, most Israeli politicians do not have much love for Saakashvili who is regarded as a dictator actively using the military-police methods to solve problems within the country.

Without ruling out the resumption of supplies to Georgia, the Israelis are likely to act with great caution.