Mr. Saakashvili, it is time to say goodbye

The Fat Lady has sung, the BBC, mouth piece of the British Neocons, has declared that, yes, Georgia and Saakashvili in particular are guilty of the murder of civilians in South Ossetia. Of course, they quickly then backed it up by saying Russia was wrong in defending those civilians being butchered by the Georgians. After all, we would not want Russia and the Russian people to feel they were right, even when they were, now would we? 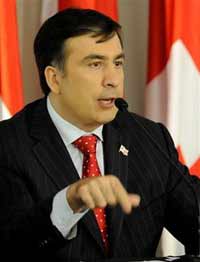 Mr. Saakashvili, it is time to say goodbye

Anyways, moving right along, dear reader, we return to our useful fool, Saakashvili. Well, when one of the key propaganda organs of the Anglo-American Trotskyte Neocons declares you in the wrong and you are a petty dictator of a small nation and one, to boot, presently and from day one on the Neocon payroll, that can only mean one thing...you are done, yesterday's news, kaput.

To boot, the opposition now plans marches on the 7th of November, the day that Saakashvili sent his Anglo-American trained goons in to beat the opposition to the ground in 2007. Back then, the Anglo-American Trotskytes still cared about their puppet, so they made a few noises about his assault upon unarmed peaceful demonstrators and than quickly blamed the demonstrations on Russia, surely not on the corruption and autocracy of their favorite puppet. This year promises to be different.

Now that the puppet has been used to try to restart the Cold War and failed. Now that most of the sensible folks of Europe have told the Anglo-American Trotskytes to go pound sand and the evidence is mounting daily that Georgia is a rouge state in every definition of the word and the people will be rising up against the Soros paid, CIA/MI6 controlled puppet, the Anglo-Americans are moving to keep ahead of the situation. It is obvious that Saakashvili is useless, worse than useless now, so a new replacement must be picked, one picked by the Neocons before the Georgians manage to pick one themselves. Oh sure, just like the last 3 times, the pick will look like it came from the people but they are an easy bunch to fool.

But what about Saakashvili? Surely a man in his situation might turn to Russia for help, except for that whole little August war thing and Russia having declared him a war criminal. Can't go there. To Europe? No, to much of a liability. Azerbaijan and Turkey have both declared their worries about his fitness to rule so they are probably out. Surely not the Armenians, not after what he's done against his own Armenians. Ukraine might be an option, at least as long as Yushchenko, the withered Orange is still hanging on the branch, but that too might not be for long.

Gosh, few choices. Its times like these one checks his life insurance policy to make sure it is paid up, the West does not like loose ends.