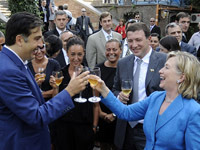 USA urges Russia to de-occupy Georgia. This was stated in a resolution adopted by the U.S. Congress, which stresses that Abkhazia and South Ossetia, in line with the resolution, are recognized as the regions of Georgia occupied by the Russian Federation. The resolution urges the Russian government to take steps to meet the conditions of the armistice agreement of 2008 between Georgia and Russia, including the return of the troops to pre-war positions and ensuring access for humanitarian assistance to all who have been affected by the conflict.

Of course, the reaction to the external interference was rather intense in the countries affected by it. The independent Georgian political scientist George Kadzhaya told "Pravda.ru" that "This resolution is a stark warning to Russia, and it shows once again that the civilized world did not recognize the legitimacy of its aggression against Georgia. And if so, there will be no recognition of the operetta republics formed in the occupied Georgian lands and held on the Russian leash. Georgia is backed by the U.S., which sooner or later will help restore justice. Moscow drove itself into a position where it is now by its aggressive actions in 2008. Our retreat from Tskhinvali was a tactical defeat. The main event is yet to come. "

Of course, a different reaction is observed in Russia, Abkhazia and South Ossetia. In an interview with "Pravda.ru" Ambassador of the Republic of South Ossetia in Russia Dmitry Medoyev said:

"We regret that the distinguished American congressmen have followed the Georgian ideologists of revenge, the same Tbilisi regime that three years ago launched a war against South Ossetia.
Apparently, the emergence of such a resolution is caused by the fact that the Americans are misinformed of the current events. After all, the myth of the Russian occupation of Georgia has nothing to do with reality. No one occupied South Ossetia.  Its people expressed great appreciation of Russia and its leaders for the early and courageous decision made in August of 2008. This was the only thing that made the salvation of the South Ossetian people from genocide by Georgia possible.

It is especially sad that this resolution was adopted on the eve of the third anniversary of the beginning of the Georgian aggression and barbaric bombing of the sleeping city of Tskhinvali, which caused a mass death of children, women and old men. "

The response of the Abkhaz side was similar. In turn, Russia's permanent representative to NATO Dmitry Rogozin regarded the resolution as "the usual spitting in the direction of Russia" and suggested not responding to it. According to him, "Russia cannot invade the state that it recognizes and that invited it to host the Russian troops on its territory.

This is a necessary measure, since other states, such as the United States or international organizations like EU and NATO, refused to guarantee Abkhazia and South Ossetia safety and non-aggression by Georgia. Under these circumstances, the Russian military presence is the only factor that contributes to the stability in the region. If the U.S. senators lack legal training, we are ready to provide them with advanced training in one of law schools of the Russian Federation. In politics, you can appear in different ways: you can instill fear, you can bring amazement, but you cannot look ridiculous. "

Can this document be treated so lightly? The position of many experts from Moscow, Sukhumi and Tskhinvali is reduced to the fact that Americans "do not know," "do not understand", or "have no information". This interpretation does not hold water.
The U.S. is providing deliberate support of Georgia's revenge aspirations. Similar pro-Georgian resolutions from the then Secretary of State Condoleezza Rice and other prominent U.S. politicians were perceived by the Georgian political elite as a call to action "to restore Georgia's territorial integrity."

The Congress acts in the same spirit today. Since the end of the August war, the U.S. officials have repeatedly expressed support of "Georgia's territorial integrity," and the resolution of the Congress created an illusion for Saakashvili that the situation has changed in his favor. Now he perceives his position as more advantageous compared to that of August of 2008. It is sufficient to consider even the fact that a training base of mountain shooters of NATO in Sachkhere was officially opened nearly on the border with South Ossetia in July.

As evident from the experience of 2008, such flirting with Georgian politicians, hungry for revenge, could provoke an escalation of the conflict. The U.S. government is well aware of it and knowingly supports the hotbed of tension at the Russian southern border. All this proves once again that the "reset" declared by Obama actually does not mean anything, because the resolution adopted by the Congress bears a direct threat to Russia. One can only guess exactly when another exacerbation of the conflict will happen at the Russian southern border on the order of Washington.