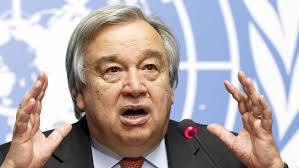 The United Nations gains more than a breath of fresh air with the appointment of the Portuguese ex-Prime Minister and ex-UNHCR Director, António Guterres, as the next Secretary-General. The UN gets a free thinker, a man of integrity and courage, someone who is more than an apparatchik, someone who can make a difference, a people person.

António Guterres fought his winning election campaign to lead his Socialist Party to victory after ten years of governance by the PSD, or Social Democrats, under the then PM Aníbal Silva, had led the country to breaking point, with the expression "The Portuguese are not a business. They are people". That expression sums up António Guterres.

António Guterres, born in 1949 in Lisbon, was a brilliant student - in fact he was awarded the country's best student award in 1965, before entering the prestigious Technical University (IST) where he graduated with a 19 out of 20 in physics and electrical engineering. He started his life as a professor, but after the Revolution in 1974, joined the Socialist Party and dedicated himself to politics.

Coming from the Catholic Socialist area, he rose through the ranks and became General Secretary of the Portuguese Socialist Party from 1992 to 2002, and Prime Minister of Portugal (twice) from 1995 to 2002. Simultaneously he was President of International Socialist from 1999 to 2005, then United Nations High Commissioner for Refugees from 2005 to 2015.

His discourse has always been to gain the trust of the people through understanding the people and working for them, leading by example and practising inclusive politics, working towards understanding, working against marginalization.

But there are two other stories coming out of Portugal which also place António Guterres, the person, in a nutshell. One is the fact that his own neighbor in his block of apartments in Lisbon had no idea that he was the ex-Prime Minister, or even that he worked at the UNHCR - she thought he was just another transparent, anonymous regular guy...and the other came from a mutual friend.

The day after António Guterres resigned as Prime Minister (after an arguably weak showing in the municipal elections - Guterres understood that petty domestic politics was not where he wanted to stay), this friend asked me if I knew where Guterres was. I said no. Then he asked "And do you know what he is doing right now?" I said "No, I suppose he is relaxing and enjoying real life after politics?" "No, I will tell you where he is and what he is doing. Right now, he is sitting with children from poor social backgrounds, helping them with their math homework in a voluntary coaching center, working as a volunteer, helping poor kids with their studies".

This is the António Guterres I introduce you to, a people person. And more than this. At the time he did not tell anyone, nor did he wish anyone to know, what he was doing. A remarkable man, a remarkable person, as the world is about to find out for itself.