"The threat is serious, the time short. The Bulletin of the Atomic Scientists does not move the hands of the Doomsday Clock for light or transient reasons. The clock ticks now at just three minutes to midnight because international leaders are failing to perform their most important duty-ensuring and preserving the health and vitality of human civilization." (Bulletin of the Atomic Scientists, January 2015.) 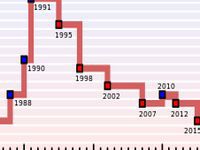 When Barack Hussein Obama was presented with the Nobel Peace Prize on 10th December 2009, just eight months in to his Presidency, the motivation was: " for his extraordinary efforts to strengthen international diplomacy and co-operation between peoples."

The Nobel Committee: " ... attached special importance to Obama's vision of and work for a world without nuclear weapons ... as President he (had) created a new climate in international politics."

"Only very rarely has a person to the same extent as Obama captured the world's attention and given its people hope for a better future."

In his presentation speech, Nobel Committee Chairman, Thorbjørn Jagland said that Obama had, from the first moments of his Presidency strived  against confrontation and had already: "lowered the temperature in the world."

In his acceptance speech the President Obama stated that: "Our actions matter, and can bend history in the direction of justice."

He was also committed to: "upholding the (Strategic Arms Reduction Treaty.) It is a centerpiece of my foreign policy.  And I'm working with President Medvedev to reduce America and Russia's nuclear stockpiles."

In conclusion, to applause, he appealed: "Let us reach for the world that ought to be - that spark of the divine that still stirs within each of our souls."

Since then the myriad mass graves of America's victims have become silent witness to the hypocrisy and insincerity of his address at Oslo City Hall on the 113th Anniversary of Alfred Nobel's death in acceptance of an Award which Nobel's will had specified should be presented: " ... to the person who shall have done the most or the best work for fraternity between nations, for the abolition or reduction of standing armies and for the holding and promotion of peace congresses."

Gulag Guantanamo remains open, much now militia-run Libya is in ruins, American troops are back in Iraq, where over 2,000 bombing raids have been carried out by American 'planes. Obama's Administration still endorses the illegal overthrow of President Assad of Syria, training the mass murdering, beheading, organ eating "moderate" opposition, and the much vaunted departure from Afghanistan, is not a full departure at all.

Ukraine bleeds daily from the US boasted five Billion dollar coup, Russia is blamed, sanctioned and resultantly feels threatened enough to rearm. The Cold War had been not only rekindled, the flames are visibly rising.

In March 2013 Stratfor noted: '"With the full support of a feckless policy, elite and an uncritical media establishment, Washington is slipping, if not plunging, into a new Cold War with Moscow." Strong words from Professor Stephen Cohen in a January article published in The Nation, who is a lonely voice in the US academic establishment with an unpopular point of view. He has been warning for several years now that rapidly deteriorating relations between the US and Russia will lead to a new period of sustained political and military tension between the two powers. '(1.)

Now, the annual setting of the Bulletin of the Atomic Scientists Doomsday Clock (22nd January) has been re-set  - forward two minutes to three minutes to midnight, the first time since the end of the Cold War and thirty years on from the last such setting in 1984 under the presidency of Grenada invader, another Libya bomber, and Iran-Contra dealing (2) Ronald Reagan.

In 1984, the Bulletin recorded: " ... relations between the United States and the Soviet Union reached an icy nadir. Every channel of communications has been constricted or shut down; every form of contact has been attenuated or cut off. And arms control negotiations have been reduced to a species of propaganda." Sound familiar?

Yesterday they noted: "Today, more than twenty five years after the end of the Cold War, the members of the Bulletin of the Atomic Scientists Science and Security Board have looked closely at the world situation and found it highly threatening to humanity - so threatening that the hands of the Doomsday Clock must once again be set at three minutes to midnight, two minutes closer to catastrophe than in 2014."

Further: " ... efforts to reduce world nuclear arsenals have stalled. The disarmament process has ground to a halt, with the United States and Russia embarking on massive programs to modernize their nuclear triads - thereby undermining existing nuclear weapons treaties - and other nuclear weapons holders joining in this expensive and extremely dangerous modernization craze."

It is not alone the nuclear nightmare: "Insufficient action to slash worldwide emissions of greenhouse gases can produce global climatic catastrophe. Even a so-called "limited" nuclear weapons exchange will produce massive casualties and severe effects on the global environment. We implore the political leaders of the world to take coordinated, quick action to drastically reduce global emissions of heat-trapping gases, especially carbon dioxide, and shrink nuclear weapons arsenals."

The Bulletin's Science and Security Board whose Board of Sponsors include seventeen Nobel Laureates:

" ...  implore the citizens of the world to demand action from their leaders. The threat looms over all of humanity. Humanity needs to respond now, while there is still time."(3)

The Clock, established in 1947, has become universally recognized indicator of the world's vulnerability to catastrophe from nuclear weapons, climate change, and emerging technologies in the life sciences.

The Board stresses that catastrophe can be avoided with urgent action. Time wasting is not an option. Essential priorities are:

*Actions which would cap greenhouse gas emissions at levels which would halt the average global temperature from rising more than two degrees Celsius above pre-industrial levels.

* Re-energize the disarmament process - with commitment to results.

If President Obama read the documents and consulted with the towering collective knowledge available at the Bulletin, applied that commitment for which they plea, built bridges globally rather than blowing them up, there is enough time in the final twenty two months of his Presidency to embark on the road to justifying that Nobel. We can only fervently hope that as he stated in his acceptance speech his actions at last "can bend history in the direction of justice."