According to international human rights organization Reprieve the: " ... executions took place in twelve cities in Saudi Arabia, four prisons using firing squads and the others beheading. The bodies were then hanged from gibbets in the most severe form of punishment available in the Kingdom's law." 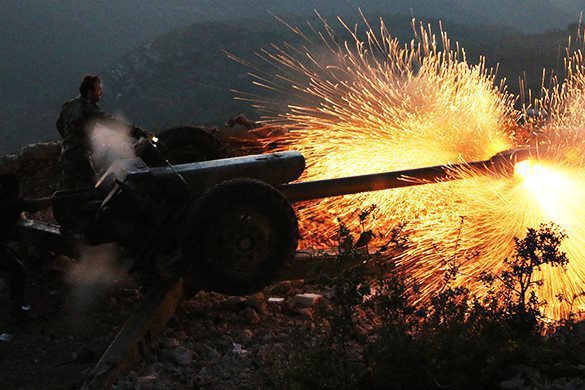 "Human rights is a cause that runs deep in the British heart and long in British history."

(Britain is) "Driven by a belief in fundamental human rights and a passion to advance them."

Last September, Saudi was elected Chair of the UN Human Rights Council with Britain's collusion due to its conducting: " ... secret vote-trading deals with Saudis to ensure both states were elected to the UN Human Rights Council (UNHRC), according to leaked diplomatic cables." This was: " after Riyadh (had) sanctioned more than a hundred beheadings so far this year - more, it is claimed, than Islamic State."

So much for the integrity of the UK and UN Institutions.

According to international human rights organization Reprieve the: " ... executions took place in twelve cities in Saudi Arabia, four prisons using firing squads and the others beheading. The bodies were then hanged from gibbets in the most severe form of punishment available in the Kingdom's law."

Amnesty International is specific: "The death penalty breaches two essential human rights: the right to life and the right to live free from torture. Both rights are protected under the Universal Declaration of Human Rights, adopted by the UN in 1948."

As this is written, Reprieve has updated executions in Saudi Arabia for 2015 to "at least" one hundred and fifty eight people. Another 2015 highlight of the justice system of the Chair of the Human Rights Council include a nineteen year old woman gang raped by seven men, subjected to two hundred lashes and jailed for six months. Yes, you read that correctly, the nineteen year old victim horrifically penalised, not the rapists. Moreover: "The victim's lawyer Abdul Rahman al-Lahem, who appealed to the Court ... was banned and his license was confiscated."

The response to this barbarism from Britain which has enjoined in the destruction of the Balkans, Afghanistan, Iraq, Libya, Syria in the last two decades - over one country every five years - in the name of freeing citizens from "regimes" who "kill their own people", was expressed by Foreign Office Minister Tobias Elwood as: "disappointment."

As Reprieve has pointed out: " of those facing execution in Saudi Arabia in 2015, the vast majority - 72 per cent - were convicted of non-lethal offenses ... while torture and forced 'confessions' were frequently reported."

Further: "Far from being 'terrorists', at least four of those killed were arrested after protests calling for reform - and were convicted in shockingly unfair trials. The Saudi government is clearly using the death penalty, alongside torture and secret courts, to punish political dissent.

"By refusing to condemn these executions and parroting the Saudis' propaganda, labeling those killed as 'terrorists', Mr. Hammond is coming dangerously close to condoning Saudi Arabia's approach."

He was not alone. UN Secretary General Ban Ki-moon was merely "dismayed", however on the day of the mass murders, when the Saudi Embassy in Tehran was attacked by protestors enraged at the killing of respected cleric Nimr Baqir al Nimri, Ban "deplored the violence."

Four days later when the Saudis were accused of an attempt to bomb the Iranian Embassy in Yemen and dropping (US made) cluster munitions in a populated area, Ban ignored the Embassy attack and was merely "troubled" and expressed "concern" about the latter, in spite of saying that: " ... use of cluster munitions in populated areas may amount to a  war crime due to their indiscriminate nature." Britain was blind, deaf and mute.

President Nobel Obama's spokesman referred to a "list of concerns" regarding Saudi's shooting and head chopping rampage, confirming gently that: " ... mass executions would rate highly in that list of concerns ..."

For most in the real world it would "rate highly" in horror, outrage, unequivocal condemnation with immediate imposition of draconian trade and travel sanctions and withdrawal of diplomatic missions as has been meted out to countries for considerably lesser outrages, indeed even imagined ones, think Iraq and "weapons of mass destruction." The White House was though, also very exercised by the "violent" attack on the Saudi Embassy in Tehran.

Well it would be. Forget concerns about tyrants who "kill their own people." Last November alone the US Administration: "approved a $1.29 billion arms sale to Saudi Arabia, despite widespread mounting evidence of the country's mass atrocities and possible war crimes in neighboring Yemen.

"The U.S. State Department ... approved the sale of over 10,000 bombs, munitions, and weapons parts produced by Boeing and Raytheon. This includes 5,200 Paveway II 'laser guided' and 12,000 'general purpose' bombs. 'Bunker Busters,' also included in the deal, are designed to destroy concrete structures."

Raed Jarrar, government relations manager for the American Friends Service Committee (AFSC) points out that it is: " illegal under U.S. and international law to transfer weapons to human rights abusers, or to forces that will likely use it to commit gross violations of human rights," moreover: "There is documented evidence that such abuses have been committed by almost all of U.S. allies in the region."

As for Britain, according to the Campaign Against the Arms Trade:

"David Cameron has overseen £5.6 Billion of military licences to Saudi" they state, demanding that due to the "mass executions and (illegal) bombing of Yemen the UK must sop arming Saudi Arabia", which say CAAT is by far the largest buyer of UK arms ... licences included fighter jets, tear gas, military vehicles and targeting equipment. 62% of UK adults oppose" the sales.

It should be to Britain's and other suppliers shame, as Andrew Smith of Campaign Against Arms Trade states: "The Saudi regime has a history of locking up bloggers, executing critics and cracking down on dissent. Despite this they can always rely on getting almost uncritical support from countries like the UK that prioritize arms company profits over human rights."

Smith emphasizes that: "UK bombs and fighter jets have been central to the destruction of Yemen. As long as Saudi enjoys the political and military support of the most powerful Western nations, then it will continue oppressing its own population and those of neighbouring states."

The British government may though at least finally be held to account, hopefully setting a precedent. As this was concluded the following statement arrived:

"As set out in the letter, a range of international organizations including the European Parliament and many humanitarian NGOs, have condemned the ongoing Saudi air strikes against Yemen as unlawful ...

"Leigh Day has asked the government to confirm if it now accepts there is credible evidence Saudi Arabia has violated (international human rights law) in its conduct in Yemen.

"The letter before action has asked the government to confirm within 14 days whether the Secretary of State for Business, Innovation & Skills, Sajid Javid will:

2.Agree not to grant further licences for the export of military equipment to Saudi Arabia pending the completion of such a review.

3.Agree not to grant further licences (and to suspend existing licences) until the government is in possession of sufficiently clear information to enable a proper assessment as to whether such licences can be granted lawfully. (Emphasis mine.)

"The UK government is under a clear legal obligation to ensure any military equipment and/or technology exported from this country to another, is not being used in breach of international humanitarian law.

"Given the widespread and credible evidence that the Saudi authorities are breaching their international obligations in Yemen, we can see no credible basis upon which the UK government can lawfully continue to export arms to them.

"We hope our client's letter will cause the government to reconsider its position and suspend all licences with immediate effect, pending a proper investigation into the issue."

"UK weapons have been central to a bombing campaign that has killed thousands of people, destroyed vital infrastructure and inflamed tensions in the region. The UK has been complicit in the destruction by continuing to support air strikes and provide arms, despite strong and increasing evidence that war crimes are being committed."

"These arms sales should never have been approved ... The Saudi regime has an appalling human rights record ... How many more people will be tortured and killed before the government finally says it will stop arming ... one of the most oppressive regimes in the world?"

Should there be any doubt of the abhorrence of actions of the Saudi regime and those that aid and abet them, read this statement from the Ministry of the Interior:

"The recompense of those who wage war against Allah and His Messenger and do mischief in the land is only that they shall be killed or crucified or their hands and their feet be cut off from opposite sides ... That is their disgrace in this world and a great torment is theirs in the Hereafter."

The executed and currently threatened with death in Saudi jails, were not of course waging war against Allah, some were simply availing of the human right to write, blog, protest in the country of a Western ally - a West, with the UN, which shames all in its selective attitude to humanity and human rights.