Only days after Prime Minister David Cameron's embarrassing Little Englander strut around the European Parliament attempting to dictate - sorry, "negotiate" - new terms for Britain's membership of the European Union, the EU Parliament has delivered a backhanded, but unmistakable blow to the UK and its partner in crime, Saudi Arabia. 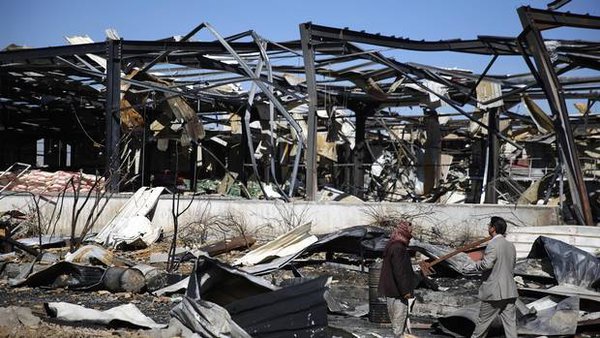 As Saudi decimates Yemen with British made bombs and missiles, dropped from British aircraft, advised by British military experts based in the Saudi Command and Control Centre, the European Parliament voted on Thursday, 25th February for an EU-wide arms embargo against Saudi in protest at its assault on its southern neighbor.

The Parliament cited the "disastrous humanitarian situation" as a result of the "Saudi-led military intervention in Yemen".

"The vote does not compel EU member states to act but it does increase pressure on Riyadh, in the wake of criticism from the UN and growing international alarm over civilian casualties in Yemen", comments The Guardian.

"An earlier draft of the resolution" which had named "and criticised the UK and other EU member states, including France, Spain and Germany, was dropped. The final version said 'some EU member states' had continued to authorise transfers of weapons to Saudi Arabia since the violence started, in violation of EU rules on arms control." The amendment was passed by 359 votes to 212, with 31 abstentions.

In fact: "under a 2008 code of conduct, EU member states promised not to sell weapons to countries where they might be used 'to commit serious violations of international humanitarian law' and undermine regional peace and stability."

Since the Saudi blitz began in March 2015, an estimated 7,000 people have been killed and 35,000 injured, with a UN panel in January, stating: "The coalition's targeting of civilians through airstrikes, either by bombing residential neighbourhoods or by treating the entire cities of Sa'dah and Maran as military targets, is a grave violation of the principles of distinction, proportionality and precaution. In certain cases the panel found such violations to have been conducted in a widespread and systematic manner", in violation of international humanitarian law.

As the Campaign Against the Arms Trade (CAAT) points out, in spite of the vote not being legally binding, it sends a strong message to member States that have continued to arm Saudi Arabia despite allegations of war crimes in Yemen.

The Campaign's Andrew Smith is unequivocal: "The European Parliament has sent a clear, strong and much needed message to governments like the UK, that have been complicit in the destruction of Yemen. The toxic combination of arms sales and political support has helped to fuel, facilitate and legitimise the humanitarian catastrophe that is taking place."

Moreover: "Government Ministers may talk about the importance of human rights, but UK bombs and fighter jets have been absolutely central to the bombardment. Thousands have died yet the message sent out by the UK government is that their lives are less important than arms company profits."

In January 2016, Law firm Leigh Day, representing CAAT, issued a pre-action protocol letter for judicial review challenging the government's decision to export arms to Saudi Arabia despite increasing evidence that Saudi forces are violating international humanitarian law in Yemen. CAAT is expected to make further announcements on the status of the legal action in the coming weeks.

Whilst Saudi Arabia is Britain's largest customer for weapons, a recent study by Opinium LLP for CAAT found that 62% of UK adults oppose arms sales to Saudi Arabia, with only 16% supporting them.

UK exports of armaments to Saudi increased by over 11,000 percent in just a three month period last year, with David Cameron, when queried in this trade in death ever repeating his delusional mantra that: "We have some of the most stringent arms control procedures of any country in the world."

Ironically, as Amnesty pints out: "the UK was a leading light in the creation of the Arms Control Treaty (2014), an important international law designed to eliminate arms sales that fuel human rights abuse. When the UK signed on the dotted line of the treaty in April 2014 Foreign Secretary William Hague stated it would 'make the world safer, by placing human rights and international humanitarian law at the heart of decisions about the arms trade.' "

Meanwhile, as the illegal bloodbath continues in Yemen, William Hague's successor, Philip Hammond, who, incredibly, appears even more intellectually challenged than his predecessor, states that he is relying on Saudi Arabia to investigate their own carnage, deaths and detonations of International Humanitarian Laws, Human Rights, the Rights of the Child, the Geneva Convention - but then, after the Balkans, Afghanistan, Iraq, Libya, Syria, and arms sales, Britain is hardly in any position to take any high moral ground.

Incidentally, when then Secretary of State James Baker promised to reduce Iraq to a "pre-industrial age" in 1991, the onslaught was called "Operation Desert Storm", the Saudis have named their equivalent in Yemen "Operation Decisive Storm." In Latin, Yemen, one of the oldest centres of civilization in the Near East, was called Arabia Felix: "Fortunate Arabia", or "Happy Arabia." Response to some ironies can only be to weep.