With the date of the publication of Chilcot Inquiry into the illegal invasion of Iraq just weeks away (6th July) reportedly set to "savage" former Labour Prime Minister Tony Blair he has made a rare return to the UK and gone in to manic diversionary tactic overdrive. 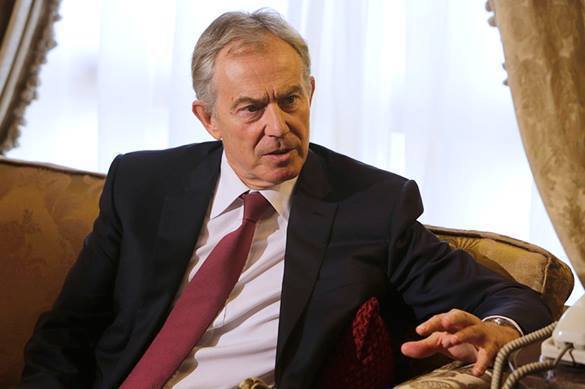 It seems no radio, television news or current affairs programme is without Blair giving his opinion on the upcoming UK referendum on whether to stay in the European Union, making near libelous comments on the current courteous, dignified, non-warmongering leader of the Labour Party, Jeremy Corbyn (who was implacably against Blair's foreign interventions.)  He has waded in to the economy, Africa, faith, God and of course is cheerleading for invading Syria and reinvading Iraq.

He had been Prime Minister for a mere twenty three months when he signaled his preference for bloody interventionism. Speaking at the Chicago Economic Club on 22nd April 1999, he said:

"Many of our problems have been caused by two dangerous and ruthless men - Saddam Hussein and Slobodan Milosevic ... Instead of enjoying its oil wealth Iraq has been reduced to poverty, with political life stultified ..." The Balkans of course was already being pulverized: "On its fiftieth birthday, NATO must prevail" he said. Perhaps he was facing his and the US' worst nightmare - that with the Berlin Wall gone, the Cold War ended and European and Russian citizens rejoicing, NATO no longer had a raison d'etre. Don't "give peace a chance."

Iraq was then left, unable to independently import the nation's needs, rebuild, repair. With towering inventiveness, imagination and determination the country rose from the ashes, but beneath the surface, the infrastructure was near terminal for want of imported parts. Blair ignored both impressive achievements, the embargo's silent infanticide, genocide and ecocide and the Billion $ rip-off which was the shameful so called UN "Oil for Food" deal.

However, Blair's Chicago speech demonstrates how long he had been determined to back the US in the illegal overthrow of the leader of a sovereign nation. His address was just eleven months after the US had passed The Iraq Liberation Act (10th May 1998) which determined it:  "...  should be the policy of the United States to seek to remove the Saddam Hussein regime from power in Iraq and to replace it with a democratic government."

They are not going well. Michael Burleigh in an eviscerating piece in the Daily Mail headed: "Why I despise conman Blair's grubby attempt to spin away Chilcot truths" writes: "Chilcot will be a defining moment in our recent history ... It will show how the art of lying has become central to the British way of government - with 'facts' proving malleable and the Civil Service degraded into partisanship."

Having dragged: "the perma-tanned multi-millionaire become pantomime villain" through the depths of media mud he concludes: "But the lessons to be learned from Iraq must include how a preachy conman debased our entire system of government."

Also in the Mail, Quentin Letts ("Enter Saint Tony, as tanned as the top of an egg flan...and looking every one of his 63 years ...") refers to an event at which Blair was speaking and from which Letts and other journalists were barred: " By the way, yesterday's event was co-organized by Mr Blair's 'Faith Foundation' which seeks to promote 'stable societies'.

"And if they won't make themselves stable we'll jolly well have to drop bombs and parachutists on them and invade them with tanks and battalions of Western troops and basically kill them. All. That'll calm them down, just you see."

Blair was also: " ... shrivelled by scandals and pointlessness ..."

However: "Mr Blair hinted that he may collaborate with Sir John Major and Gordon Brown on a joint pro-Brussels platform. There was a place for former Prime Ministers, he insisted.

Did he mean The Hague?"

Chris Nineham writing in The Guardian has reminded that: "The parody of Blair as US poodle diminishes his role in history. He chafed at Bill Clinton's hesitancy to bomb Serbia in 1999 and secretly reassured the Bush administration that it would not be alone in the illegal pursuit of regime change in Iraq" in April 2002.

"It should be an encouragement to progressives that Blair's combination of aggression overseas, pro-market policies at home and deception in general has made him a pariah."

Nineham's reference to the commitment to Bush re Iraq related to the memo by Colin Powell to George W. Bush briefing him ahead of Blair's visit to Bush at his Crawford, Texas ranch, 5-7th April 2002. A paragraph confirms (3) that: "On Iraq, Blair will be with us should military operations be necessary. He is convinced on two points: that the threat is real; and success against Saddam will yield more regional success ..."

The "threat" of course was a fantasy followed up by a pack of lies and the result has been a "regional" bloodbath.

It is set to get worse for Blair. On 6th June a drama, "Reg", is to be shown on BBC 2, the real life story of Reg Keys and his wife Sally whose soldier son, Lance Corporal Tom Keys (20) was killed in Iraq with five colleagues.

In 2005 Reg Keys, a paramedic and paramedic trainer, ran against Tony Blair in his Sedgefield, Co Durham constituency in the general election with the aim of drawing attention to Blair's Iraq duplicities. On election night with all the candidates gathered after the count, which of course Blair won, Keys gave a withering, blistering speech reducing the winner and his wife to standing white faced, clench lipped and frozen. As the candidates finally parted Blair refused to shake Keys' hand. Truth clearly hurts.

Reg's wife Sally never recovered from the loss of Tom and died in 2011, aged fifty seven. Their agony mirrors the losses of other families from a war built on untruths in the UK and unendingly, ongoing, in Iraq.

Anna Maxwell Martin who plays Sally Keys has commented: "I think this absolutely hammers home the personal nature for some people and I hope it really highlights Tony Blair to be the gruesome crook that he is."

Actor Tim Roth plays Reg Keys and said that he hopes the drama forces Blair to apologise and: " I've always felt Blair should be hauled off in handcuffs and put in Wormwood Scrubs (prison). I think he's profited from the death of Reg's son and the Iraq war. I have nothing but contempt for him."

In September former MP George Galloway is to screen a documentary. It is called "The Killings of Tony Blair."

Meanwhile The Iraq Families Action Group intend to use the findings of the Chilcot Inquiry to sue Tony Blair, his former Ministers and Generals,  on behalf of the 179 British soldiers killed. They intend to seek unlimited damages.

The former leader of the Scottish National Party, MP Alex Salmond seems set to revive a group of politicians formed with a view to taking legal action against Blair back in 2004.

Salmond has said that he said he believed the: "best route would be to use the International Criminal Court because the Prosecutor is able to initiate action on his or her own behalf on presentation of a body of evidence, which Chilcot would provide." However, he says he is open to any legal avenue which could have the desired outcome.

Meanwhile, Labour Leader Jeremy Corbyn, interviewed on BBC's Newsnight stated: "We went into a war that was catastrophic, that was illegal, that cost us a lot of money, that lost a lot of lives, and the consequences are still played out with migrant deaths in the Mediterranean, refugees all over the region."

Asked if he would like to see Blair put on trial he replied: "I want to see all those that committed war crimes tried for it, and those that made the decisions that went with it."

Yet total denial seems to have again struck the former Prime Minister so central to tragedies beyond comprehension, which have affected millions between the embargo, war and the murderous chaos of the aftermath spread far and wide.

Speaking on the BBC's Andre Marr Show on Sunday 29th May he intimated that if the Inquiry finds he committed to the invasion before he told Parliament and the public, he might refuse to accept the verdict. He has surely not forgotten his commitment mentioned in General Colin Powell's early 2002 communication with George Bush, quoted above?

Ironically, the Centre for Religion and Geopolitics founded by Tony Blair has just published its latest Report on extremism (no reflection of course, that it does not get much more extreme than enjoining "a Crusade" as declared by George W. Bush.)

The Centre writes: "Our data shows that over the past three months, the same countries repeatedly suffered high levels of extremism." With no   hint of irony they include Iraq and Afghanistan in which Blair's Britain was integral to attacking and destabilizing. Then Syria, Yemen, Pakistan in which the US and UK have meddled, murdered, damaged and disrupted.

In Libya "ISIS has continued to gain strength", they note. The same Libya whose leader Blair kissed (a Judas kiss if ever there was one) who resultantly disarmed, was welcomed back in to the "community of nations" and was destroyed by that same "community."

It can only be hoped that Chilcot throws the book at this despicable human being and all involved in Iraq's tragedy. Whatever the findings it could never be sufficient.