Every once in a while a dynamic persona arrives on the world stage; he is one who appears larger than life. He rises above the fray even when others have lost their civility and all sense of good manners. This person stands head-and-shoulders above his peers; without exception. Not talking about a sports figure. 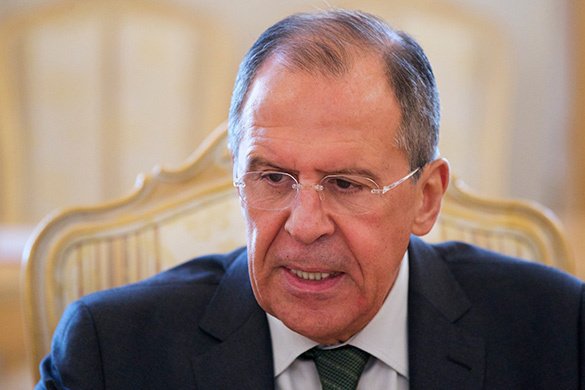 By no means is he a marquee name media celebrity. He has no particular fan following. His is not an enviable calling. None of the aforementioned would even begin to define Sergei Lavrov's greatness in terms of service to his country Russia, as well as to his devotion in advancing the brotherhood of mankind. One needs to travel back in time to find someone similar; one that could even approach Lavrov's standard of excellence.

From pledges to lies

About three decades earlier, U.S. President Bush 'the elder' dispatched trusted attaché overseas, James Baker III. His mission: assuage Bush's counterpart, Soviet Union President Mikhail Gorbachev that America had nothing but good intentions and well wishes for the disparate peoples in the impending break-up and move toward dissolution of the former communist empire. Moreover, Baker had an even more profound greeting for the Politburo; a paramount pledge that he would deliver in private to Gorbachev. If memory serves correctly, that message was an assurance: neither America nor NATO would expand their presence or increase military (missiles) 'defenses' other than where those stood during that time. James Baker's skillful diplomacy 'saved the day'.

Their tacit agreement brought renewed hope for future cooperation between the two super powers. At least that is the way that many Russians remember it. Not the same case in America though; no, not at all. Subsequent and current U.S. Administrations would engage in cognitive dissonance whenever Russia was mentioned. A prime example happened during the middle stages of America's Desert Storm intervention and subsequent illegal occupation of Iraq. The Russian Foreign Minister appeared on an American talk show.

His host, another smarmy liberal, badgered his distinguished guest with volley after volley of "You lost the Cold War". The 'journalist' harangued him about an hour. Then, Lavrov in his vintage style spoke; in seconds flat he articulated what mattered most. By extension he rebuffed the blathering boor. "Yes... That is why I am here now. Together we can discuss our differences in the open; we do so without fear of reprisal. That is a good thing".

Not much has changed

Today, not much has changed. As American effrontery rises, Russo-U.S. bilateral relations deteriorate past critical mass. It is against that hostile political backdrop that Sergei Lavrov operated over a decade and a half. During the Bush 'the lesser' years Lavrov helped elevate The Russian Federation's standing in the world community. Albeit, the former state controlled 'planned economy' was struggling to transition to the Western capitalist model.

The country itself though was united; its government was committed to implement changes; even drastic ones by Soviet measures; under President Vladimir Putin's strong leadership which included expunging the corrupt oligarchs, the country made great strides in its modernization programs. In his travels, Lavrov often provided the proper context with just the right emphasis. "Modern Russia is more than Moscow; much more. With the ongoing exploration in the eastern region including Siberia, the country's energy base has expanded to a level which allows investment in new infrastructures for future generations possible. Russia invites its partners. We welcome their participation in joint ventures; but do not mess with us."

Not all of the former Soviet states heeded his wisdom. Circa 2008, the Republic of Georgia, influenced by American NGO color revolution agitators, challenged Russia's plans for regional cooperation; the Georgians chose a different course: war. Mischievous President Saakashvili led the rebel faction. A brief battle ensued. The Georgian forces were flattened. Saakashvili fled.

Soon thereafter the scoundrel was deposed. He is now a fugitive from Georgian justice. In recent times, Ukraine stands out as another bad example where the West has provoked Russia. Prior to the outbreak of hostilities, Lavrov pleaded for reason to prevail. He urged Kiev to seek a peaceful political resolution; the junta leaders however chose escalation. Today, Sergei Lavrov is an advocate for the suffering masses. He champions the just cause of oppressed peoples, worldwide.

He voiced his concerns over war torn Yemen in the highest political echelons. His efforts finally brought humanitarian relief to the Houthis. Not surprising... When Sergei Lavrov speaks, the West should listen; they need to pay attention; his words are truth; his message is as much edifying as it is fair warning: Russia is once again a world player. Show respect.