Banana Republic! Attempted Coup in Brazil: What legitimacy has the Congress?

Last Sunday, the lower house of the Brazilian Congress, the House of Representatives (Câmara dos Deputados, or Chamber of Deputies), decided by 367 votes in favor and 137 against, to initiate impeachment proceedings against the democratically elected President Dilma Rousseff, against whom there is not one shred of criminal evidence. This is not the case for so many deputies, many of whom are safe from criminal proceedings against them only because they enjoy Parliamentary immunity. 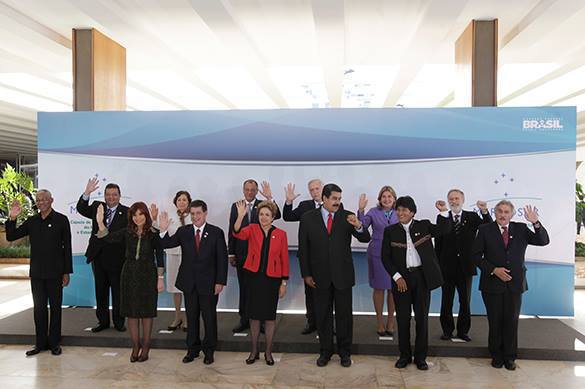 Those of us who watched the ten-hour session last Sunday, even those of us who know the Brazilian Congress personally, were shocked to the core at the show of puerile imbecility demonstrated by what looked like a bunch of kindergarten children being naughty on a school outing, a mirror image of monkeys in the zoo after someone has rattled their cage or thrown in a banana. A fitting image for what has become in the last week a Banana Republic.

Let me describe the scene in the Chamber of Deputies. After a debate, if that is what it can be called, there was a session of voting in which each "deputy" gave a speech and presented his vote in favor or impeachment or against. Just imagine - and sit down because you are going to fall over laughing - just imagine three hundred and sixty-seven grown men, many of them with criminal cases pending against them as soon as they leave Congress, that is if they do not manage to stay there long enough for the case to be declared void because the time has run out, standing up and making declarations such as this:

"I declare, for my four-year-old son, for my friends, for God, that I vote in favor!" in a silly, high-pitched whine with tears in their eyes, shaking in theatrical histrionics, when the one making the declaration is a criminal, perhaps a rapist, a murderer, a fraudster, without one iota of morals. One, Bolsonaro, even dedicated his speech to a torturer, the one who tortured President Dilma when she was a political prisoner held by the Fascists. Perhaps he would like to be tortured so we can dedicate a speech to him, "Ode to a Fascist PIG".

What legitimacy has the Chamber of Deputies?

What legitimacy has a Chamber of Deputies to impeach a President who was democratically elected by over fifty million Brazilians in a free and fair vote, against whom there is not one shred of evidence pointing towards criminal activity (at most her office presented best-case scenarios in the accounts, doing what every other government around the world has been doing, the difference being that Parliaments in other countries are not made up of the same...material...as the Brazilian Chamber)?

What legitimacy has a bunch of elitists who always had privileges in the areas of education, healthcare, security, privileges in access to employment, to judge a lady President whose work and whose Party has provided visible social benefits for millions of people?

What legitimacy has this band of self-seeking political upstarts to attempt to remove the democratically elected President of the country when the case has not been seen by the Supreme Court, when not one piece of evidence has been presented against Dilma Rousseff?

What legitimacy has the Brazilian Chamber which has allowed itself to be led by one Eduardo Cunha, the face behind the coup, the man with an alleged eleven illegal bank accounts in Switzerland, whose name appears in the Panama Papers and who himself is being investigated by the Supreme Court?

They insult the hard-working people

What legitimacy has an endemically corrupt system which involves the judges themselves, along with the parliamentarians, who receive big bucks from the lobbies which finance their campaigns and pull their strings and then close ranks protecting each other, to take any decision which affects millions of Brazilians, if they do not share their takings with the rest of the country? So they seek riches for themselves taking bribes and then speak in the name of the hard-working people? Are they insulting the Brazilian population, or what?

And now let us examine the "Special Impeachment Committee", 65 members strong. What legitimacy do these have to opine on anything whatsoever when thirty-six of these sixty-five are either the subject of accusation or else have already been formally condemned for crimes?

This disgusting filth, dirtier than anything swimming in any sewer, has the audacity to accuse a democratically-elected President who has not one single item of proof against her?

So let us investigate the histories of these illustrious Deputies and place all in the public domain. Then we shall see who has the last laugh. Meanwhile let the international community see this new Coup Brazil for what it is. These opportunists have turned the awakening giant into the laughing stock of the international community again - samba, football, corrupt politicians and a Banana Republic!! Congratulations Eduardo Cunha. And now let us investigate YOUR past and place it in public for all the world to see...