In wake of the recent terrorist blood bath at Brussels International Airport, the entire world got a huge 'wake up' call. ISIS was quick to claim responsibility. Suffice to say that there were ample warnings as to the imminent dangers lying ahead for Europe; like the past, the constant streams of ISIS threats posted on social media were ignored, even downplayed. 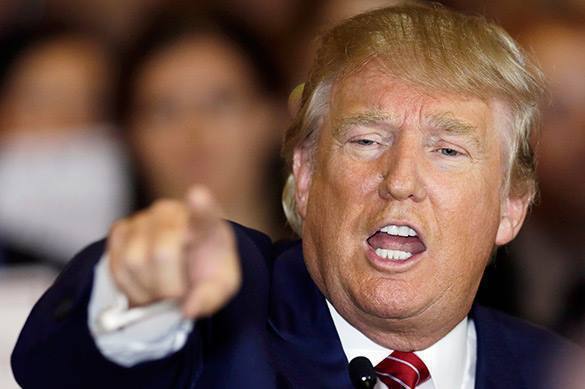 No surprise: with the media focused on the Syrian crisis, especially the 'desperate' plight of the immigrant 'refugees', the dearth of 'leadership' in Europe (and America) is now self-evident. Altogether, the pansies-in-charge in Europe and elsewhere in the West could not bring themselves to bear and then state the obvious: Radical Islam poses the greatest threat to the civilized world's security and peace; not Russia, like the current U.S. Administration keeps harping on.

Fortunately, that is not the twisted narrative that we hear from current U.S. presidential candidate and GOP front runner, Donald Trump; not at all. Unlike the establishment's boughtand-paid for politicians, Trump stands alone in the gaping breach of the global communications breakdown. As the contrarian, he takes the hardliner position. 'The Donald' is not afraid. Time and again, he speaks his mind. Whenever Trump calls 'a spade, a shovel', which is often, Americans pay attention. They recognize common sense when they hear him.

For example, Trump's exhortation to declare a ban and moratorium on Muslim immigration to the U.S. was welcomed by many concerned citizens in the American public. This stop-gap measure was needed; in re, the U.S.' southern boundary with Mexico is so porous, that logic suggests, ISIS recruits and sleeper cells were already setting up shop in America's hinterland. Enough of that crap. Those gaping access holes in National Security have to be plugged; full stop! What does Trump receive for his courageous stand?

Why he is labeled a racist by many in America's upper one per cent power echelons.

Mainstream media and the PC posse are running amok with their attack ads. Not a day goes by that Trump is not besmirched by their smear campaign of lies. Even Trump's fellow Republicans have joined the fray. The remaining lowenergy, cookie-cutter and ass-kissing Republican contenders have no compunction at all; not when it comes to Trump bashing. Cruzero and Kasich, on alternate days, play anything from the hate to Hitler comparison cards. As usual, those two losers always check the weather reports in the opinion polls before they feel that it is safe to repeat the hackneyed political memes: Trump divides. We are real conservatives. We play by the Constitution.

However, they only dare to launch their cheap barbs after they gather the courage to venture outside their comfort zones if Trump is not within earshot. Mano-y-mano is not within either's repertoire of social graces. Cowards... Across the left aisle of the American political spectrum, Democrat Hillary Clinton is now poised to represent the current Administration; more important Clinton has given every indication that its failed, do-nothing policies will continue. She will emerge as Trump's challenger.

Clinton for all purposes is no different to the rest of her ilk. Whether followers of the donkey or herders of the elephant, establishment candidates have one commonality: they are altogether beholden to special interests. Those control groups are not restricted to the domestic agenda. Some are foreign. America, Whole World Safer with Trump as U.S. C-I-C That is why Americans should loath all and anything that she spews about Donald Trump. Out of fear, Clinton will stoop to new lows to further demonize the independent, self-funded Trump. When confronted, the former Secretary of State cannot handle the truth. Trump speaks up for America. His message resonates with the people.

The 'silent majority' have a real clear voice, in Donald Trump. In short, vis-à-vis the sound thinking Donald Trump, Hillary and the truth are diametrical opposites. Moreover, Clinton claims she bears no responsibility for her litany of lies and past failures. C'mon. That is a lawyer's M.O. In the coming days, American voters should be extra vigilante; they should look to Clinton's campaign to ratchet up the lies and rhetoric against the real plain truth as enunciated by Donald Trump. The war machine is ready.

The Moveon.org propaganda howitzers are primed. Soon the artillery barrage will let loose with incendiary shells filled to the brim with the B.S. 'victim' arguments; eulogy for all the moderates followed by apology after apology. They plead the case for the world's 1.6 billion Muslims; not all are terrorists. Yet Clinton and the liberal Muslim enablers are remiss to mention the Ford Hood shooter: 20 murdered Marines; or have they already forgotten about the L.A. carnage courtesy of a moderate Muslim nice guy and his immigrant wife. How about the Boston bombers; were they just misunderstood and conflicted Chechens trying to adjust to America's hedonistic lifestyle? Obama overseas vassals Cameron, Hollande and Merkel need to listen up; pay heed to Trump's sage words. In order to stop the bleeding from the carnage, murder, rape and mayhem within their borders, Europe has to turn off the immigration flow.

The Syrian refugees are not what they claim; many are young males; they have nothing but bad things in mind for their hosts. Donald Trump saw this from afar. He raised the clarion call for common sense. Learn from his leadership; before it is too late. If you do not smell the napalm, more of your European cities could end up like Brussels...