Nothing has been same since NATO brutally bombed Yugoslavia 17 years ago. The fifth column, trained by NATO, overtook destroyed country to continue the job that West started. The economy collapsed, country was ripped and Army dismissed. 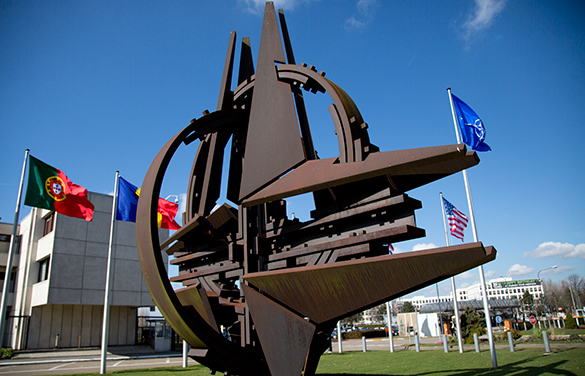 Year by year, malicious plans brainstormed by NATO and executed by government are pushing whole Balkans into deeper mug of Western imperialism. The last move was Agreement with NATO about logistics. Parliament has approved and President has signed an agreement which gives NATO soldiers immunity and freedom of moving on the territory of Serbia. Same people who killed thousands innocent civilians are now given freedom and immunity.

Furthermore, NATO personnel is exempted from payment of taxes, VAT and customs duties. The adoption of the Individual Partnership Action Plan (IPAP) allowed NATO soldiers to use infrastructure, free transit in the entire territory of the country, as well as the protection, being given a special status while staying in Serbian territory.

However, although almost two decades past since cruel attack, most of Serbs have not forgotten how important freedom is, which is the main problem for ruling elite. In the mainstream media, news about signing agreement with NATO was published as small and irrelevant. In couple sentences mainstream journalists wrote about it as it is a weathercast for tomorrow, but they couldn't fool people.

The situation was boiling. Few patriotic parties and war veterans managed to organize protest and expected not more than one thousand people in the Belgrade to show their disagreement with ruling party's decisions. On the 20th February more than 15.000 Serbs, mostly youth, came to the streets of Belgrade to join the protest. Even police was surprised, quickly trying to reinforce, in fear of nonverbal show of disagreement.

It is worthless to write that mainstream media weren't at all interested in huge protest in the capital town. They just reported after the protest that there were only couple hundred demonstrates. Among all media, just a single one, alternative and patriotic website Srbin info sent reporters to the vicinity to cover the whole protest. It was the onliest media that had pictures and videos of massive protests, which were showing the huge number of protesters.

During protest, more than 2000 readers per second were following live stream of demonstrations. Each minute, website was gaining more followers. Just a couple minutes after the end of peaceful protest, huge cyber-attacks began. The weak website couldn't defend itself from the biggest attacks in its history and the website eventually crashed down. Attacks continued for 24 hours, never letting website to repair.

The onliest possible source of the attacks on the website and freedom of the speech is ruling elite. There is no one else who would be able to manage so strong attacks. The main problem for alternative, free, media in Serbia is that web providers, most of them belonging to the company SBB, part of Soros foundation, don't want to reveal who stands behind attacks. However, some opposition forces, who also got attacked by hackers, discovered that the IP address of the hacker belongs to one of the directors of SBB company.

It is also interesting that 25 per cents of web providers and some mainstream medias in Serbia belong to American David Petraeus, former director of Central Intelligence Agency (CIA).

Despite crashed website, reporters of Srbin info managed to find way to send real story and used Facebook to spread truth. Video showing the mass of people protesting was viewed by more than 1.700.000 Facebook users, which is huge number for a Serbia, that has 7 million population.

Next 48 hours after the attack, website was closed. Thanks to the loyal readers, who appreciated Srbin info's fight for freedom of the speech, donations were collected to make a new website, that would have better protection. But, the problem of having neutral web provider, who won't sabotage website following the orders from the Government, still exists.Even worse problem is the fact that once proud and honor Serbia is now under boots of imperialists.

Here is a link where you can see photos