Islamic State and the Doomsday scenario

What follows is more than a news report. It is a glimpse through the gates of Hell and an insight into what could very well take place this Christmas in any city, town or village. Following the precept that an informed public is an alerted public and an ignorant public is more susceptible to attacks, let us follow the story through. 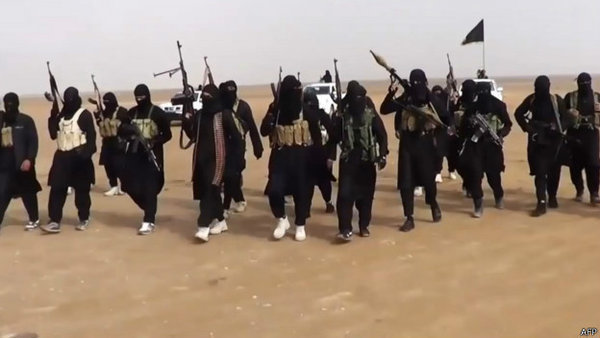 The accident and emergency wards at all the General Hospitals in the capital city and the surrounding area were overwhelmed. Patients lay in corridors, on floors; beds and stretchers lined every available space side by side, head to toe. Where there was no space for beds, they lay on mattresses. The nursing staff had long been overwhelmed and by now there were more volunteers, family members and well-wishers working among the groaning, screaming patients than healthcare professionals, the morgues full to choking point and the multi-faith hospital prayer room packed with grieving relatives.

The first case had been reported exactly two weeks previously, two Fridays before, when the mother of Ruth Watson had found her ten-year-old daughter writhing in pain in bed, her pillows and sheets covered in vomit. A visit from the local general practitioner resulted in a recommendation to take it easy for a few days, eating boiled and grilled foods. By Sunday Ruth was reporting blurred vision and the following Thursday, she died.

By then, the mothers of all of Ruth's classmates, except the Peters boys, had experienced exactly the same symptoms: terrible abdominal pains, then general lethargy, listlessness, lack of energy, all put down to influenza by the doctor's receptionists and part-time nursing staff, before speech began to get slurred, followed by blurred vision and difficulty in walking. That was when the cases were referred to the general hospitals in the area as it unfolded that not only Beeston Junior School was affected but every kindergarten, primary, middle and secondary school in the south-east region and capital city.

The Peters boys, eleven-year-old twins, remained well for a week after the bulk of the cases were hospitalized but then first Jake, then two days later Jeb, slipped into a gradual flu-like state, lost consciousness in the A and E department of Bilstoke Children's Hospital and both died within hours of one another coughing up and vomiting blood in the Infectious Diseases Hospital in the capital.

By then the health authorities were working overtime as everyone was pulled off leave and retirees were called up because now it was not only children affected, but the entire population, children and adults alike, living in a vast swathe of the south bank of the capital city. There was one fundamental mistake made by the epidemiologists, namely that the cases from the schools and on the south bank of the capital city were all related.

The first to show suspicions that there were two separate events was a Canadian intern called Mary Porter who was preparing to defend her doctoral thesis entitled "CBW (Chemical and Biological Weapons) threats against the civilian population - from fantasy to reality in a globalized world".

Taking her suspicious to the Regional Health Authority Think Tank, she claimed that the symptoms among the children were gastro-intestinal in nature, while those experienced by the Peters boys from Beeston Junior School and all the cases living on the south bank appeared to be pulmonary, the result of inhalation. Autopsies on the Peters boys, and other patients, revealed mediastinal widening and pleural effusion, confirming the results of the X-rays and the lymph nodes in the chest area showed signs of hemorrhage and necrosis, the lungs festering wounds of blood and pus, blackened and bloodied, revealing a horrific death.

Only then was a massive screening operation launched and as Porter had expected, anthrax spores were detected in the respiratory patients and tests on the schoolchildren revealed Botulism serotype H, the most deadly toxin known to Humankind with no antidote.

The mystery to be unveiled was in the details of the two events, which Islamic State soon claimed responsibility for. Investigations pin-pointed the anthrax event: National Drone Day, when for the first time, massive numbers of drones were allowed to fly at a certain altitude across the southern part of the capital and tests revealed that a sophisticated process had aerosolized and weaponized the anthrax bacillus (Bacillus anthracis), ridiculing strategists who had predicted that Islamic State probably had chemical weapons but was nowhere near developing biological ones. Not only this, the bacillus was 'weaponized' milled to the 5-micron range, and had been given an electostatic charge to ease its dispersion into the lungs. Only a high-tech and very well equipped modern Bio warfare lab could produce this.

Was the anthrax dispersed by a drone? Or by "fans" walking among the crowds and standing near vents in transportation hubs? Video surveillance revealed three suspects who were later identified. Several small vials of milled and dried anthrax were found in the apartment of one of these, along with stockpiles of Ciprofloxacin, an antibiotic commonly used to treat the disease and also prevent it taken pre-exposure. The three suspects had been administered Cipro while training at a base in Eastern Syria. By then the human cost was 772,000 deaths among the estimated three million infected.

The botulism event was narrowed down to the supplier of milk for the schools in the regional education authority and further to three specific lots coming from the same dairy-processing factory - the silo contaminated on three occasions by the addition of a few grams of the bacterium Clostridium botulinum. Employee records showed that a new Quality Assurance Manager named Q.A. al-M. had been admitted three weeks previously, and in his home was a copy of "Preparation of Botulism Toxin", downloaded from the internet and printed out.

Of the 355,000 children who were poisoned, 298,994 had died by the time hundreds of healthcare professionals were rushed to the area by international agencies and treatment was administered.

Just weeks after the most successful terrorist strike in the history of the planet, occasioning over one million victims, the secret underground laboratory near Busayrah on the banks of the River Euphrates was buzzing with excitement. The race was now on with Katibat al-B'ittar al-Libi, the Libyan branch of Islamic State, in Sirte, which was working on a massive campaign to disseminate Yersinia pestis, (Bubonic Plague, or the Black Death). The rogue scientist had delivered on his word and in exchange for one million USD in cash had provided Busayrah with a vial of Variola major. "What is this?" asked an orderly, noticing the general elation at the delivery of the vial. "Smallpox," answered a lab technician.

*Dr. S.J. Bellamy is a recognized international expert on biological warfare. She has previously developed and run NATO sponsored policy programs on biological terrorism and has published extensively in related fields. Her papers have appeared in the National Review, The Washington Post, The Washington Times, Le Monde, Le Temps and the Jerusalem Post. Over the past twenty five years she has worked in non-proliferation and contributed to UN Expert Meetings for the Biological and Toxin Weapon Convention.  She has developed and run nuclear and biological war games and scenarios supported by European Ministries of Defence.  Currently she advises governments on national strategic stockpiling and force protection.

**Timothy Bancroft-Hinchey has worked as a correspondent, journalist, deputy editor, editor, chief editor, director, project manager, executive director, partner and owner of printed and online daily, weekly, monthly and yearly publications, TV stations and media groups printed, aired and distributed in Angola, Brazil, Cape Verde, East Timor, Guinea-Bissau, Portugal, Mozambique and São Tomé and Principe Isles; the Russian Foreign Ministry publication Dialog and the Cuban Foreign Ministry Official Publications. He has spent the last two decades in humanitarian projects, connecting communities, working to document and catalog disappearing languages, cultures, traditions, working to network with the LGBT communities helping to set up shelters for abused or frightened victims and as Media Partner with UN Women, working to foster the UN Women project to fight against gender violence and to strive for an end to sexism, racism and homophobia. A Vegan, he is also a Media Partner of Humane Society International, fighting for animal rights. He is Director and Chief Editor of the Portuguese version of Pravda.Ru.