Donald Trump is electable as president, but… 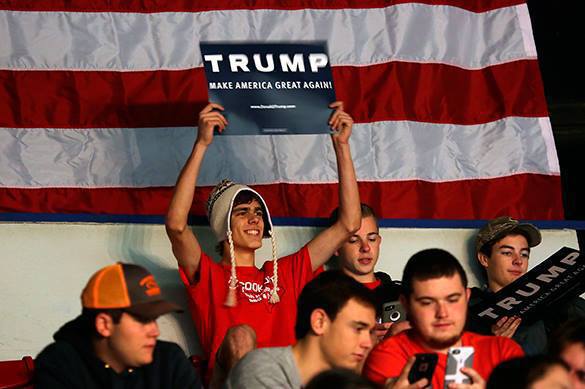 I think it is entirely possible Donald Trump could be elected President. I am not in favor of it - but then neither am I in favor of any of the other candidates on offer - yet I do think his election is increasingly possible. America displays every four years - almost like a temporary clothesline erected on the front lawn of the White House loaded with soiled and tattered undergarments - the sheer poverty of its political system. Every four years, a gang of mediocrities and thugs spend vast amounts of money to say, from coast to coast, nothing worth hearing.

Sometimes I wonder why anyone bothers to run for office in a long, costly, and exhausting contest which if won means four years of taking directions from the Pentagon and seventeen security agencies. America is not a democracy, and the last president who actually tried to exert some significant influence on affairs left much of the right side of his head in the streets of Dallas. But ego is a mighty powerful motivator, and the gang engaged in national American politics has plenty of it, even if few other redeeming qualities.

Trump could make Hillary Clinton regret she ever shared a stage to debate with him, especially a Hillary Clinton whose past has finally begun to catch up with her, now finally wounded by her long record of dark intrigues and vicious lies. Trump is no angel by comparison, but his focus has been on making money and aggrandizing his name, things most Americans respect. He has no political record for which to account or apologize.

He has said many things which make him sound like a juvenile given to insulting people's appearances, and he has some proposals which would prove impossible for anyone to implement, yet somehow he has hit on some issues which find a welcome hearing by many, especially unsophisticated people who might even once have been Democratic voters. Americans are tired of unresponsive politicians, something of which they have stables full. They are also tired of the bewildering events in a world at the center of which invariably the United States finds itself. Most Americans never voted for such things and have no interest in them. Only dishonest appeals about supporting the troops keep them from rebelling, and their own increasingly difficult economic lives generate a lot of stress. America is full of frustrated and angry people, many of them not even sure what it is they are so angry about and many of whom have no time or patience to understand the world in which they live. Hard-hitting simplicities are music to the ears.

One of the sharpest ironies of Trump is that not all of his views are simplicities. Some are dead-on assessments of things which could have been avoided and leaders who failed the country. So this man comes bundled with a wide-ranging group of political goods, far more so than anyone I can recall in recent times. Just think of the simple-minded recitals of senior American politician after senior American politician. They all sound rather like Sarah Palin reciting her money-generated mantra but with differing levels of sophistication and vocabulary. She is the basic template while other models come with little tweaks and feature, but they all say nothing worth hearing. There is a very real reason for that: under America's establishment-run, aristocratic political system, there is almost zero latitude for change either in domestic or foreign affairs, except in the field of war where more seems always welcome.

No matter what you think of Trump's views - and the author should confess he is not an admirer of most of them - many people find it utterly refreshing to hear him touch subjects none of the usual Washington politicians touch. He goes far beyond the pathetic high-school recitation of lines by Sarah Palin. Or, I might add, the paid lies of men like Newt Gingrich and scores of others who will literally speak in absurdities in return for multi-million dollar campaign contributions. I only mention Newt because the last time he tried to campaign, he ran around the country saying there really was no such thing as a Palestinian, his quid pro quo for nearly twenty million dollars in funds from a man with claustrophobic ties to Israel.

Just think of the all the bland, say-nothing-worth-hearing types, epitomized by Jeb Bush who resembles nothing so much as a well-groomed hamster both in the sounds he makes and in his blinking-into-the-camera, insipid-smile looks. And think of all the grotesque liars who run for high office in America never telling people what really motivates or enables them or what special interests pay their way. It all really is a parody of democracy.

You might think a brash and independent-minded guy like Trump is just the answer to changing some of that, and I can well understand the hopes, but there are very powerful barriers in American society as it now has come to be organized against such hopes being realized. The first day of sitting at a huge polished conference table, greatly outnumbered by arrogant country-club security chiefs with secret budgets you cannot imagine and rigid generals whose uniforms glitter almost like Christmas trees, might just test the mettle of a Trump. Add to that the heads of great corporations each worth hundreds of billions of dollars making private appointments. And then the polished heads of mighty special interest lobby groups used to getting their way. And just who are your allies and confidants in opposing some of the things they demand? You have no political background from which you would have built such relations.

It's a daunting and dreary picture, and you have to remember, these powerful people who compose the formidable American aristocracy are the very ones who allowed and encouraged the ugly situations into which America is straight-jacketed.

Despite Trump's freshness and energy, a Trump victory could prove a disaster. Not because he would flirt with atomic war, something Obama now already does regularly, or create vast new domestic schemes. Of course, the scheme of building a fence across Mexico and rounding up and returning all illegal migrants is vast indeed - a virtual moon-landing project from scratch - but this author thinks it would fortunately prove impossible. Even if the American aristocracy permitted him to pursue such a Don Quixote project, it would only be in order to gain his compliance in other, far more important and consequential matters such the vast, destabilizing, and murderous wars in the Middle East and the bullying of Russia and China.

On top of all that, Trump has made some deadly serious enemies, and number one on the list is Israel and its supporters who view him as not adequately friendly to Israel's interests.

When Trump, for example, speaks, entirely sensibly, about leaving Syria for Putin to sort out, he goes dead against a dark and costly scheme which was in part created by Israel. They want Assad dead. They want Syria Balkanized much as Iraq is. And they are enjoying the stolen, discount-priced oil they get indirectly from ISIS through Turkey.

And they don't want Russia gaining genuine influence in the Mideast, the United States being Israel's source of seemingly inexhaustible assistance, permission, and protection - the provider of vast subsidies of every kind imaginable. Moreover, Netanyahu and other leaders in Israel have long striven to have Israel assume a geopolitical role in the Mideast as a kind of miniature replica of what the United States is in the world, a bully hegemon. There's no room in that picture for Russia.

If you read the kind of columnists who are regular serve as apologists for Israel's brutality - there's at least one filling that role on the staff of every mainline newspaper - you find a universally negative attitude towards Trump. It has nothing to do with conservatism versus liberalism, and it certainly has nothing to do with human rights. The columnists use words about human rights to make their view more palatable to the general population of readers and to serve as a smokescreen for what it is with which they are really defending.

After all, Israel's Netanyahu is perhaps the world's most flagrant violator of human rights, holding about five million people completely against their will with absolutely no rights or freedoms, periodically stealing their homes and land, violating the sanctity of their religious places, and frequently just killing large batches of them - always undoubtedly with an eye to making them so miserable that they will pick up and leave. The people of Gaza are not even allowed to import cement to repair Israel's recent destruction of their homes and institutions. I simply do not know of crueler circumstances in the world completely tolerated by America's aristocracy.

There have been several ugly outbursts recently, including one from an executive of Colorado's American Civil Liberties Union who was yelling about assassinating Trump voters, words I just could not believe when I first read them.

But then in past years we have had extremist defenders of Israel propose many horrible measures including one from an American lawyer who proposed summarily killing the entire families of any Palestinian acting as a "terrorist," so the raving speech is not without precedent. The executive's words communicate the intense level of hate which simmers. I am sure this disturbed man - since forced to quit - is not the only one with such thoughts bubbling like sewerage through his mind.

Always admirers of political hamsters and gerbils as candidates with dark eminences behind them doing the necessary filth, the Bush-Cheney model if you will, or indeed the Eisenhower-Dulles or Reagan-Casey one - the Republicans will make every effort to stop Trump with backstage political manipulations, such as a brokered convention, but they may well not succeed, his position being made quite strong by the possibility of his running as a third-party candidate, and one with huge financial resources to boot.

But if they fail, and he wins, look out for the darkest possibilities.

All this is quite terrible, but that is simply what America is today, terrible.

Trump threatens to oust all Syrians from US