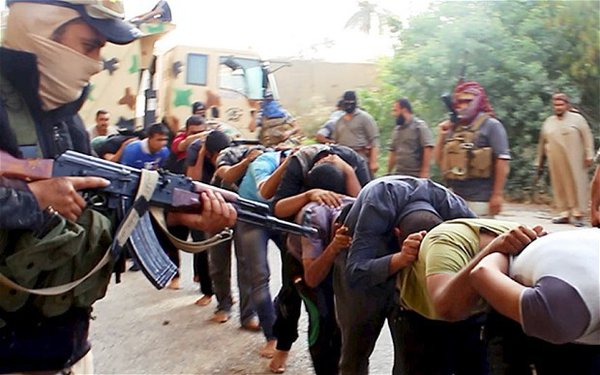 Since Friday 13 when terrorist cells strafed unarmed and defenseless civilians to death with automatic weapons, many of them women, as they relaxed after a hard week's work in the Paris nightlife, the world's media has gone into overdrive with stories of horror, terror, agony, heartbreak, destroyed lives, lost futures, misery, human despair, attempts to find meaning, attempts to find reasons, attempts to find a way forward in what has become an apparent clash of civilizations. Not forgetting the Russian airlines blown up over Sinai with almost twice the number of victims.

The bottom line in all the stories has been one acronym: ISIS, while black-clad ISIS warriors (demonic cowards) taunt and gloat, trying to recruit new recruits, sad failures without a life, the victims of tomorrow who will be used as cannon fodder as the leaders of ISIS continue to make a fortune through the sale of weapons and drugs; cannon fodder which will become guinea pigs as ISIS manages to create biological warfare weapons in its state-of-the-art factories which are almost certainly far more advanced that western intelligence services imagine.

In most cases the salaries paid to these jihadis (poor mites prized away from their families believing that fairy tales exist) go to the drugs dealer who provides them with the new whizz-drug of the Middle East, called Captagon. As the ISIS leaders know, these victims do not go to meet God in Paradise, they go straight into a state of limbo from which they are condemned eternally and will never meet God in the rest of eternity. Humanity and God have a soft spot for a martyr, but to be a martyr you need to be a victim, as Emily Davison was for the British suffragette movement, as the first Christians were when they stood and sang songs when being fed to the lions. But a martyr is never the aggressor - for these the Heavens have reserved a seat in Hell.

ISIS leaders know and do not care

But the ISIS leaders do not care. After all, they have everything going for them, for the time being at least. The ones getting bombed are the idiots they recruited, the ones in the front line getting mown down by the Kurds and Syrian Arab Army are the same fools who fell for the siren's song and promises of a better future, and meanwhile the world's media is doing a wonderful job giving them the publicity they crave.

They know very well that unless there is a massive and international bombing campaign which implacably strafes their infrastructure day and night, they are going to survive, they know that there will be growing civilian casualties; they know that an increase in terrorist attacks in the West will turn public attention away from intervention. They know that by being already 80,000-strong, they have enough fighters in the field to number more than the largest western armies and they have enough civilians to train up living within the fifty per cent of Syria and forty per cent of Iraq that they control, to make the State sustainable.

But there is a chink in the armor, a fatal flaw, a critical weakness. That is the simple fact that a terrorist atrocity is a marketing campaign and the worse the atrocity, the more successful the campaign. Which politician, which product, which country, gets prime time TV coverage for a week and headlines flashed across the front pages of the Press, worldwide, day after day after day, what subject dominates topics of conversation in the four corners of the Earth? The answer to the question is none.

Draconian prison sentences for those procuring or supplying weapons of any shape or form, unceasing and resolute 24-hour-a-day massive and comprehensive blanket-bombing of terrorist infrastructure, special forces on the ground, proper screening of "refugees" who have forgotten their documents at home but did not forget to bring their i-pads, laptops, tablets and last-generation smartphones, public surveillance equipment on every street and street corner, surveillance of those spreading hatred and intolerance of all forms, electronically monitored frontiers, duly policed, sharing of intelligence in a global anti-terror unit... and a media blackout denying the terrorists the one thing they crave.