Islamic State has committed yet another atrocity, adding vandalism and desecration of world cultural heritage to its list of crimes. UNESCO has expressed outrage over the attack on Mosul Museum and the destruction of statues and other artefacts, and has called for an emergency meeting of the UN Security Council. 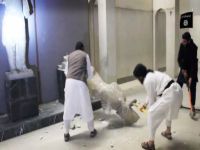 UNESCO Director-General Irina Bokova has stated that she is "deeply shocked" by this latest incident, which has followed other acts of desecration of treasures, including a library full of ancient books. Mosul Public Library was blown up last Sunday in an explosion and 10,000 books together with 700 rare manuscripts were lost forever. Recently, Islamic State attacked statues and other artefacts at the Mosul Museum, Iraq, because the pieces represented "idolatry". Large statues at the UNESCO World Heritage site of Hatra have also been destroyed, along with materials from archaeological sites in the governorate of Nineweh. One item, an Assyrian winged bull deity, which dates to the ninth century before Christ, most of the others ranging from 1,500 BC to 1,500 AD.

In January the Central Library was attacked and 2,000 books were destroyed. There have been heavy losses at the Sunni Moslem Library, at the Latin Church and Monastery of the Dominican Fathers, and Mosul Museum Library where works dating back seven thousand years were burnt.

Islamic State has declared the death penalty for anyone caught hiding materials they consider insulting to Islam.

Irina Bokova called this a "deliberate attack against Iraq's millennial history and culture", adding that "This attack is far more than a cultural tragedy - this is also a security issue as it fuels sectarianism, violent extremism and conflict in Iraq."

Security Council Resolution 2199 condemns the destruction of cultural heritage and sets up measures to stop trafficking. It has been reported that Islamic State militants have been selling artifacts on the black market to finance their activities. The 1954 Convention for the Protection of Cultural Property is an international agreement which covers significant architectural monuments, art works, books and manuscripts with artistic or historical significance, museums, libraries, archives, archaeological sites and historic buildings.

In 1977 Additional Protocols were added, of which Article 53 refers to and forbids "any acts of hostility directed against the historic monuments, works of art or places of worship which constitute the cultural or spiritual heritage of peoples" and prohibits the use of cultural property in support of a "military effort".