Predictably the upcoming long-awaited (from July 2014 to October 2015) report on MH-17 does not present one shred of evidence incriminating the Russian Federation or President Putin. So maybe those media outlets accusing Russia and her President of the downing of the MH-17 would like to stand up and apologize? 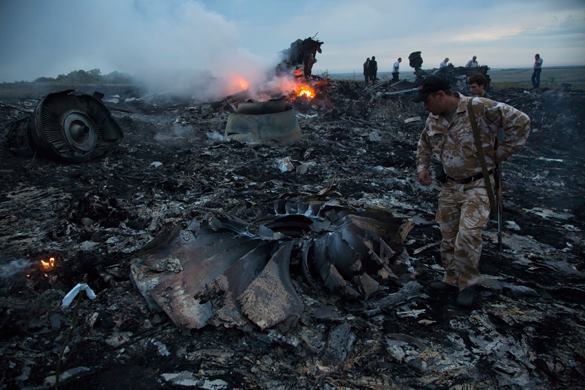 To apologize, you need fiber, morals, substance, backbone and character. To sling accusations all you need is to be a foul-mouthed guttersnipe, all you need is looseness of morals, an absence of character and a general nastiness. To refuse to apologize after slinging the mud shows pure spinelessness, spitefulness and worthlessness.

So suppose we now demand an explanation from those who were grandstaging, using the horrific tragedy, using the victims and their grief, to paint (another) scary picture about Russia? The slanderous and libelous accusations should not go unanswered.

As for the insinuations that there may be a case in the International Criminal Court at The Hague, what a joke. The following accusation was drawn up by others and by myself against NATO and was sent to the ICC. It did not even merit the courtesy of a reply, as predicted (See indictment of NATO).

And now back to the report itself. OCSE monitor Michael Bociurkiw in an interview shortly after the incident on July 17 stated that there are two or three pieces of fuselage which show indications of heavy machine-gun fire and no evidence of missile damage. The same monitor declared later that certain pieces of the fuselage looked different a few days after he had first seen them. On July 22, he stated to the BBC that certain sections of the fuselage "do look different than when we first saw them".

What about the eye-witness reports of two Ukrainian Air Force fighter jets trailing the plane at the time of the incident? How to explain the circular holes bend inwards at impact, when such holes are made by bullets from machine-gun fire? Shrapnel from a BUK missile system would have caused tears in the fuselage more of a triangular shape and would not have concentrated on and targeted the cockpit specifically. Furthermore, fuselage sections on another part of the aircraft have outward-bent impact marks, showing that the MH-17 was being fired at from two different directions.

Turn on your microphones, full blast, copy and paste this link into a fresh browser window and watch this:

That, ladies and gentlemen, is a BUK (Beech) missile system in action. Did you notice the plume of smoke behind the missiles? So why was there no plume of smoke when the MH-17 was shot down in daylight hours?

And here is the cherry on the cake. As was the case with the accusations recently that Russian missiles landed in Iran, accusations made before the missiles were launched, we have the same crass error. A videotape of the NAF (Novorossiya Armed Forces) commanded Bes was uploaded to the Net containing a supposed conversation he had about the downed aircraft, placing the time of the incident 35 minutes before it happened.

Remember the doctoral thesis copied and pasted from the Net which proved Saddam Hussein had a weapons program which posed "an immediate and direct threat to the USA and its Poodles, sorry, Allies"? Remember the forged document stating Saddam Hussein was procuring yellowcake uranium from "Nigeria"? (The country is called Niger and he wasn't). Remember Rumsfeld's claim that the USA knew where Iraq's Weapons of Mass Destruction were, namely "Baghdad and Tikrit and north, south, east and west of there"?

As for linking Russia to the "rebels" or NAF, how puerile. Is Britain responsible for the numerous British terrorists fighting in Syria against the democratically elected Government of President al-Assad? Ditto Australia, the USA, the Netherlands?

I continue not to understand why does the downed aircraft show cladding damage characteristic with pin and shrapnel warheads (air-to-air systems), much more characteristic of R-27 TOPOR or R-73 missiles used on the Ukraine military MIG-29 and SU-27 aircraft?