Flight MH 17: One year on, lies galore and zero evidence against Russia

The Flight MH 17 aircraft was precisely seventeen years old on the day of its fated flight directly over a known war zone on July 17 2014, involved in an incident which has become a study in Russophobic hysteria, manipulative propaganda and total disrespect for the victims and their families by anti-Russian agents provocateurs. 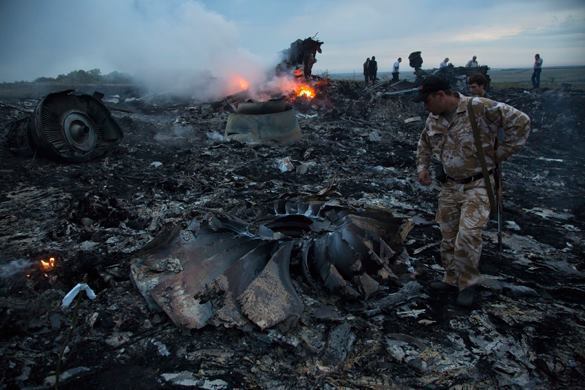 Malaysia Airlines Flight 17 (MH17/MAS17) was an international passenger flight from Amsterdam, Netherlands to Kuala Lumpur, Malaysia delivered on a Boeing 777-2H6ER aircraft which was precisely seventeen years old on its fated flight directly over a known war zone on July 17 2014.

All on board, 283 passengers and 15 crew, perished as the aircraft fell from the sky and crashed in Donbass in an area held by anti-Fascist rebel forces defending themselves against attempted genocide by the Armed Forces of Ukraine. To date the official enquiry has produced no tangible or clear conclusions.

However, the international media and the western side of the international community are brimming with stories and false accusations against Russia. The day after the crash the television stations were broadcasting live coverage of a mourning Dutch mother directly appealing to President Putin to give back the body of her child, provoking waves of false sympathy among viewers. False, because President Putin did not shoot down the aircraft, neither was Russia involved in any way, shape or form and today, one year on, there is not a shred of evidence to the contrary.

Yet casting the stone had already caused ripples on the pond. The name of the person - President Putin, soon to become "Putin" in the Western press, as Saddam Hussein al-Tikriti became "Saddam", Muammar al-Gaddafy became "Gaddafy" and Bashar al-Assad became "Assad" - the name of the country - "Russia", together with footage of a downed civilian aircraft, children's clothes and burnt toys lying in a cornfield, all components of the whole which is called public opinion manipulation. In a word, a study in brainwashing.

They could have showed footage of the Iran Air Flight 655 (IR655) shot down by the USS Vincennes on July 3, 1988, with a loss of 290 civilians including 66 children, with the message: "We have seen this before" but they preferred to insinuate it was Russia even though the incident happened over the border in another sovereign nation. It was and is this same propaganda machine which swung into action against Russia and her President that had previously claimed that Saddam Hussein was procuring yellowcake uranium from "Nigeria" using forged documents and signatures from the IAEA. He was not, the documents were false and anyway it is Niger, not Nigeria.

The same ones that showed massive "anti-Putin riots" which were in fact anti-dissolution protests at the time of the voluntary dissolution of the USSR twenty years before. The same ones that showed hundreds of bodies "massacred by Assad" in Syria, only they were pictures taken from Iraq a decade earlier, the victims of a western campaign. They forgot to show the images of western aircraft strafing fields of cereals in Iraq to create famine and murder hundreds of thousands of civilians through lack of food. They forgot to show NATO aircraft strafing Libya's water supply, depriving babies of water "to break their backs" and yes, they actually said that.

And today, ladies and gentlemen, here they are again, this time jumping on the bandwagon, disrespecting the victims and families of the tragedy in Eastern Ukraine, blaming Russia and her President for an incident without a shred of evidence, taking up the words of the apparent psychopath Arseniy Yatsenyuk, Ukrainian Prime Minister, a man filled with hatred and anti-Russian hysteria, whose supporters during the Maidan riots in Kiev chanted "Death to Russians and Jews" before agents fired against their own "side" in the crowd from the sixth floor of Hotel Ukraine to incriminate President Yanukovich.

Just five days after the incident, after sifting through all the information at their disposal, the official US position was that "There is no evidence that the Russian government is directly involved in the shooting". On October 27, over five months later, the Dutch Chief Investigator Fred Westerbeke claimed there was no evidence to incriminate the Russians.

The fact that "evidence" was cooked up, as it was in the case of the "wonderful foreign intelligence" proving that Saddam Hussein had WMD - in fact a doctoral thesis copied and pasted from the Internet from a decade earlier and then "sexed up" by Number Ten Downing Street and its cronies, once again raises suspicions as to the veracity of the Western propaganda machine, lacking as usual in any form or degree of emotional intelligence.

The Ukrainian Secret Services immediately released a tape which they claim were telephone calls made by "Russian separatists" after the incident. For a start, what is this "Russian separatists" about? They are Ukrainians and they want to defend themselves against genocide launched by a Russophobic government in Kiev, whose forces have already perpetrated numerous massacres of Russian-speaking civilians. And the tape itself is risibly amateur, being excerpts of four extracts copied and pasted together.

Meanwhile, considerable evidence was growing from the other side, the social media, namely that the aircraft had been shot down by a Ukrainian missile unit, or shot down by Ukrainian Air Force aircraft tracking the plane and believing President Putin was on board, then that there was a massive cover-up once the incident had been discovered as a false flag event. None of this is even referred to in passing.

Neither did we get the official communiqué from a US spokesperson issued on July 22: "At this point Matt, we said what our assessment is, it's a shown assessment publicly. If there is more information that it's based on then we can share, we're happy to do so, we'll continue to do that. But look this is what we know of right now. Based on open information which is, basically, common sense, right? We know where it's fired from, we know who had this weapon, backed up by a host of information that we have gathered about who did this, where it came from and what the weapon system was..."

The official position of Russia, and myself, has from the very beginning and constantly been let us show some respect for the victims and the families and not play political games with the misfortune of others, something alien to an immoral and amoral western clique of lobbyists which dictate western policy.