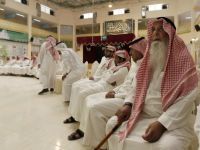 For those who like to preach about following an ethical foreign policy and for those who maintain friendly relations with Saudi Arabia while complaining about human rights records in countries such as Libya, where Muammar Gaddafi just one year ago was earmarked for a humanitarian prize for his excellent human rights record, let us examine the UNO's latest report on the country of the House of Saud.

The Office of the High Commissioner for Human Rights - OHCHR, has expressed its alarm at the shocking human rights register in Saudi Arabia today, at the beginning of 2012. Capital punishment has skyrocketed in the country - executions more than tripled in 2011 compared with the previous year, leading the OHCHR to issue the following statement through its spokesperson Rupert Colville in Geneva:

"We call on the Kingdom of Saudi Arabia to respect international standards guaranteeing due process and the protection of the rights of those facing the death penalty, to progressively restrict the use of the death penalty and to reduce the number of offences for which it may be imposed. What is even more worrying is that court proceedings often reportedly fall far short of international fair trial standards, and the use of torture as a means to obtain confessions appears to be rampant".

Last month, a woman was executed for practicing witchcraft and sorcery, yet countries such as the FUKUS Three - France, the UK and US, maintain friendly oil relations with this country and turn a blind eye to such horrific medieval practices of savagery, while for example supporting Qatari terrorists to seize Libya's oilfields.

Other practices carried out and condemned by the United Nations Organization in Saudi Arabia are cross amputation (right hand and left foot) for thieves, public beheading, arbitrary arrests (of religious minorities), deportation of migrants who are HIV positive, the banning of any form of protest, public flogging for "sexual deviance" (homosexuals) - dozens or hundreds of lashes meted out in public over a series of days or weeks.

Top of the list for barbarity is stoning of women for adultery - even if they have been the victims of rape.

And the FUKUS Three complained about Muammar al-Qathafi's record, for which the UNO was to award him a humanitarian prize but say nothing about Saudi Arabia. One wonders what Sarkozy, Cameron or Obama would say if their wives were raped on a visit to this country and then were stoned to death. One entertains the notion that the answer would be nothing whatsoever, especially if enough oil were poured down their gluttonous throats.

So much for an ethical foreign policy - or anything ethical at all, which surrounds the FUKUS Three.