Yesterday, a friend shared with me an interesting article. My synopsis follows. Canada, a G7 and long standing NATO member will soon go to the polls (October I believe). Its citizens will vote in a national election. At stake are all the parliamentary seats. The incumbent P.M., Moe Harper, remains steadfast in his hardliner stand against Russia; he meddles in Ukraine... 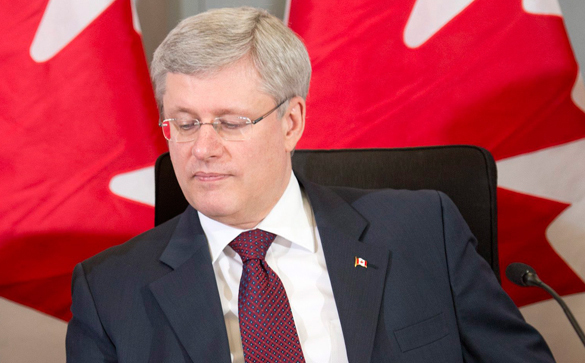 The winning party's (provided it has a seat majority) leader assumes the Prime Minister's post; by extension the P.M. appoints a Cabinet and together with their parliamentarians, they begin the job of federal governance. In the run-up to voting day two major thorny issues keep cropping up: Canada's continued support (now militarily though the ruling Conservatives allege that the Armed Services are not involved in combat operations in Eastern Ukraine) of the Kiev junta and as a member Canada agrees to not only prolong but votes to increase G7 sponsored though totally illegal economic sanctions against the 'aggressor' (alleged) Russian Federation.

The incumbent P.M., Moe Harper, remains steadfast in his hardliner stand against Russia; he meddles in Ukraine and thereby provides military hardware as well as moral comfort to the equally hardliner Kiev government that is waging a fratricidal war against the ethnic Russians in the eastern Donbass region. For certain Moe has no shame about backing criminals even in the face of facts that speak to contrary. Despite Minsk-2, the ceasefire agreement partly authored by Russia in the hopes of bringing a diplomatic solution to the already costly and deadly war (6200 murdered civilians), rather than support the international efforts to bring peace, Harper ratchets up his anti-Russian rhetoric which in turn prolongs the conflict. Stupid ... Clueless leader Moe is not alone in his belligerence. His two fellow stooge challengers, Larry the liberal Trudeau and Curly the Mad Hatter raving socialist Mulchair both chomp on the bridle to showcase their ignorance.

All three have this is common: they are rabid Russophobes. So much so, that at every rally the stooges salivate and trip on their tongues while they climb over each others' sentences in the attempt to appear the most apoplectic whenever the media pitches the Russia or President Vladimir Putin softball question. And that is all of the time. The three stooges have something else in common: they all know nothing about anything foreign other than Mexico. With the possible exception of Harper who can claim he made one or two 'photo up' visits to Ukraine to help prop up the murderous Kiev regime after the coup d'état in February 2014, together the three stooges have had no real contact with Europe, let alone Russia; so how can they claim to take a principled position on what goes on there (or anywhere in the world) other than amplify the lies they're fed by the U.S. vassal Canadian media? Especially troubling is hearing from 'ladies man', Larry. For Canada's top job, Trudeau lists as experience his time as a drama queen instructor.

It gets worse. For the past decade he led the dope campaign: legalizing pot for all Canadians young and old. And all that shows. His speeches are devoid of cogency; his sentences, start to finish are incoherent; his delivery is more akin to a 'stoner'; not the polished acumen a real world statesman practices. Verdict: Dude doesn't have the right stuff; a bad actor! Mulhair too does not possess any real substance to offer voters. Curly spends most of his campaign time spewing bluster that's rooted in 1970's failed socialist rhetoric: tax, tax, tax the rich (people with jobs), squander the purse on futile state initiatives, and then tax everyone else. Curly is also French national; he has dual citizenship. This sounds like Curly much prefers gay Paris when the heat is on. Not good.

Before casting their ballots Canadians should stop and consider each stooge's position. Even by tacit agreement all three candidates have blood on their hands: the blood of innocents. Victims whose sole 'crime' was that as ethnic Russians they rejected the criminal Kiev junta to rule over them. In turn and almost daily, pensioners in East Ukraine are blown away in their apartments by Ukrainian howitzers. School children are murdered after their playground is rained on by phosphorous cluster bombs. And those trying to flee the conflict in Donbass hardly make it to a safe haven in Russia. Their buses are ambushed. Then all those aboard are gunned down in cold blood by Minsk-2 violating Kiev battalions. Of course, Canadians see or hear none of this. Their MSM is too busy sanitizing all things Russian. Much rather, the Canadian media fawns over those two tiny, cuddly panda cubs. Next, El Nino's weather girl tweets her love for pandas. It's obvious: Canadians prefer polite over doing that which is right. Sad ... Put another way: Would Canadians approve of their own state using the same murderous tack that the Kiev junta employs in East Ukraine when dealing with the breakaway Quebec Province if they voted to secede like Crimea did? Bomb the francophones into submission? No, I think not. Then why would they take a hypocritical deportment and vote for Curly, Larry or Moe? Their hands are already bloodied. To wit, Canadians need not partake in the ongoing wanton slaughter of the innocents in East Ukraine.

Come this October, Canadian voters face a grim prospect: Which of the jokers floss? Not good choices. Serious question Canada: Where have all your good men gone? You can do better. By the way ... Moe Harper, in his zeal to punish President Putin rushed to judgment on Russia. Those sanctions, intended to harm Russia's economy were an epic fail. Instead those boomeranged. Alberta, Canada's energy rich state is about to implode. Its economy is in tatters due to fast plunging oil prices. The tipping point into the 'R' word is right around the corner. To boot, all this happened under the watch of the new socialist government; this won't look good on Moe's resume!