It's official: Canada has been assimilated

As predicted in this column just four years ago, Canada has been assimilated by its bed-partner, the United States of America. No, this time we are not speaking about hacking baby seals to death or skinning them alive, neither are we speaking about Harper's Insolence, a new disease among the international political leadership, nor are we speaking about dangerous facilities at sports venues. Ladies and Gentlemen, we are speaking about the most blatant example of political cowardice, a foreign policy which is an insult to the peoples of Canada and an affront to its history. 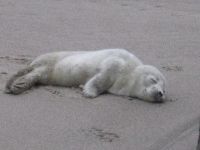 Once upon a time, Canada used to have "cujones" and when necessary, used to stand up for itself, stand up for its principles and slam its fist on the table when its neighbor to the South bowed to its customary tendency to support Fascist and murderous policies of intrusion across the globe.

Not today. On November 21, Canada joined just two other nations - predictably the United States of America and of course Ukraine, in becoming the most hated group of three isolated nations which voted NO to the Resolution presented by Russia in the United Nations General Assembly Third Committee Plenary Session:

In the ensuing vote (2) on 11/21/2014 at 3:17:57 PM, the result showed 115 votes in favor, 3 against and 55 abstentions. The three against were Canada, Ukraine and the USA. In favor were the BRICS (Brazil, China, India, Russia, South Africa) and progressive nations fighting Fascist interference and intrusion, such as Cuba, Syria, Venezuela, also those which defeated Imperialist and Fascist adventures in the past such as Vietnam and the Latin American block (Argentina, Bolivia, Chile, Uruguay, Paraguay, Colombia even, Peru, Mexico, Equador...).

Abstentions? Why, the poodles, led by Chief Poodle the United Kingdom and other NATO lackeys which did not have the guts to vote the way the hearts and minds of their populations would have wished, bringing into question how much power the people have over the way their countries vote.

We can understand why the UK and France abstained, since they fall over themselves to see who is Chief "Boot" licker (pardon the spelling) of the Moment. And we can see clearly the list of sycophantic NATO member states - you know, those that have to contribute 2 per cent of their GDP towards fulfilling NATO's annual budget. And does anyone have any idea as to what that is? Take a guess before you read the next paragraph.

NATO's annual budget, Ladies and Gentlemen, is one point two trillion USD per annum, each and every year. So it is hardly surprising to find the "abstention" vote shamefully hanging above the heads of the NATO member states and those who are queueing up to sell their souls to the European Union, just as the Putsch leaders in Kiev have done.

These "abstention countries", or "assimilated block", do not have a soul, or an identity, or a foreign policy. They cringe, cowered like a sheepdog awaiting a whistle or an order, then nod obediently as they are sent left, right and center without questioning where they are going.

The bottom line is that the world is indeed divided among those nations which represent the hearts and minds of Humankind - the BRICS block and progressive nations and the rest, split in three tiers of subservience: at the top, the FUKUS Axis (France-UK-US), supported by the ASS (Anglo-Saxon Syndicate, namely the USA, UK, Australia, Canada and these days New Zealand, the Kiwi following the Wallaby) and the "assimilated block" of soulless, spineless lackeys who do not have the guts to have a foreign policy of their own, or to stand up for what is right.

Now watch while the latter two echelons chip away at the former, using the energy, weapons, banking, food and Pharma lobbies as their cutting edge. The more I observe today's world, the sicker I feel.