For anyone listening to Canada's Prime Minister, Stephen Harper, or his Defence Minister, John Baird, blustering on about the Ukraine Crisis, one might almost believe that Ukrainians were foremost in Canada's heart, but if we examine Canadian history and study the disgraceful treatment Ukrainians in Canada have received from the 1890s to the present, it reveals the blight of Canada's past. 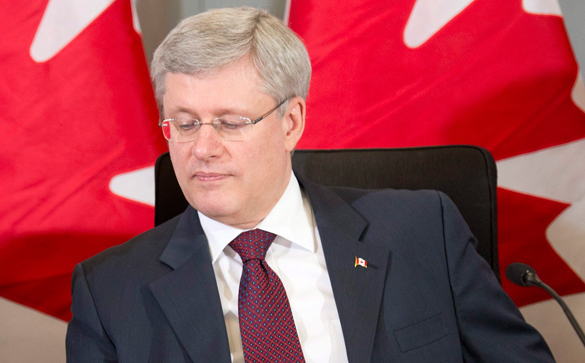 In the 1890s Wilfred Laurier's government lured unwitting Ukrainians to the Canadian Prairies with colourful, picturesque posters and promises of fertile land, but when they arrived the lands they received were largely unfit for agriculture - the best had already been taken by English and Scottish settlers. Indians, Metis and East Europeans were simply brushed aside along with harsh treatment.

With no alternative, Ukrainians were forced to eke out a living in a quasi-Siberian climate and under the harshest conditions imaginable without any assistance from the Canadian government. Ukrainians were simply abandoned to their own devices and suffered immensely.

Later, from 1914 to 1920, four thousand Ukrainians were branded as "enemy aliens" under the new War Measures Act and interned at twenty-six different camps across Canada. What little wealth and hard-earned assets they had were confiscated by the Canadian government. Ethnic Ukrainians were rounded up, confined, and then forced into labour camps for the benefit and profit of their gaolers and the provincial and federal governments of Canada for six, full years.

During this time, 109 died of disease and accidents (including women and children), six were shot dead when trying to escape and others committed suicide rather than endure their wretched conditions in the labour camps.

The harshest and most abusive camp of all was Castle Mountain, Alberta where today is found a commemorative plaque and sculpture by John Boxtel simply entitled, "Why". Beautiful Banff National Park owes much to these Ukrainian labour conscripts.

East Europeans have never been treated well in Canada and today one can count the number of Ukrainian-Canadians in important federal positions on the fingers of one hand even though they constitute about 7 to 8 % of the Canadian population. From their first entry as third-class citizens into Canada in the last decade of the 19th century, Ukrainian-Canadians have finally worked their way up to being second-class citizens in a country which so proudly portrays itself as "multicultural".

Ukrainian-Canadians who had their assets seized never had them returned nor were they ever compensated for their loss. Other internees and ethnic groups - like Japanese-Canadians in Canada during World War II - were later given apologies in Canada's Parliament by the Prime Minister of the day and paid compensation, but Ukrainians have never received either an apology or similar compensation. Today they remain second-class citizens in a country they have fought for and died for during World War II as well as numerous UN and NATO engagements around the world.

We must then ask why Stephen Harper and John Baird have such a sudden love and interest for Ukrainians. The answer is overwhelmingly simple - currying favour with an ethnic group on a current, hot topic for the next general election. Ukrainian-Canadians are simply "possible," new votes for them, nothing more.

Give Canada's Defence Minster, John "Bulldog" Baird, a soapbox and he will always emulate his American hero, Dick Cheney, whose recurring mantra was - and still is - "US good. All East Europeans bad."

Stephen Harper's and John Baird's interminable blustering about the Ukraine Crisis may fool many Canadians (and Ukrainians in the Ukraine) but for students of Ukrainian history in Canada, we grievously know otherwise.