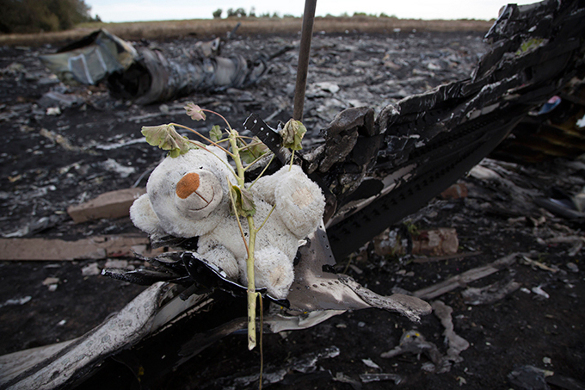 In the West anything coming out of Russia is false, fake and a lie. Minutes after Malaysian MH17 crashed Russia was to blame. So, when Channel One comes out with a video it was slammed as a lie by a country who voted for a communist president not once but twice. A photo was sent anonymously by email November 12th to the Russian Union of Engineers claiming that MH-17 was shot down by a Ukrainian jet. It was only shown as possible evidence not as absolute truth. However, I do not even have to see it because I know who the liar is.

Russia never said it was their satellite photo. "All versions have to be considered" Channel One said. Ivan Andrievskiy, the first vice-president of the Russian Union of Engineers, said the photo was made by a foreign spy satellite either American or British. In August, he goes on to say, "Russian Union of Engineers published its report on the possible causes of the accident citing that rocket and cannon was used by armament of another aircraft. There is no credible evidence of it being hit by a missile from the ground."

"I fully agree with the results of your analysis of the causes of destruction of the" Boeing "- says a man using the alias name of George Bilt, a graduate of MIT, air expert with decades of experience. The " Boeing "was shot down by a fighter jet chasing him. At first the jet fired an air cannon, then the cabin [of MH-17] was struck by an air to air missile, then the right engine and the right wing were damaged by a missile with a thermal homing system."

CIA monitors the media like hawks and went to work with their army of bloggers contradicting the obvious. Reuters, head of the propaganda machine based in the UK wrote, "Several commentators who have examined the photographs have described them as forgeries." America's CBS shovels more crap by pointing out, "the plane was shot down by a mixed team of rebels and Russian military personnel who believed they were targeting a Ukrainian military plane." The BBC proudly proclaims,"Web users debunk Russian TV's MH17 claim" where they show a photo of the wreckage with bullet holes but still say "Western investigators say the plane was likely hit by shrapnel from a surface-to-air weapon". Denial!

In a supposed interview Saturday with BuzzFeed , the man calling himself George Bilt said, "I had no knowledge or means of proving and researching if this was an authentic satellite photo or not (it was clearly available online since mid October - not really such a new discovery too)". Buzzfeed titles their article, "Russian TV Airs Clearly Fake Image To Claim Ukraine Shot Down MH17" and goes on to claim the photos are fake without calling Bilt a fake and not admitting his name is not real. If you know they are fake why an interview? FYI, Buzzfeed has plagiarists like Benny Johnson.

Of course the US, Britain and Kiev's puppet government call it fake. They are the ones who started the war in Ukraine. No offers from Obama or NATO to cooperate with Russia over this issue like Reagan and Gorbachev did in the past when their negotiations led to a nuclear treaty. Instead we get a statement from Admiral "I barely got a history degree at the University of South Florida" who explained the reason Russia is close to NATO today is because of Putin and has nothing to do with the expansion of NATO towards Russia- Rear Adm. John Kirby.

Unless you are in denial or have been asleep this century you must know of the wars America has started in the Middle East and Ukraine. How many wars has Russia started? How many troops has she sent overseas? None. Russia is close to Europe and offered Ukraine cheap gas and financial aid. That's bad business for Chevron and other firms in the West. Ukraine Deal with the Devil: The Chevron Deal. The US overthrew the Kiev government and installed their long time friend Pudgy Poroshenko.

Obama supports his puppet and Jackass Joe Biden's son was conveniently appointed to the board of directors at Ukraine's Largest Gas Co. Remember when Cheney was attacked by the media for his ties with Halliburton? Bad then but OK now. Bad for Russia to help in Ukraine but OK for US to interfere. USA hypocrisy and greed growing exponentially. Yet this is old news. Read Rothbard's book about US economic conquest in "Wall Street, Banks, and American Foreign Policy"

"Of course, Obama himself is deeply in the pocket of the finance industry. Goldman Sachs accounted for over $994,000 of Obama's war chest. Lehman Brothers was the origin of $395,600, a record amount for the company second only to what Hillary Clinton received...in 2008 that Obama's fat-cat donors included top executives from Wachovia, Washington Mutual, Citigroup, Deutsche Bank, Merrill Lynch, Bank of America, J.P. Morgan, Chase, Morgan Stanley, and Countrywide."

"Hope and Change" meant new hopes and riches for the elite who like Gruber calls American people stupid. Jonathan Gruber, the creator of Obama Care feels it is necessary to deceive the stupid American people. Keep in mind Obama prides himself in being the most transparent government in history. Liars to the core. Wake up America. Your government cannot be trusted. It is run by the corporate elite and your computer voting will not get it done. The Republican's compromise brings no hope because they are bought and paid for as well.

I will never believe news from a country that is after a "New World Order" and starts wars and violence around the world. Recently, General Numbnuts McNeely of the Pentagon, freely admitted in this video by Vovan222prank that he will send instructors to train Kiev Ukrainian troops. Those same troops have been attacking priests and innocent people of SE Ukraine who want independence. The US even has a bill S2277 to overthrow Russia and support NATO. Should I believe a country and her media that is hostile not only to Russia and her interests but the world itself?

Can I believe someone who still commits the Soviet mistake like Obama? CNBC anchor Geoff Cutmore said,"President Obama has accused you, as you know, of untruths when it comes to supporting some of the separatist groups in Ukraine..." President Vladimir Putin responded, "Who made him a judge? He's not a judge. Why doesn′t he get a job in the judicial system then and work there? I don′t think Mr. Obama is accusing me of anything. He has his own perspective on certain processes, I have mine." "He has his own perspective" means Obama has a reason to lie about the situation in the Ukraine.

President Vladimir Putin has encouraged foreigners to investigate the crash site and the OSCE did go there. He has asked foreign observers to monitor Russia's voting process and they have come. Putin has helped the Church and defends it and is free to speak of his Christianity. We are free here in Russia where whistleblowers like Snowden find refuge. So it does not matter if the recent photos are fake. I know what the US is after in Ukraine and they are not sending humanitarian convoys like Russia did into Donbass. I have never believed a liar especially a greedy one. "The Land of the Free" is no more. The "Land of the Tsars" is where Christ still reigns.