MH 17: Some conclusions - Did NATO try to murder Putin?

Let us all begin by stating that the focus of this tragedy must be condolences with and respect for the families and loved ones of those who lost their lives in the incident in South-East Ukraine on July 17. That said, name-calling, grand-staging and mud-slinging merely underlines the lack of moral fibre among those who stoop to such tactics. 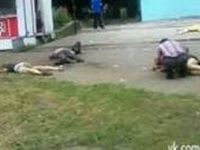 Right on cue, the western media was ready with fiery headlines, either blaming Russia directly, or Russia's President (absurdly) or else blaming anti-Kiev forces in South-East Ukraine, without a shred of evidence, as usual parading hearsay as fact, peddling "someone heard someone say" as the truth, and as usual manipulating and shaping public opinion, always against Moscow.

On July 17 the Malaysia Airlines Boeing 777-200ER, Registration 9M-MRD, Malaysia Airlines Flight 17, crashed 60 km. east of Donetsk near Hrabove village in Ukraine with 298 people on board (283 passengers and 15 crew). Flight MH 17 departed Schiphol Airport, Netherlands, at 12.14 local time (10.14 UTC) bound for Kuala Lumpur, Malaysia. Airborne at 10.30 UTC, by 10.53 UTC it had reached a cruising altitude of FL 310, climbing to FL330 after entering Ukrainian airspace, the altitude it was flying when last contact was made at 13.19 UTC.

The following is a breakdown of the nationalities of the victims:

No balanced appraisal made by a responsible person or news outlet worth reading will jump to conclusions yet as to who or what is to blame for the incident, until a thorough and objective investigation is launched and concluded. The anti-Kiev forces operating in the area were quick to state that they support such an investigation.

For its part, the Russian Defence Ministry states categorically that no units of the Russian Armed Forces were involved in the incident (of course, why should they be anyway because Russia does not control events in Eastern Ukraine, neither do the Eastern Ukrainians need Russia to pursue their goals):

"One should pay attention to the fact that Boeing 777 was conducting the flight beyond the range of air defense systems of the Russian Federation. The aircraft was flying in the airspace of Ukraine, under the control of its air traffic management system".

"In view of the objective investigation of the air crash of the Boeing 777 that crashed on the territory of Ukraine, it is necessary to conduct thorough investigation with the involvement of representatives of all interested international organizations. According to the Russian Defense Ministry, there are units of the Ukrainian Armed Forces on the disaster area; the units are armed with anti-aircraft missile systems Buk-M1. In the area of northwestern outskirts of Donetsk, divisions of the 156th anti-aircraft missile regiment of the Armed Forces of Ukraine are deployed, with 27 Buk M1 complexes. These complexes, on their tactical and technical characteristics, are capable of detecting air targets at distances of up to 160 kilometers and striking them at all altitudes at a range of over 30 kilometers. Moreover, in the skies over the Donetsk region, aircraft of the Ukrainian Air Force equipped with different types of missiles are constantly present. This is an undeniable fact.

"Statements from official Kiev saying that those complexes or aircraft did not open fire on air targets raise serious doubts. In such a short period of time, making such unequivocal conclusions under the conditions of fierce fighting in the area is impossible. Such responsible statements that entail serious legal consequences, require full investigation".

1. The story of the Ukrainian Air Force fighter jets reportedly seen accompanying MH17, the fact that eye witnesses claim they heard shots before the explosion and the taking over of Air Traffic Control by unknown persons (2);

2. The rumors that President Putin was believed to be flying over the same route at the time: Malaysia Airlines confirms "A flight from a different carrier was on the same route at the time of the MH17 incident" (1). Sources who have asked not to be named have claimed that the Russian President's aircraft has very similar contours and coloring to MH17 and that both aircraft intersected at the same point and altitude at a similar time. It was 200 miles behind MH 17. In the event it did not fly over Ukraine, but the trajectory could have fooled those who wanted to murder President Putin. NATO?;

3. Kiev's wrath against anti-Kiev commander Bes, who operates precisely in the area of the downed jetliner and the video tape of a supposed conversation between him and subordinates, uploaded five hours after the crash but placing the time of the crash 35 minutes before it actually took place. The log of the video shows it was made on July 16, so one day before the incident took place (3);

4. The video of a recorded conversation between a Ukrainian military pilot and command flying in the area at the same time (3);

5. The question of the BUK-M1 9K37 (Gadfly/SA-11) Missile system, which is a sophisticated piece of weaponry. The BUK surface-to-air missile system was developed in 1979. It consists of a Target Acquisition Radar (TAR), a Transporter Erector Launcher And Radar (TELAR) and a Transporter Erector Launcher (TEL). It is not a hand-held or shoulder-launched missile one can buy for 50,000 USD from any arms dealer. It is a sophisticated piece of equipment used by States.

If the anti-Kiev forces did use such a system, then those who use a BUK-M1 know how to differentiate between a military aircraft and a civilian one. A trigger-happy pilot might not.

6. The South-Eastern anti-Kiev forces have stated categorically that their own missile systems do not operate above 10,000 feet, much less at over 30,000 feet.

7. Why was the aircraft flying over a war zone, where ten aircraft have been downed recently (4)?

9. Why does the downed aircraft show cladding damage characteristic with pin and shrapnel warheads (air-to-air systems), much more characteristic of R-27 TOPOR or R-73 missiles used on the Ukraine military MIG-29 and SU-27 aircraft?

How can any serious western news outlet start a blame game before all these issues are investigated? Over 1,000 civilians have been murdered by the Kiev regime in recent months. Military hardware is being used against civilians (a NATO modus operandi). Just today, the Kiev Junta murdered 44 civilians (women, children included) and wounded 255 others, in Lugansk. Random shelling.

And a western "news" outlet runs a headline "Putin's missile". Apart from sheer, sh*t-headed stupidity by a like-headed outlet for like-headed readers, what a total lack of respect for the victims and their families, trying to score points from a tragedy. After Iraq, after Libya, after Syria, would anyone seriously rule out a NATO attempt to murder President Putin?

The answer is not a categorical YES, or NO. It is an investigation. One thing is clear: President Putin was not responsible, for which reason the British news outlet running that headline should be sued? Or lose its readership. Nah! Not in the UK. It will be seen as an authority.