Tolerance and reconciliation, the keys to peace, inclusion and development

Senior figures from the United Nations came together with religious leaders this week to hold high-level talks on the need to create peaceful and inclusive societies where children are born in a world free of hatred, division and exclusion. The key words were togetherness and tolerance, without which there is no reconciliation or development. 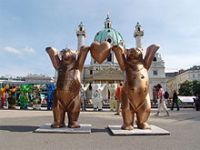 For those who update themselves on the latest news with regularity, we do not need to go into many details to see that the world we live in is far from balanced and increasingly, is a place where a growing number of us who care about spreading global values do not wish to be and have no pleasure whatsoever in living here.

Poverty and hunger continue to be a daily reality for almost one seventh of the world's population - nearly one billion people; hunger kills more children, women and men every year than AIDS, malaria and tuberculosis, combined. Children are not born with equal rights and opportunities but rather, their chances are defined not by merit but whether they are born on one side of an invisible line (called a frontier) or the other.

The world of the haves and the have-nots

Increasingly, the "haves" are growing wealthier and the "have-nots" are more and more excluded in intolerant, exclusive, marginalizing societies fraught with hatred and religious, racial, gender-and sexuality-based bigotry. Neither are these ills the daily reality of those living in far-flung "tropical" countries thousands of kilometers away from those reading these lines - up to one third of families in so-called "developed" countries are living near or below the poverty line, and growing numbers of children turn up at school without a meal inside them or one to go to when they get home.

Education has been turned into a business, healthcare has become a lottery, regular dental care has all but disappeared except for the rich top third of the population, getting a home and job have become a drama and a luxury, keeping the home another drama and keeping the job, a matter of how deep into slavery an employee wishes to place her/himself. Our beautiful home, which Mother Nature gave to us to enjoy, a place called Planet Earth, together with its wonderful array of flora and fauna - our brothers and sisters who we are supposed to share this place with - is increasingly uninhabitable as large swathes of pristine forest are destroyed to make way for the corporations to grow richer. Not only is the Earth being destroyed, also the subsoil, the seas and even space. Humankind has turned the entire ecosystem into a toxic waste-dump infested by the destructive parasites we have become. Even our food chain has been raped by corporate greed and a growing number of products on our supermarket shelves are nothing short of toxic and dangerous.

If someone had told me forty years ago that this would be Planet Earth, 2015 I would have predicted it was the result of nuclear Armageddon, a meteor strike or an invasion from Mars. But what I write above is the tip of the iceberg and there is nobody else to blame except the inept global political leadership, the spineless public in general and principally, the evil corporatist cliques holding the reins of policymaking below the former and ruling the latter.

The role of the media

There are solutions and to arrive at the cure we have to analyze the symptoms to diagnose the treatment. It is hardly surprising that hatred and intolerance manifest themselves increasingly among ever-younger populations since a basic survival mechanism of living beings, at least on this Planet, is to protect the status quo, which is the collective identity of who we are and how we behave. This runs through codes of behavior called religions, defining our God, what It stands for and the rituals we perform when we worship; it also runs through dress code and on another level, the cultural expression which a young person follows or the soccer team s/he supports in the quest for this mass identity. Given the existence of this social regimentation it is therefore not that difficult to motivate or contaminate whole sectors of society, whole countries or even regions.

Three hundred years ago, it was the work of the Town Crier, or Bellman, to disseminate the news and as time went on, news pamphlets appeared and developed into newspapers and in tandem with technological developments, media outlets became audio-visual as well as printed and are now also digital. They have the power to reach far and wide.

How do we expect an average child to grow up balanced if s/he has witnessed at least one hundred thousand scenes of extreme violence on these same media outlets by age twelve, when video games cater for the development of primary emotions through the manipulation of gore, shock and awe, when the average child grows up increasingly without the permanent parental guidance her/his structure as a living being needs and when the development process is interfered with by others who have from an increasingly early age fallen out of the net and become sociopaths?

How can we say a child has equal rights at birth if bad governance and corruption (and here we remember the corrupted but conveniently forget that for every corrupted, there is a corruptor) neuter any initiative of goodwill or any projects for development? How can we say children have equal birthrights if the education system has become a business and whether or not you get a higher qualification depends on how much money your parents have, or have stolen?

And if we do not start at the beginning, with equal birthrights for all, girls included, then how can we begin to speak about tolerance, how can we have reconciliation or inclusion if intolerance created the problems in the first place, how can we have development when certain countries insist on deployment of troops and the destabilization of regions because they want to sell oil to China or steal Libya's resources (just look at the place today) and so how can we live together in peace?

The conclusion is that the History book does provide us with lessons; the laws of physics, at least on Planet Earth, tell us that to every action, there is a reaction and the story of socio-political activism shows us that after a string of victories, those among us who have the drive to become political players or opinion makers sit back and think their battles have been won.

I believe there are enough battles referred in these two pages to keep generations of activists busy for centuries to come. Let us remember that the work of a Politician and global Policymaker (Capital Ps) just like that of a journalist, is judged in the same manner as that of a chef: you are only as good as your last meal.