The treatment of women in Egypt, especially in public spaces, is as deplorable as it is unacceptable, with sexual assaults becoming rife. Instead of raping women, Egyptians should be placing them in positions where their voices can be heard, voices of stability, of debate, of dialogue and where they can express themselves without fear. 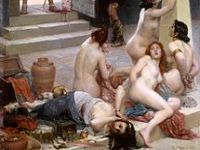 What is happening in Egypt is the pinnacle of the Arab Spring Project conjured up by interfering, meddlesome foreign powers which had imperialistic designs on the Middle East and its resources and a rosy-colored vision of a complex region, the likes of which those in the corridors of power in Washington and its satellite poodles, London and Paris, will never understand.

The result in Egypt was a Mohammed Morsi and a Moslem Brotherhood which tried to go too far, too fast, performing as spectacular a mission creep as the FUKUS Axis (France-UK-US) did in Libya and which stretched Egyptian society to the limit. The result of that has been two days of violence leaving 30 dead and 1,000 injured on July 8 and 51 dead and 300 injured the following day.

Alarmingly, the plight of Egypt's women has taken a downward turn, with behavior spiraling down into the realms of savagery and barbarism - a growing number of women are becoming terrified of participating in public life due to the prevalence of sexual assaults against them in public spaces.

Lakshmi Puri, the Acting Head of UN Women, has issued the following statement: "Egypt's women have been at the heart of the vibrant civil society movement that continues to press for the rights of all Egyptians.  Their participation in public life and the inclusion of their needs and priorities in any political solution is a prerequisite for inclusive democracy in Egypt.

"UN Women is concerned by reports of the high prevalence of sexual assaults against women in public spaces.  UN Women adds its voice to calls on all parties to take a firm stand and show zero tolerance for all forms of violence against women and girls. Egypt's women have the right to fully participate in political dialogue without fear or threat of violence.  Their voices are essential to a peaceful and prosperous Egypt".

In other areas, the empowerment of women has led to spectacular successes in preventing conflict, due to the fact that their voices are those of reason and resolution. Indeed the UN Security Council Resolution 1325 on women, peace and security recognizes that the involvement of women in decision-making processes can strengthen prospects for sustainable peace and confirms their contribution to peacebuilding.

While the rest of the world is adopting this civilized approach, Egypt's women are increasingly being sexually molested, so much so that a growing number of them are afraid to participate in political rallies for fear of being raped. The appearance of gangs of men surrounding women in crowds and then gang-raping them has become commonplace.

The number of recorded cases of mob sexual assault in Tahrir Square, Cairo and in front of the Presidential Palace in July is a staggering 173. The attacks are becoming increasingly violent: a woman was recently raped with the barrel of a gun.

The UN Office of the High Commissioner for Human Rights has warned the Egyptian authorities that incidents require transparent investigation. Let the women's rights groups take up the challenge: are we going to stand back and do nothing, or bring the pigs perpetrating this outrage to justice?

The action starts with Egypt's (civilized) males, in manning up to protect their womenfolk from the barbaric hogs in their midst.