What a wonderful title and what a noble goal to aim towards, at a time when the world should already be pulling together, pooling resources, spending on development and not deployment, respecting cultural differences and celebrating universal values in the beautiful home we all inhabit as brothers and sisters. 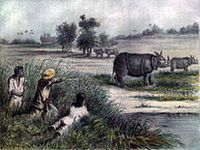 Some bastard murdering a rhino

How many World Days do we have? And what difference do they make? The answer to the first question is many, and to the second, they serve to keep the flame alive, at the very least. They are flag carriers in a world in which civilization and goodwill is being constantly challenged by those who wish to impose their values over others to feather their nests, to further their interests and to pander to the whims of the lobbies which aim to make a profit at the expense of the citizens of the world.

The World Science Day for Peace and Development was proclaimed at the beginning of the new millennium before the outrage against Iraq, before the ensuing outrages against Libya and Syria and the Ukrainian Putsch which sparked off the unrest in that entire region: if President Yanukovich were still in power, as agreed, there would have been no such Fascist massacres and the following uprising and indignation of Russian-speaking Ukrainians.

The idea of World Science Day was noble, namely to pool resources, respecting cultures and creeds and proving that the more we pull together, the more we advance as a People and the stronger we become, respecting the beautiful Home Mother Nature has given us and helping out those brothers and sisters living around the shores of our common lake, the Seas, who have less resources. The idea was a multilateral approach, an egalitarian and fraternal one, over a top-down, unilateral and selfish focus.

This, in a world in which the supply of food has become an exercise in criminal manipulation by those who control the food supply lobbies, mainly meat, in a world in which despite the fact that the Americans have to knock on Russia's door every time they want to get into space, the same USA is orchestrating sanctions and bad will against Moscow. Talk about biting the hand that feeds you. Antagonism, belligerence, chauvinism. Business interests over the common good, Excel sheet governance over welfare.

The question is, do we really have time for this model of international relations? Was this the model we envisaged for the third millennium of the Christian era? I think not.

At the Millennium Summit, it was hoped that the developed world would act like an older brother or sister for the developing nations, making sure that sustainable development and basic services were a birthright for all. Equal opportunities for every child born on this planet. An end to sexism, racism, exclusion, marginalization.

Gender equality. Rights for all, respect for our environment, including its inhabitants, our fellow brothers and sisters, the animals we share our home with. Social awareness programs pushing noble ideals and lifestyles such as Veganism as part of our respect for our planet and those we share it with. Universal education, universal healthcare.

Heads nod in agreement. For a second. But then again, Humankind, the abortion that Nature failed to eliminate when it could, when a tree shrew came down to Earth and developed a freakish thumb, is not about cohabitation, common values and equality, fraternity and liberty.

It is about symbolic control, it is about imposing the will and power of a group over others, it is about skullduggery and subversion and manipulation, a cynical exercise in so-called friendship when what really happens behind the scenes is the opposite, as we collectively murder our cohabitants of our planet, pollute its land and air and seas, destroy species before we meet them, desecrate vast areas, rendering the habitat of so many animals and plants unusable, and therefore consigning them to extinction.

The same approach, unsurprisingly, is practised among fellow humans. It therefore comes as no surprise to discover that we are losing at least 10,000 species of animals and plants every year, some of which could provide us with cures for the world's worst diseases, or rather, could have provided. It comes as no surprise to learn that collectively, we spend 1.7 trillion USD a year on weapons systems, 1.2 trillion of this accounted for by NATO.

The motto of the World Wildlife Fund is "Building a future in which humans live in harmony with nature". That is not going to happen. Humankind is incapable of any World Days for Peace and Development. I would argue that in terms of claims for the right to inhabit this planet, or any other, its claim is the least valid of all. Ask the millions of species this abomination has rendered extinct.

I, personally, feel disgusted to be a human being and an inhabitant of this planet at this time. The only reason I stay here is to try to network and find others who are sincere about making this a better place for all of us, and those we cohabit out beautiful home with.