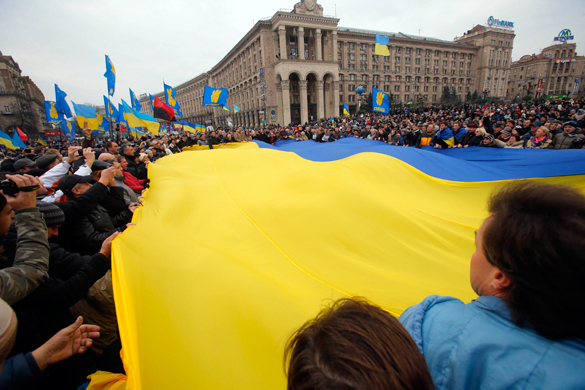 When politicians discuss history, they usually talk nonsense. In a formal, logical sense, of course, because whatever they are really saying is hidden below the nonsensical surface. For politicians, history is merely a tool, a vehicle that serves both to hide and to convey their true message.

Politicians of a country in crisis often talk even more nonsense than others. That is because they are under pressure. Money is running out, personal safety is on the line, people are out in the streets shouting for bread and justice. Whatever the nonsense politicians are talking under such circumstances is exacerbated by the fear that their foreign sponsor may consider pushing forward a new henchman to take over their position.

Look at Poroshenko (or whatever his real name is). "Hitler and Stalin started World War II" he is reported as having said recently. (Obviously, this is a very crude way of declaring to stand in the middle of the political spectrum). If "Porochololate" would not be the leader of a US-sponsored neocolonial puppet state, I would gladly offer to teach him some history and historical understanding. And I would even offer it to him on a discount, because I would feel sorry for him and the country he leads. Yet precisely because he and his country have fallen in the claws of the US (a nation without any historical consciousness whatsoever), Poro and his people seem beyond salvation. Indeed, Poro and his buddies apparently have lost all sense of direction. They have had their echochamber (the Rada) adopt a decree outlawing nazi (fascist) and communist symbols. Yet at the same time the Kiev regime employs an outright fascist army unit (Azov Batallion) and has been taking on board all sorts of fascist thugs. How odd indeed! How contradictory!

It could be taken right from a US textbook on political practice: you do exactly what you loudly accuse your enemies of doing. Thus the US has been using "democracy" and "liberation" as cover-ups and pretexts for extending its empire. They claim to bring democracy yet they install autocracies and dictatorships. They claim to be liberating nations yet enslave them. It is an age-old dialectical trick practiced at least since Roman times. After all they claimed to bring peace but it really meant perpetual war. In this light, it is perhaps unfair to blame Poro and his buddies for saying one thing and doing the other.

Oh and the there is this wall. Ukraine is currently erecting a wall (or fence) on its border with Russia. This is the height of historical folly. In case it is to keep people out, just think of how effective the Great Wall of China was, or the Roman limes. If it is to keep people in (understandable since the Ukraine has lost over 20% of its people since it became "independent" in 1991), think of how effective the Berlin Wall was and the political and social damage it has caused.

And who is providing the money for this harebrained project? Why, the Polish government! If ever there was a nation that does not deserve to be a sovereign state, it is Poland. Here you have another piece of evidence to support this view: already once before in 1939, the Polish government of Smigly-Rydz maneuvered us all into a World War and here they are at it again!

As for the Ukraine, it is a pity the country has become a US-neocolony, on the verge of being totally pillaged in a terrible way. In order to prepare the terrain for this massive plunder, the Washington regime has even appointed a US citizen as minister of finance in Kiev.

Recalling the words of French statesman Georges Clemenceau "'Americans' are incapable of abstract thinking, nor can they make decent coffee," my advice to Poro and his friends would be to kick out the US while they still can. I know they drink a lot of tea in the Ukraine, but I also know that few things can make one so depressed as drinking what US people call "coffee!"