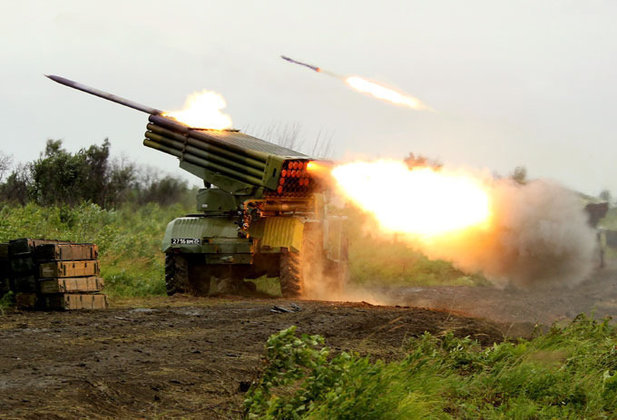 For he who can be, and therefore is, another's and he who participates in rational principle enough to apprehend, but not to have, such a principle, is a slave by nature.

When the confederation of Yugoslavia split up in the early '90s, part as a result of internal systemic contradictions and part as a result of the foreign policy of US, the Albanian population living in Kosovo started to express openly the desire for full independence from Belgrade and to build up an army for future defence. When the war started, both parts involved in the war, were being helped by other countries: Serbia by Greeks and Slavs in general and Albanians of Kosovo mainly by Albania and afterwards by NATO, with weapons, officers and volunteers, which resulted in thousands of innocent victims and destruction for both countries. The direct help of Albania at the time was considered generally by the West normal since Albania helped its own population but the indirect help of Russia in Eastern Ukraine is considered 'aggression'!

Although the war is not man's nature, since man can use his own reason, instead of war and if it occurs, a population must fight on its own capacity, and not by seeking the help of others, particularly by those who accompany the general power of transnational corporations and banks, namely, G7 countries and the corresponding elite, the Albanians of Kosovo were "liberated" from Belgrade mainly by their own efforts.

However, today Kosovo lives under another dictate: the dictate of the New World Order (NWO) of Neoliberal Globalization (N/G) and the population is suffering the consequences of it: mass unemployment, poverty and emigration is the new pattern of Kosovo. At the same time, part of the public wealth is being sold off to TNCs and international banks and another part is in the process! The unification of Kosovo with Albania is not being endorsed by both, Washington and Brussels, on the one hand, and Serbia and Greece, on the other. Russia, after the peaceful unification of Crimea with Russia, is using the case of Kosovo against Washington and Western Powers in general, but, at the same time, it endorses the rigid stance of Belgrade. The main political parties in Kosovo (also in Albania) are puppets of Washington. Only the movement of "Vetëvendojse!" (meaning, "Self-Determination") enjoys some kind of independence from western powers. But it lacks a political project in order to take out the country of the vicious circle created by the Trans/national Elite in the last decade. This in itself makes the country vulnerable, hopeless and colonized.

But, since 2012, we are witnessing another European war: the war in Eastern Ukraine, which was instigated completely by Washington. It aims at undermining the Russian power and of the Eurasian Union since Putin is resisting the NWO of N/G and is in the process of consolidating the Eurasian Union. From the beginning of this war, Russia has been reluctant in using the international law, namely, the right to Self-Determination of every country in the world, not just in theory, as does Washington, which undermines the sovereignty of the people all over the world whenever they don't conform to Washington's interests, but, most importantly, in practice. This was shown even in the recent "Minsk agreement", in which, Russia, following the conquest of Ukraine, by the Kiev Junta, installed by Washington, and thousands of innocent victims, left the region in the hands the same regime, adding "special status" and "permanent privileges" for Ukraine's rebel provinces, which, as Fotopoulos points out, 'would not give these provinces the right to object to any major foreign policy decisions'.[1]

Thus, not only this agreement disregards the heroic efforts of the Russian population in Eastern Ukraine and of the victims, but the right for Self-Determination is being denied completely! No wonder that western analysts, while ignoring the causes of the war, the goal of Washington, and the conception of self-determination, characterize the "Minsk agreement" advantageous to Russians![2] Without qualms, in the aftermath of the agreement, Britain, following Washington, namely the mission on NATO in Ukraine and generally in Eastern Europe, will send a mission of 30 trainers with 25 providing advice on medical training, logistics, intelligence analysis and infantry training. A bigger programme of infantry training is expected to follow soon after taking the total number of trainers to 75, while preparing the next phase of sanctions against Russia.[3] This mission is justified on the assumption that Russia is going to annex the eastern region of Ukraine. But, as a shrewd and honest analyst of the traditional left argues in The Guardian:

As 20th-century history shows, the dispatch of military advisers is often how disastrous escalations start. They are also a direct violation of last month's Minsk agreement, negotiated with France and Germany, that has at least achieved a temporary ceasefire and some pull-back of heavy weapons. Article 10 requires the withdrawal of all foreign forces from Ukraine. But Nato's hawks have got the bit between their teeth. Thousands of Nato troops have been sent to the Baltic states - the Atlantic alliance's new frontline - untroubled by their indulgence of neo-Nazi parades and denial of minority ethnic rights. A string of American political leaders and generals are calling for the US to arm Kiev, from the chairman of the joint chiefs of staff, General Martin Dempsey, to the new defence secretary, Ashton Carter. For the western military complex, the Ukraine conflict has the added attraction of creating new reasons to increase arms spending, as the US army's General Raymond Odierno made clear when he complained this week about British defence cuts in the face of the "Russian threat"...There certainly has been military expansionism. But it has overwhelmingly come from Nato, not Moscow. For 20 years, despite the commitments at the end of the cold war, Nato has marched relentlessly eastwards, taking in first former east European Warsaw Pact states, then republics of the former Soviet Union itself. As the academic Richard Sakwa puts it in his book Frontline Ukraine, Nato now "exists to manage the risks created by its existence".[4]

In this context, Russia, not only has to help its own population in the region without hesitation, as my own country did more than ten years ago, knowing that the Kiev Junta is being armed and trained by Anglo-American powers,[5] but it ought to, parallel with it, use the international law for Self-Determination for every People of the world. This becomes crucial not only in relation to the people of Eastern Ukraine but more importantly, in relation to the Eurasian Union. If Russia uses and supports this right, all subordinated people of Eurasia will follow and will support the Union while at the same time, supporting all political organization within Europe and America which embrace a comprehensive political project, who, while opposing western elites for their expansionist policies - liberate themselves from the system of modernity, namely, representative "democracy" or the outright kleptarchy and the market economy, which threatens the life of the planet.

Finally, the killing of the leader of the Russian opposition, Boris Nemtsov, who couldn't challenge the legitimacy of Putin's government during the last two decades or so, since Putin enjoys broad support for his policies in his country and, moreover, who has been sponsored by US - by promising them the privatization of state and most successful enterprises, a fact which was disregarded by the "Observer's Editorial", which support the widening of sanctions upon 'super-wealthy members of the Russian elite and banning Russians families from Europe',[6] surely, serves US's long-term strategy in Russia: to destabilize and undermine its order and world status 'from within' beyond that of Ukraine, 'from without'. It is like adding fuel to the fire. If Putin does not reveal his killers, through his intelligent agencies, he will be blamed for the crime and the "Spring of Nemtsov", launched before his killing, will be justified and openly sponsored by western powers...at this juncture, it is better for Russia to prepare for war, as it has rightly done during the last decade, if we want to have world peace rather than to prepare for peace, which, in anyway, will be undermined by western powers, since they cannot control anymore their economic power (world oligarchs), and the latter, need Russian resources in order to preserve their world power and hegemony.

[3] Britain to send military advisers to Ukraine, The Guardian, 24 February 2015.

[4] The demonization of Russia risks paving the way for war, Seumas Milne, The Guardian, 4 March 2015.