Friday, July 3, 2009, the Parliamentary Assembly of OSCE passed a resolution comparing Stalinism with Nazism. For Russia this distortion of history for political ends is unacceptable. This is a profound insult to the country that lost almost 27 million souls, as it stemmed the Nazi tide, responsible for 90 per cent of Wehrmacht casualties. It cannot go unanswered. 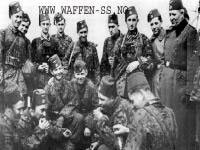 A monument and memorial park were dedicated to the members of the notorious Skanderbeg SS Division, the Kosovo Regiment and the Albanian fascist collaborators, to be built on a surface of 1.5 hectares in Pristina, in Kosovo, the NATO stolen province which is by international law Serbian territory. NATO has made Kosovo into a people and drug trafficking mafia state. Serbs who fought against the Nazis were ethnically cleansed from Kosovo and now Albanians, who supported Hitler, turn the place into a virtual cesspool as the clients of NATO Nazis. They never met a Nazi they didn’t like.

During the war, the Axis powers dismembered and occupied Yugoslavia. Adolf Hitler and Benito Mussolini detached Kosovo from Serbia and annexed it to Albania in 1941. Germany formed a Shqiptar "Kosovar" Waffen SS Division, the 21st Waffen Gebirgs Division der SS "Skanderbeg" which engaged in a policy of ethnic cleansing and genocide against the Orthodox Serbian population of Kosovo. The result was that the Shqiptars, with the help of Germany, were able to virtually exterminate the Serbian and Jewish populations of Kosovo, thereby creating an ethnically pure, Nazi German-sponsored Greater Albania or Greater Shqiperia.

Italian authorities in Kosovo seemed a bit distressed by the terror against Serbs and occasionally intervened to prevent Albanian attacks, at least in urban areas. A Serbian historian wrote: "Italian troops were stationed in the towns of Kosovo and acted as a restraining force ..." And Carlo Umiltà, a civilian aide to the Commander of the Italian occupation forces, described several instances where Italian forces fired on Albanians to halt massacres of Serbs.

The anti-Serb pogroms intensified after Italy's collapse in 1943, when the Germans assumed control of Albania, including Kosovo. Although the Germans raised the Albanian units as an anti-partisan force, its Albanian members were interested solely in murdering or expelling the Serb population. The 21st SS Skanderbeg Division indiscriminately killed Christian Slavs. About 100,000 Slavs were expelled from Kosovo by Albanians. The Albanian Skanderbeg Division and the Croats were guilty of unspeakable atrocities against Serbs and Jews. There was a total of 1,014,000 Yugoslavians who died in the war, 487,000 of them Serbs.

Albanian conflict in Kosovo was always motivated by secession, making Kosovo a part of Albania. This was the Greater Albania nationalist ideology established by the 1878 League of Prizren because Albania itself was always poor, backward, weak and powerless. At the same time, Albanians started to send their women into the Serbian region to breed more Albanians.

It was expected that after all Serbs had been killed or expelled from Kosovo and their Orthodox churches and cemeteries destroyed, a Greater Albania would result. In other words, what Albanians sought was a Kosovo taken over by ethnic Albanian Muslims who would expel the Serbian and other non-Albanian populations and eradicate any non-Albanian cultural or religious monuments or symbols. It entailed the total and complete extermination and eradication of any non-Albanian population or culture or religion in Kosovo. The Greater Albania nationalist ideology presupposed genocide: biological, cultural and religious. Even back then the US and Britain gave quiet support to these pro-fascist elements.

Prizren was a base for the Albanian “Kosovar” Muslim Nazi SS units. The participation of the Prizren League through its military formations in the extermination of Kosovo Jews is one of the most shameful episodes in the history of Kosovo. The military formations were the Albanian gendarmerie, the Kosovo Regiment, and the Skanderbeg SS Division, which numbered a total of more than 11,000 Albanian collaborators.

Recorded in the chronicle of acts of terror by Albanians from Kosovo and Metohija are crimes in Babuska municipality, forcible expulsion in Urosevac, executions in Velika Hoca, forcible detention of the population from Prizren and Grbol, murders in the village of Vitomirica.... Two hundred Serbs were killed just in the district of Djakovica and 5,000 Serbs were taken away to fascist camps in Albania. The participation of the Prizren League through its military formations in the extermination of Kosovo Jews is one of the most shameful episodes in the history of Kosovo.

A definitive work concerning the elimination of Yugoslav Jews, "The Crimes of Fascist Occupants and Their Collaborators Against the Jews of Yugoslavia" (revised 1957, published by The Federation of Jewish Communities of Yugoslavia) estimates that there were approximately 550 Jews in Kosovo at the time of Hitler's takeover of Yugoslavia, and that 210 of them, or 38 percent, were murdered, primarily by Kosovar Albanians. In fact, the Skanderbeg division's first operation was to act as "einsatzgruppen" against the Jews. The entire Jewish population of Kosovo was destroyed and never recovered to its pre-war numbers.

Interesting to note, also, that the KLA has named its units after "heroes" of Albanian Nazi fascist units. It has adopted the exact same insignia that was used by the Skanderbeg division. Many of its leaders and earliest members are the sons and grandsons of members of the Skanderbeg and Ballista units.

So there you have it in the case of Albania. In the words of the OSCE Resolution: genocide, human rights violations, war crimes and crimes against humanity. Their crimes during the war are exposed, the same ones committed more recently during the time of their great support from the criminals of NATO when non-Albanians in Kosovo were exposed to daily acts of terror.