Human organ trafficking in Kosovo finds support in the West 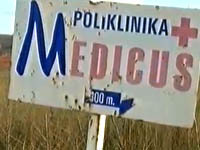 Russia will investigate the facts of abuse of its citizens in Kosovo. Russian citizens fell victims to illegal human organ trafficking in Kosovo, and there is big politics involved in the story. The case is directly connected with accusations of illegal organ trafficking that have been set forth against Prime Minister of Albanian Kosovo, Hashim Thaci.

It goes about the events which took place in August 2008. The story took place at Medicus clinic, in Kosovo's administrative center - Pristina. Two Russian citizens, who decided to become donors, had their left kidneys removed for further transplantation. The patients did not receive any money. The Kosovo Albanians used the same scheme to deceive the citizens of several other countries as well.

On July 14th, 2011, the Principal Investigative Administration of the Russian Federation filed a criminal case in connection with alleged human trafficking and causing severe bodily harm against unidentified members of a transnational criminal group. The group was trafficking Russian citizens to subsequently remove their organs, Vladimir Markin, an official spokesman for the Investigative Department said, The Kommersant newspaper wrote.

The scandal with illegal organ trafficking erupted in Kosovo in March 2008 - a month after the Albanian administration of the region declared independence single-handedly. Former Prosecutor of The Hague Tribunal, Carla Del Ponte, presented her book, "The Hunt" in which she wrote that Albanians took several hundreds of Serbs and other non-Albanians from the Serbian region to Albania in 1999. All those people had their organs harvested in a barbaric way. The would-be prime Minister of Kosovo, Hashim Thaci, was aware of all that, Del Ponte wrote in her book.

Western officials preferred to turn a blind eye on Del Ponte's book. It became quite a hardship for the author to have her book translated from Italian. However, it became impossible to silence the problem. In August 2008, the name of a medical institution - Medicus - appeared in the media. Representatives of the international peacemaking mission in Kosovo arrested several individuals and put two others on wanted list on the allegation of illegal organ trafficking.

The story received an extensive coverage. It was revealed that Kosovo-Albanian medics illegally transplanted a kidney from a 23-year-old Turkish national to a 70-year-old citizen of Israel. The latter was supposed to pay 120,000 euros. The Turkish man was arrested while he was leaving to his homeland. The Israeli patient was arrested at hospital.

The investigation showed that the organizers of the gruesome business were seeking potential donors in Russia, Kazakhstan, Moldavia, Azerbaijan and Turkey. They promised rewards of up to 20,000 euros to the donors, but none of them received anything.

Russian investigators will now have to find out who committed the grave crimes against the Russian citizens. There is definitely big politics involved in the story.

Carla Del Ponte has already announced her intention to participate in the investigation. Therefore, Russian detectives may technically join their efforts with the person, who had served as the chairwoman of The Hague Tribunal for many years.

It is worthy of note that Del Ponte was cooperating with her countryman Dick Marty, a Swiss parliamentarian. In December 2010, Marty delivered a report at the Parliamentary Assembly of the Council of Europe about the issue of illegal human organ trafficking. Marty particularly claimed that the Prime Minister of the region, Hashim Thaci, was directly involved in the shady business.

Del Ponte said that she offered Marty to come to The Hague to see the evidence. However, it turned out that as many as 400 pieces of evidence (presumably the DNA of the victims) had been destroyed upon the judges' instructions. The news came as a big surprise to Del Ponte.

Marty's report was made in December 2010. The document said that Hashim Thaci, a field commander also known as "The Snake", was in charge of a criminal group. The group was kidnapping people, conducting assassinations and selling human organs. Western leaders were informed about Thaci's activities ten years ago, although they did nothing to stop him.

European officials believe that the investigation of the crimes committed in Kosovo should be conducted by the EU's police mission in the region - EULEX. UN Secretary General Ban Ki-Moon shares this point of view as well. Serbia and Russia believe that it is the United Nations that needs to play the main role in the investigation.

Serbian Foreign Minister Vuk Jeremic stressed out that his country was prepared to cooperate with EULEX. However, he said, EULEX could not work outside Kosovo. To put it otherwise, the EU mission in Kosovo does not hold the necessary mandate and the territorial jurisdiction to conduct the investigation properly.

Jeremic paid attention to the problem of the safety of the witnesses on the cases connected with the Kosovo crimes. The key witness on the case of field commander Fathmir Limaj mysteriously died in Germany, for instance.