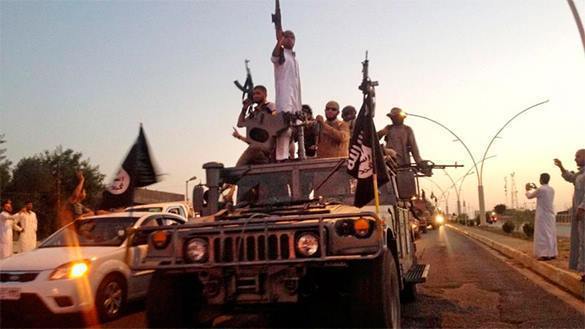 ISIS certainly is not what a great many people think that it is, if you judge what they think by what our corporate press proclaims incessantly.

Judging by what ISIS actually does and whom its acts benefit, its clandestine associates, and the testimony of some witnesses, ISIS is a complex intelligence operation. Its complexity reflects at least in part the fact that it serves the interests of several countries and that it has more than one objective. Its complexity reflects also the large effort to reinforce a false image with disinformation and staged events such as a video of a beheading which could not have been a beheading unless they've discovered a bloodless method until now unknown to science.

The subject of ISIS is not without brief glimmers of humor. The image of bands of men, swathed in Arabic robes and bumping their way around the desert in Japanese pick-up trucks with Kalashnikovs raised in the air for every picture has elements of Monty Python. The idea of modern, trained and well-armed military units turning and running from them resembles a war scene in a Laurel and Hardy comedy such as the one with Hardy stuck upside down in a WWI tank turret kicking his legs the whole time Laurel drives towards the German positions managing accidentally to round-up a whole trench-full of prisoners with some wire fencing that becomes snagged on the tank.

Despite the tiresome stupidities we see and hear about it, ISIS unquestionably does kill people and destroy things, that being its purpose, and there is no humor in that.

What tasks does ISIS serve?

ISIS appears to have served several tasks so far. First, it frightened Iraq's Prime Minister, Nouri al-Maliki, out of office in Iraq, a man America and Israel grew very much to dislike owing simply to his good relations with Iran, one of the unintended consequences of America's invasion of Iraq being expanded Iranian influence in the region. No doubt al-Maliki was terrified not so much by ISIS approaching in their pick-up trucks as he was by his own military's tendency, as if on cue, to turn and run from ISIS, often leaving weapons behind. The message was clear: you won't be protected.

Second, America's highly selective "air war" against ISIS somehow manages to attack infrastructure targets inside Syria with the feeble excuse that they are facilities helping ISIS. We've seen what American bombing can do when it's undertaken seriously, and somehow I have a hard time imaging the men in Japanese pick-ups lasting long when faced with what hit the Taleban in Afghanistan or Gadhafi's forces in Libya. The air strikes are partly a show for the world - after all, how can America be seen not to be fighting such extremely well-advertised, super-violent terrorists, guys putting out videos regularly from a studio trailer they must haul around with one of their pick-up trucks?  The air strikes' main purpose appears to be a way of hurting Assad and assisting those fighting Syria's army without coming into conflict with Russia, as they would with a large, direct campaign. They likely also punish elements of ISIS which have exceeded their brief and serve as a reminder to the rest of what could happen to them if they stray too far from their subsidized purpose once the war comes to an end.

Three, in some of the ground fighting in Iraq where we've read of Iraqi units fighting ISIS, the units are often Kurdish, and sometimes the press uses expressions like "Iraqi and Kurdish troops." But the Kurdish region is still part of Iraq legally, although it has been given a good deal of autonomy by the central government. The Kurdish region of Iraq is the country's prime oil-producing area, and in the estimation of many observers, an area both the United States and Israel would very much like to see severed from Iraq in the way Kosovo was severed from Serbia after America's devastating air war there. This would not only permanently assure Iraq's weakness, it would create a rather grateful and more willing oil supplier.

Where does ISIS get its technical equipment and the know-how to produce videos and run Internet sites? These are not qualities commonly found among fanatical fundamentalists anywhere; indeed most true radical fundamentalists tend to eschew technology. A supply of advice, technical assistance, and equipment comes from somewhere. Where does ISIS get the money for food, gasoline, clothes, ammunition, and Japanese pick-up trucks? And I wonder, did one of those wild-looking jihadi types just show up one day at an Iraqi car dealership and order a fleet of Japanese pick-ups? Were they delivered out on the desert or did a gang of jihadists march in, waving their Kalashnikovs, to drive them away?

The effort to destroy the Syrian government, whether by means of ISIS or anyone else, is warmly and generously supported by Saudi Arabia and its buddy Qatar - another oil-rich, absolute monarchy where political parties are banned - both these counties' primary interest being the defence of their immensely privileged situations against creeping threats of all progressive developments such as equal human rights or democracy or indeed against revolt led by external forces. The payments we now know the Saudi royal family long made to Osama bin Laden before 9/11 were simply bribes to keep him and his anti-establishment work out of the country. They really didn't care a lot about what the money bought elsewhere, but since 9/11 and its many Saudi connections - 15 of the perpetrators plus the past financing plus the many members of the royal family and bin Laden family secretly flown out by American officials at the time - the Saudi authorities were genuinely fearful of how America might respond and have become far more responsive to what America wants in the Middle East and now apply their money to such projects. What America wants in the Middle East is, invariably, what Israel wants, so there is now extensive, secret cooperation where once there was complete official hostility.

We have reports from plane-spotters in the region of daily flights of mysterious planes from Israel to Qatar. We have several eye-witness reports and photographs of supply bundles dropped from unknown planes into ISIS territory. Maybe ISIS has its own air force now? We know Turkey has served both as an entry point for countless terrorists into Syria and as a place of retreat and refuge when fighting with the Syrian army becomes too hot for them, the volumes of such activity having been too great to keep secret. We have reports of Turkish supply flights. A Jordanian official recently told a reporter that ISIS members were trained in 2012 by American instructors working at a secret base in Jordan.

If ISIS is what our corporate news pretends that it is - a fanatical Muslim extremist group that sprang suddenly from the desert sands much like Jack's bean stalk - one blindingly obvious question is, why does it not attack Israel or Israeli interest? Isn't that what one would expect from such a cast of characters? But it has not done so, undoubtedly because Israel is an important covert benefactor and supplier.

We might equally ask why ISIS has not attacked Saudi Arabia or its interests, for although the Saudi royal family officially professes a strict and conservative form of Islam, Wahhabism, in fact many of them are very worldly people who spend a good deal of time and money at the world's great pleasure palaces. Perhaps even more damning for a genuine fanatical fundamentalist, the Saudis now often secretly cooperate and make plans with Israel where mutual interests exist.

No, there is something highly suspicious about Islamic fundamentalist terrorists who avoid such interests while managing to brutally kill poor Syrian soldiers just doing their jobs along with the odd foreign journalist or aid worker who may just have seen something they shouldn't have seen. Of course, we have Edward Snowden himself having described ISIS as an operation intended to protect Israel. Despite the fact that some news sources have said the interview in which this was revealed never took place, my instincts tell me it likely did. Snowden has never refuted it, and the news sources saying it did not are highly suspect on such a subject.

The way ISIS serves Israeli and American interests is by providing a focus point for extremists, attracting them from various parts of the world so that they can be recorded and kept track of. Also the tracks back to the various countries from which they come provide security services with leads to places where there might be some festering problems. In the meantime, ISIS serves the interest of helping to bring down President Assad, a goal dear to the hearts of Israelis. Please remember that black operations, even the ones about which we know, show little consideration for lives or property. Just think of Israel's attack on an American spy ship in the Mediterranean during the Six Day War, its pilots knowingly shooting up and bombing for two hours the well-marked ship of its ally and benefactor, no explanation worth hearing ever having been offered.

Why do people want to join ISIS?

Just read conservative mainline sources (pretty much a redundant pair of adjectives) about the harm Snowden has done: claims of everything from his revelations about American intelligence having served to help ISIS avoid detection (!) to his revelations having set up the United States for another 9/11! You might think intelligent people would be ashamed of making such asinine public statements, but, no, there are almost no limits to trying to discredit those revealing murderous, dark operations.

We've had many reports of officials in various countries, including Canada as I write, concerned about the odd individual or small group running off to join ISIS. Now why should that be a concern? A few flaky people going abroad just removes them from your country, something I should have thought was a complete gain from a security point of view. Even if they were ever to return in future, you would know exactly who they are. Where is the basis for serious concern? But the psychological advantages of noise and hype to scare people about obscure dangers and "lone wolves" and "home-grown terrorists" outweigh completely good sense and intelligence.

Finally, there are numerous reports that Abu Bakr al-Baghdadi (a nom de guerre, not his real name), the leader of ISIS, is a Western intelligence asset. What little we can learn about him makes that entirely plausible. The Supreme Leader of Iran, Ali Khamenei, has said that the man is a Mossad agent, a claim supported supposedly by documents revealed by Edward Snowden. Abu Bakr al-Baghdadi is by all accounts a secretive man who speaks directly with few people, and even his birth place, given as Samarra, Iraq, is not sure. Records of his past, as those from his period of American captivity (always a great opportunity to "turn" someone to serving two interests), are not available. He was once reported killed but is still alive. He is said to have received intensive training from Mossad and the CIA, and some sources give his real name as Simon Elliot (or, Elliot Shimon), but few details can ever be certain in such dark operations.

The truly terrifying aspect of ISIS and other forces fighting with it in Syria is that the United States and Israel have approved and supported such wanton destruction in so beautiful and formerly-peaceful a place as Syria. Millions of lives destroyed and countless historic places damaged as though they were all nothing more than a few pieces moved on a geopolitical chessboard. I think it fair to describe that as the work of psychopaths.