The fall of Colonel Gaddafi 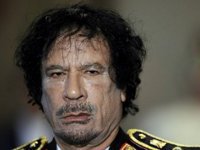 Who was Colonel Muammar Gaddafi? Was he a deadly Libyan tyrant and dictator as the Western media portrayed him - bent on assuming the leadership of the Arab world in the manner of Gamal Abdul Nasser?

That Gaddafi was a driven and desperate man of that there is no question. When he deposed King Idris from the Libyan throne, President Habib Bourguiba of Tunisia rightly warned him that he had miles and miles to go before he could claim to be a worthy successor to Nasser's mantle.

That Gaddafi was a wildly popular among the Libyan masses and even those in the rest of the Arab world, of that too there is no question.

All the tragic and haunting episodes of his life point to only one truth: That Gaddafi was a hunted man. And because he was a hunted man, Gaddafi never had the time or the leisure to do anything but run. His parting shots were true essence of his compassion and generosity - a gift of a soccer stadium to Pakistan, a plan to gift thousands of computers to schoolchildren in neighboring African countries, and dollops of oil aid to poor Arab countries.

These were not totally dispassionate acts. For the Colonel was trying to build a support network throughout the Muslim world because he was actively tracked and pursued by the English and French, tacitly supported by the United States. The Western powers were committed to removing Gaddafi from power lest he prove troublesome in furthering their interests in Libya with his daring rhetoric and outlandish capers.

Without cheap Libyan oil, without construction and drilling projects, English and French origin companies as well as American multinationals, stood to lose a lot in monetary terms as long as Gaddafi remained entrenched in power as the sole arbiter of Libya's destiny. That indeed was the mandate he had from the Libyan masses even though it was bitterly questioned by those of his enemies moving in tandem with Western ideas of progress and development.

Gaddafi did fight the French presence in Chad, he did roundly criticize the United States over its foreign policy, but was he guilty of shielding the two Libyans who were accused of plotting and carrying out the deadly bombing of an American passenger jet over Lockerbie in Scotland that led to the deaths of hundreds of innocent civilians? The conclusion is yet to be arrived at but it is inconceivable that Gaddafi - the dreamer with poetry in his eyes - was capable of committing a crime of such magnitude.

It was only the status and stature of Nelson Mandela as an international statesmen that managed to persuade the Colonel to hand over the two accused Libyans to the International Court of Justice to face trial. The whole sordid drama of the Lockerbie bombing is an enigma wrapped in mystery. Sooner or later, posterity will come out with the truth and hopefully save Gaddafi's name and honor as a Muslim leader of great vision and sagacity.

President Ronald Reagan did not even wait for the delivery of the verdict in the Berlin discotheque bombing case before he launched those deadly missile strikes against Libya, specifically against Gaddafi's private quarters that resulted in the killing of the Libyan leader's adopted daughter. Was this not a base and cowardly act unworthy of America and its great traditions?

In essence Gaddafi, like Saddam, was a victim of the Western media who had painted his character with satanic evil and malice even when there was no genuine evidence to justify such a heinous depiction of his personality. More often than not, Gaddafi was seen to act irrationally, was supposed to have delusions and some of his detractors even charged him with being mentally unstable!

Were not Gaddafi's antics inspired acts of conscience and a genuine and fitting response to a life lived under mortal fear and terror - the fear of being tracked and hunted down by Western agents who were out to eliminate him with full backing from their governments?

Gaddafi, like Saddam before him, was not a criminal although all sorts of demonic tendencies were attributed to both leaders by the Western press. All sorts of media scoops were hatched and all kinds of media blitzes were launched against Gaddafi so that even the mass of the Arabs thought that the colonel had got his just desserts shortly after his gruesome murder.

Who were the Muslim helots who overthrew Gaddafi and pursued him in armored cars and trucks to his hometown Sirte deep in the Libyan Desert? That he was killed with such horrible cruelty with bayonets and gunshots pumped into his head is evidence that his assailants could not have been true Muslims!

These enemies were really paid murderers and butchers who after the dastardly act proudly displayed Gaddafi's boy in a meat shop kept open for public viewing. By committing these very desecrations of the human body, Gaddafi's foes had unwittingly revealed their true un-Islamic natures.

And what were Gaddafi's last words to his assailants when he lay writhing on the ground unable to move because of the pain of his injuries and wounds: WHAT DID I DO TO YOU?

Gaddafi had died like a Muslim Christ on the cross with no words of abuse or blame for his enemies. History will have to wait for generations before another soldier and leader of Qaddafi's ilk and mettle surfaces again in the Arab world to taunt the West for its perfidy and cowardice.

The author is a BA (Honors) in Interdisciplinary Studies in the Humanities from the University of Chicago. He can be reached at [email protected]