Facts: Kosovo is Serbian. The Serbian nation has always included Kosovo. Kosovo is the heart that beats at the centre of the Serb psyche. The recent meddling by Martti Ahtissaari with his absurd plan for independence not only defies logic, its acceptance by five of the six members of the Group of Contact (also G8 members) must have Mussolini and Hitler laughing in their graves, for this was their plan for a Greater Albania. History yet again proves Albania wrong and Serbia right. 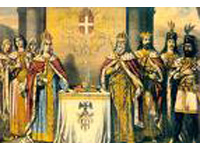 The United States of America, the United Kingdom, France, Germany, Italy...five nations whose colonialist history and practices of slavery speak for themselves, think it is a good idea to contravene what history has been trying to prevent in the Balkans for centuries, namely the creation of a Greater Albania, by giving the nod to the Finnish UN special envoy to the Balkans, Martti Ahtissaari and his plan to gradually create an independent Kosovo.

“Gradual and unconditional” independence for Kosovo, ripping the heart out of Serbia, a meddlesome and intrusive, unwelcome and unasked-for act of blatant arrogance from non-Balkan peoples. What business is it of theirs? What business is it of Finland, England, America, Germany, France or Italy to deliberate what is or is not Serbian territory, to carve off the historic berth, the birthplace of Serbia, and grant it independence just because 90 per cent of its inhabitants are Kosovar Albanians?

Ninety per cent, why? Because over decades, Albanian women walked from their backward, underdeveloped eclave in Shqiperije (Eagle-land, i.e. Albania) to give birth in Kosovo, part of Serbia (and Yugoslavia), where living conditions and the people were civilised. Born the baby, then brothers, husbands, uncles, aunts, grannies and a whole host of weird and wonderful beings poured across the frontier and inflicted themselves on the ethnic Serbs.

It is like Marseilles being occupied by North Africans, who push out the French and declare it as an Algerian enclave. It is like Leicester in England having a population of 90% ethnic Bengalis, who install a Koranic state and impose sharia law on Mrs. Bridges, Mr. Smith and the spinster, Miss Jones, the only three English people left. It is like a German city with a 90 per cent ethnic Turkish population seceeding from the Bundesrepublik and forming a separate Free Turkish State. Then the UNO backs them up, draws lines on maps and declares “This territory is not yours, it is theirs”, rather like historically the same nations carved up huge swathes of territory overseas and said “This is ours, and that is yours”.

Mussolini and Hitler must be laughing in their graves

The only country standing up for the rule of law, right and reason, as usual, is the Russian Federation, which refuses to allow any settlement which would be humiliating for Serbia and wishes to postpone any UN decision until a Serbian government can be formed (after elections) to deliberate on the issue. After all, it is the soul of their nation that Ahtissaari wants to rip out. Mussolini and Hitler must be laughing in their graves, for it was they who in 1941 integrated Kosovo into Greater Albania as tens of thousands of Serbs were forced out of their homes.

The Albanian government has claimed at various times that the Albanians are the descendants of the Illyrians, the original inhabitants of this region, and that therefore they have a right to this Province of Serbia.

However, for anyone who bothers to do any research, it would appear evident that the Albanians have got their history in a twist. However much one adulterates the word “Illyria”, one does not get anywhere as near to “Albania” as the “Albani”, a tribe which had lived on the Caspian Sea and which many centuries after the Illyrians had been conquered by the Romans, moved westwards into their mountainous refuge, where these tribes remained as the “Shqiperi” or “eagle people”. Polybius (200 – 118 BC) writes that the Albani and Illyrians spoke two distinct languages and needed interpreters to understand each other. Indeed, it was under the Ottoman domination of the Balkans that the Albanians settled definitively in the area which is Albania today.

It was the Serbian army, led by prince Lazar, aided to some extent by Bosnians and Albanians, which fought the heroic battle of Kosovo Polje (Blackbird Field) on 28th June 1389, gaining an honourable draw against the might of the Ottoman Turks, but being so weakened that by 1459, all of Serbia had been occupied. However, Kosovo Polye stood firm in the hearts and minds of generations of Serbs for hundreds of years as their rallying cry.

If these imperialist nations which want to give Kosovo to those who invaded it over centuries thought of a battle which rallied the national spirit, for Serbia this would be Kosovo Polye, near Pristina.

Giving Kosovo to the Albanians by making it an independent state is paramount to giving the thumbs-up to the Fascist practices of the Albanians during the Second World War, when they sided with Hitler. It is to condone acts of terrorism perpetrated by the Ushtria Clirimtare e Kosoves, the KLA, against fellow Albanians and Serbs alike. It is to create an Albanian question in the Balkans, because after Kosovo will come Greece, Macedonia, Serbia and Montenegro. Perhaps these nations should decide what happens on their frontiers and not Washington, London, Paris, Berlin, Rome and Helsinki and perhaps these countries should, for once, get off their high horse of arrogance and listen to Vladimir Putin.