As violence continues to rage across "liberated" Iraq under America's puppet "Prime Minister" Nuri al- Maliki, a fair amount of it at his instigation as his troops round up and shoot demonstrators (President Jalal Talabani, who had a heart attack early in the year has vanished without trace, Vice President Tarik al-Hashimi has fled to Turkey in fear of his life) one incident arguably of note, has gone un-noticed in the Western media. 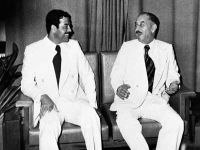 On Friday 21st June the Ba'ath Party, in a statement said that: "Party Members" had killed one of Saddam Hussein's executioners, alleging it was the balaclava masked man who placed the noose round his neck and led him to the trap door, in a videod and multi-mobile recorded death and aftermath of further horror, ushering in the US-UK's "New Iraq."

Saddam Hussein's death on 30th December 2006 took place at dawn on the day of the start of the week-long celebration of the religious festival of Eid al-Adha, which coincided with the great Haj pilgrimage to Mecca. It was thought that this might delay the execution, however, reportedly a late night meeting between Nuri al-Maliki and American officials over-rode any qualms about a lynching on an auspicious religious occasion.

The date of the death of the alleged executioner has not been confirmed, but has been reported as taking place near Yusufiyah, about twenty five miles south west of Baghdad, from a volley of bullets to the head.

All reports are unconfirmed independently, though are fairly detailed. Seemingly, after Saddam Hussein's death, noose man was rewarded by becoming one of Nuri al-Maliki's bodyguards and promoted to Captain.

One website (Elaf, arabic) states that before the fall of Saddam he sold vegetables in Torij, in Southern Iraq's Karbala province, stating it is the birth place of Nuri al-Maliki, whose past is, to say the least, opaque - it further claims that he and al Maliki are relatives.

The name of the alleged executioner? Muhammad Nasif al-Maliki.