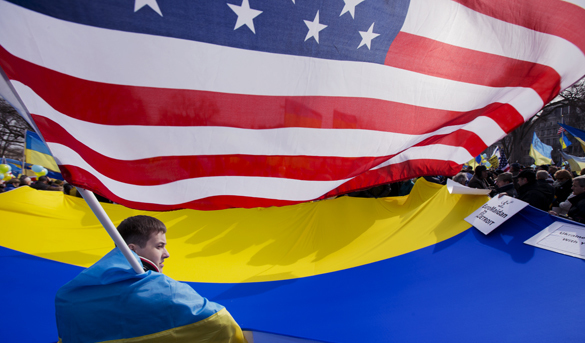 In an allegorical short film of the 1960s beautifully depicting the relationship of subjugation, a barefoot slave plays a flute and beats a drum to entertain his master, who sits in a rocking chair in front of his mansion in the countryside overlooking a big city. The slave's aim, like every slave's aim, is freedom, expressed in this case through his dream to flee to the big city and stop serving the master. Then, one day he makes an attempt to escape slavery. The master's punishment is prompt: he chains the slave to a goat, so that the slave now has to redouble his efforts in order to carry out his 'normal duties'. Following the punishment, he adjusts his dream of freedom accordingly: now his dream is much more 'realistic', i.e. how to escape being punished. The master grants this concession and the film ends with the overjoyed slave continuing to serve the master with renewed vigor and enthusiasm.

This short story could well describe any similar relationship of subjugation: from the Zionist subjugation of Palestine to the corresponding subjugation of the people of Donbas by the Kiev junta, installed there a year ago by the Transnational Elite (i.e. the elites controlling transnational economic, political, media power and so on, which are mostly based in the G7 countries). The morale is that peace, following conquest, is in itself an appropriate aim only for the conqueror who, upon succeeding in subjugating a people, will be the first to fight for 'peace' so as to legitimize his conquest. During this process, he will happily make 'concessions' as long as they do not affect his conquest.

Thus, following the 'coup from below' in Ukraine last year[1], which had clear economic as well as geopolitical aims, a similar story unfolded.

At the economic level, the aim of the coup was to create a client regime in Ukraine which would torpedo the Eurasian Union, given that once Ukraine had joined the EU, even as an associate member, it could never become a full member of a political and economic union like the EEU, which is based on the national and economic sovereignty of each member nation. This is by definition incompatible with membership of the EU, which effectively abolishes the economic, and therefore national, sovereignty of its members which are not also members of the TE. Given the particular significance (economic, geopolitical, cultural) of Ukraine for Russia and the Eurasian Union, one can imagine why its integration into the EU is a very serious - if not mortal - blow for the proposed Eurasian Union.

At the geopolitical level, the establishment of a client regime by the TE in Ukraine would mean the completion of Russia's encirclement, as all other countries in the area have already either joined NATO and/or the EU, or are expected to do so in the near future. With the stakes being so high, once the people of Eastern Ukraine had begun a heroic struggle against the Kiev junta, the latter launched a huge terrorist campaign against them, with the full support of the TE and the decisive help of the Euro-fascists of Maidan (the Right Sector etc. who, although being self-declared fascists, still fight under the EU flag!). This terrorist campaign culminated in the massacres that took place in Odessa and Mariupol, and the mass bombing of hospitals, schools, bus stations etc. in the cities of Donbass. This was clearly a systematic effort to subjugate the people of these areas which resulted in thousands of victims, while Western humanists looked the other way and Russia's fifth columnists did everything they could to minimize the significance of the massacre.

At the same time, the TE began a vicious economic, military and propaganda campaign against Russia, although the latter did everything it could to placate them: from the de facto recognition of the junta and the electoral farces that followed to legitimize the coup, to refusing to recognize the rebel republics of Donetsk and Lugansk. The inevitable result was that the rebel republics were not even allowed to take part in the 'peace' negotiations and Putin had to negotiate instead with the war criminal Poroshenko and his prostates in the TE.

The economic war against Russia involved everything from sanctions to the use of the 'oil weapon'[2], so that the Russian people could be made to suffer as much economic damage as possible for daring to support the Ukrainian rebels and, even more so, for celebrating Crimea's re-integration with Russia. Lately, the TE further tightened the screw by threatening Putin with Russia's exclusion from the Swift banking payment system, something which, according to Andrei Kostin, chief executive of VTB - Russia's  second-largest bank - would be tantamount to "war".[3]

At the same time, the US part of the TE directly threatened to arm the Ukrainian forces and send the necessary military personnel to train them. All this on top of the clandestine military help in arms and personnel already sent to Ukraine, of course - which, together with the logistical and technological help already given to the Ukrainian army, justifies its characterization by Putin as "essentially a NATO legion" that "doesn't pursue the national interests of Ukraine, but persists to restrict Russia".[4]

At the same time, a huge propaganda campaign was launched with the clear aim of isolating Russia and presenting Putin as some sort of criminal, exactly as was done with Saddam Hussein and Gaddafi, just before the campaigns to remove their national liberation regimes and murder them had begun.

It should be clear by now that the sanctions,the military threat and the propaganda campaign are all represented by the goat in the above allegorical story. It should also be clear that, the moment Russia agreed yesterday to a plan effectively securing the full integration of Ukraine into the NWO--by its joining first the EU and later possibly NATO as well­­-- slavery without the need for punishment became possible again. It should not be forgotten that an association agreement with the EU was Poroshenko's first act as soon as he took over and only its implementation was postponed until the end of this year. Furthermore, what was agreed yesterday at Minsk was, in fact, Poroshenko's program for decentralization, which he declared at the time of signing the EU association agreement. As he stated then, "We want to modernise my country. We want to introduce freedom, democracy and European values". In the same report the Guardian correspondent stressed about Poroshenko: "His strategy included constitutional changes to decentralise power, guarantees for Russian speakers, and the rebuilding of houses and other infrastructure damaged by fighting".[5]

It is obvious that the provision of yesterday's agreement for decentralization and a special status for Ukraine's rebel provinces, requiring Ukraine's adoption of legislation that would grant the Lugansk and Donetsk Regions permanent privileges, would not give these provinces the right to object to any major foreign policy decisions like the above. Particularly since the EU association agreement is already a 'law of Ukraine' to which all provinces, irrespective of local powers they are allowed to have, would have to submit.  As a shrewd analyst stressed about the new Minsk agreement:

Underpinning the document is an assumption of Ukrainian sovereignty - that in the end, all rebel-held territories and borders should come back under Kiev's ultimate control. The rebels' self-proclaimed Donetsk and Luhansk republics are never mentioned. Nor is there any reference to earlier calls for rebel self-government inside a looser federal state - an idea Russia toyed with as a way to weaken Kiev's hold on the east of the country.[6]

No wonder that the entire TE cannot hide its enthusiasm today for the 'big deal' that has been struck securing peace in Ukraine. Not surprisingly, it is supported in this by its usual cheerleaders among the liberal 'Left' in the West, as well as in Russia itself.

"Peace and order" is the dream of every subjugator. It means that the chains can be removed and everybody, including the subjugated or those threatened with subjugation, can live happily ever after. However, the Spartacuses of this world can always destroy such "happiness"...

Takis Fotopoulos is a political philosopher, editor of Society & Nature/ Democracy and Nature/The International Journal of Inclusive Democracy. He has also been a columnist for the Athens Daily Eleftherotypia since 1990. Between 1969 and 1989 he was Senior Lecturer in Economics at the University of North London (formerly Polytechnic of North London). He is the author of over 25 books and over 1,000 articles, many of which have been translated into various languages.

[1] See Takis Fotopoulos, The New World Order in Action: Integrating Eastern Europe and the Middle East into the NWO, (to be published shortly by Progressive Press), ch.6