Will Saddam Hussein's children have to answer for their father?

A half-brother of Saddam Hussein Sabawi Ibrahim al-Hassan passed away from cancer in Baghdad. Sabawi was sentenced to death and imprisoned, but because of poor health was placed in the prison hospital where he died. Remarkably, he was one of the last survivors of male relatives of the Hussein clan. 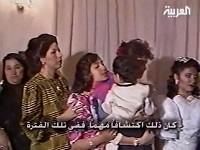 Earlier, in 2003, after the US invasion, Sabawi Ibrahim al-Hassan fled to Syria, in 2005 he was sent to Iraq where he was arrested on suspicion of leading and funding of counter-insurgency operations. In the U.S. list of 55 most wanted Iraqis he was number 36.

Under Saddam during the 1991 war in the Persian Gulf, Sabawi al-Hassan was head of intelligence and security services, and later a presidential adviser. His son, Ayman Sabawi Ibrahim, following the footsteps of his father, became a soldier. He was also arrested in the hometown of Saddam Hussein (Tikrit) and sentenced to life imprisonment, but later escaped.

When Saddam Hussein took over as the fifth President of Iraq, the international community had hoped that the era of strife, wars and violence in the Middle East would be over. Indeed, in the first few decades of his rule, Iraq was on the path to progress. Hussein often said that under his rule the country witnessed its best and worst days. Illiteracy, unemployment and poverty were virtually eradicated. Up until the beginning of the Iran-Iraq war, Saddam was surrounded by the economic, social and industrial wealth. But soon, thanks to a never-ending conflict with neighboring countries, and later with the West, Iraq has turned into a scorched land, and Saddam Hussein himself was convicted of killing 148 Shiites and hanged in December of 2006. The Iraqi leader came from a poor family. His father, Hussein al-Majid, was a poor peasant who died shortly after the birth of Saddam. His mother, Subha Tulfah al-Mussallat, a domineering woman, was able to challenge the typical situation of Muslim women who are often kept in isolation, and became the head of the family. After his mother's death her son built a huge temple in Tikrit in her memory.

Ibrahim al-Hassan, Hussein's stepfather, was an illiterate shepherd from impoverished outskirts. His sons, Hussein's brothers, held senior positions in the government intelligence and security agencies in Iraq through family connections. At the age of 20 Saddam joined the Baath Party. A year later, after a failed coup, he fled to Egypt and returned to Iraq only after the Baathists came to power. In 1968, he became deputy chairman of the Revolutionary Command Council, and a decade later - the absolute ruler of Iraq. He was the country's president for 23 years. Only six people are considered to be direct descendants of the Iraqi leader - his three daughters, Raghad, Rana and Hala, and two sons, Uday and Qusay. It is believed that he has a third son, Ali by his second wife Samira. Hussein married his first wife Sajida in 1963. This was a marriage by an agreement reached when Hussein was five and Sajid seven years old. They first met at their wedding in 1963. Sajida is the daughter of Hussein's uncle and mentor and his first cousin. The couple had five children.

The eldest son of Saddam Hussein, Uday, was born on June 28th, 1964. He had a reputation of a brutal and violence-prone person. He controlled a dozen newspapers and the most popular Iraqi television and radio stations. According to the estimates of the American rating agency Moody's, the net worth of his assets amounted to hundreds of millions of dollars. He also received income from a number of other businesses, including the food industry. He oversaw oil export, most of the domestic economy, as well as some issues related to international sanctions.

His compatriots noted that Uday's behavior was inversely proportional to his power, and the more sources of income he controlled, the more destructively he acted. Perhaps the most famous incident was the murder of a trusted valet of Saddam, after which the eldest son was sent into exile.

The degree of power surrounding Uday has always remained a mystery, although the majority of UN observers are still inclined to believe that it was the sons of Saddam who were entrusted his personal safety. Newsweek once made an interesting observation that it was unclear whether Saddam wore pants in his family. Some idea of ​​Uday Hussein's character can be gleaned from his relationship with women. His colleague Latif Yahia recalled that the surest way to win Uday over was to bring him a woman. Bodyguards often saw beat-up women coming out of his bedroom. On July 22, 2003 Uday Hussein and his brother were killed in a firefight in northern Iraq.

There is not much information about the middle son of the former Iraqi president. Qusay was born on May 16, 1966. He served as head of Saddam's security forces tasked not only with protecting ministers and party officials, but also arresting them as soon as they fell out of favor. His duties, in addition to the protection of the President, included supervision of Kurdish factions and the UN weapons inspectors. After his uncle Hussein Kamel fled the country and was killed, according to some, Qusay was responsible for the appointment of key command positions in the government of Saddam.

Some authoritative Iraqi sources believed that Qusay had more power than his older brother Uday. Ahmad Chalabi, the chairman of the Iraqi National Congress, the head of the opposition group in exile, said that Qusay as the head of the security forces had more influence on his father than Uday, and perhaps that he would become his successor. Qusay was married and had three children, his eldest son, Mustafa Hussein was killed along with his father and uncle in Mosul in 2003.

Raghad Hussein, the eldest daughter of the Iraqi ruler, was born on September 2, 1968. At the end of the Iraq war, she fled to Jordan. She is currently wanted by the Iraqi government on charges of financing and supporting the rebels and the banned Iraqi Baath Party. However, the family of the Jordan King refused to extradite her. Raghad is married to Hussein Kamel and has five children from this marriage.

Rana Hussein was born in 1971 and is the middle daughter of Saddam. Like Raghad, she fled to Jordan, where she stood up for the rights of her father. She was married to Saddam Kamel and has four children.

Hala Hussein was born in 1972. She is the third, and allegedly the favorite daughter of Hussein. Her father arranged her marriage in 1998 with Kamal Mustafa Abdallah Sultan al-Tikriti. Like her sister, Hala fled to Jordan with her two children. There is very little information about her, as about all Saddam's daughters. In 2003, when U.S. troops reached Baghdad, the president ordered to destroy all the records of the children. Those close to the family mentioned that she had a very bad relationship with her older brother, Uday, as the latter often yelled at his mother and younger sister.

Ali Hussein was born in 1982 from Sadam's marriage to Samira Shahbandar. The mention of him has always been a taboo subject for journalists. Those who dared to mention his name in the media faced violence of Saddam's regime. Yet, Saddam was madly in love with Samir. He forced her to divorce her husband, manager of Iraqi Airways, Noureddine Safi. Ali is now 31 years old, he fled Iraq with his mother immediately after the U.S. invasion. First they moved to Lebanon, and later settled in Canada. It is said that as soon as the attack by the United States was inevitable, Saddam ordered all members of his family to leave the country and seek refuge outside Iraq. As a caring father, he gave his children full financial support to help them to start a new life.

This year marks the tenth anniversary of the U.S. invasion of Iraq. The country is struggling to get out of the ongoing political struggle and sectarian tension. The hopes for economic stability and the acquisition of civil rights for the people of the country did not turn out to be true. Hussein's family members who have escaped persecution and death have to live in a foreign land and observe the events in Iraq from afar.