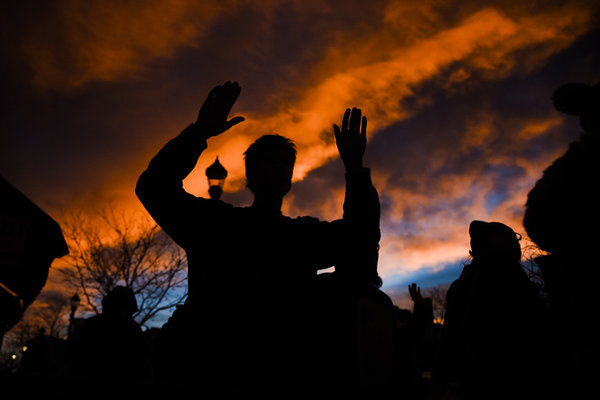 All capitalism has to offer black Americans is the ghetto, the prison or the barrel of a gun.  Today, it seems impossible to look at the news without seeing another report of a black man murdered by police. Lynching may have changed its form somewhat, but the essential relation underlying it has not changed. The human sacrifice continues.  Many have pointed out the racist dimension of this violence, but it is not true that the United States is a consistent white supremacist society.  It harms whites every day. In fact, to call the United States white supremacist is almost an apologetic. The United States is imperialist. It deploys a tactical white supremacism in its effort to reproduce the imperialist fundamentals. (This is an important lesson we can all get from CLR James The Black Jacobins-a most timely book for this moment.)

If we misrecognize this tactic as the enemy's objective we will be defeated. In order to eliminate the afrophobic barbarisms that are the death warrant for this society, we need to call the thing by its right name.  Having done this, we are in a position to destroy the generative mechanism.  The explanation of history is economic not biological or racial.  If we lose sight of imperialism, we miss the connection between national racism and global racism. We also will construct movements that can easily be divided and conquered when the focus of imperialist aggression shifts to another group of people.

Position of black population in American history is well known

The contradictory position of the black population in American history is well known. On the one hand, black people are the excluded other in a white supremacist State. On the other hand, black people form an essential element without which American society could not exist. The black population functions as an internal third world for American imperialism-a hyper exploited stratum of workers and a comprador minority. From a more limited national economic perspective, this role can be characterized as that of a 'surplus population.' Marx defined long ago the role played by the surplus population in a capitalist society. Their role is to make up an industrial reserve army, to be available for capital just in case it needs to rapidly expand operations or break a strike. This surplus population is compelled to live in stressful and precarious conditions to ensure their willing availability for capital's purposes in a pinch.  No group would ever volunteer for this role. Yet at the same time, the filling of this role is absolutely necessary for the continuation of capitalist society. Given this state of affairs, it is obvious that the capitalist will need to use brute force compulsion to ensure that this role is imposed.  During the latter half of the twentieth century, there was struggle to contest this arrangement; that struggle came to a premature termination in a wave of political violence-targeted assassinations and police terror.

The dissolution of the Soviet Union as the major competitor of American imperialism opened up new possibilities for the most retrograde elements of the imperial ruling class. Fueled by a round of primitive accumulation carried out in Russia and Eastern Europe under the slogan of 'democratization' and 'liberalization' the imperialists seemed to be omnipotent. The sole superpower and so on.   There seemed to exist an atmosphere of impunity in which capitalist crime would go wholly unchallenged for lack of a principled opposition. This Imperial hubris of this time is aptly summed up in the infamous Thatcherite slogan "there is no alternative."  The content of this Imperial hubris is the idea that the planetary masses are a captive audience, a population that can be abused with no limits. The architects of this restoration cherished a certain nostalgia for the glory days of what they might've called classical economic liberalism-the glory days of primitive accumulation, the pillaging of the New World, and of Africa, when the free market ran wild. They claimed to be releasing the "animal spirits" or capitalist enterprise, but the only "animal spirits" released were those of the parasite.

The American economy has shifted from industrial production to rent extraction-finance, insurance, and real estate. This imperialist financialization has been ongoing since the 1970s with the result that working class jobs have become ever more scarce and underpaid. In response to the loss of productive jobs, a carcereal economy has been developed-across the rust belt, the prison replaced the factory as the source of income. The raw materials for this flesh trade were supplied by the operation of the "war on drugs"-mandatory minimum sentences, intensified policing, racial profiling and so on. The operations of this "war" also intersected with the interests of the real estate "developers" who wanted to expropriate black neighborhoods for gentrification projects. Through the use of police terror, populations could be immiserated until they vacated what had become an unlivable hostile environment.

From out of the situation, the hint of a way forward emerges in the form of the BGF (Black Guerrilla Family).  This group is known to the bourgeois media as a prison gang, but their political lineage is more complex.  According to the Florida Department of Corrections,  "The BGF is the most politically oriented of the major prison gangs...They were formed as a Marxist/Maoist/Leninist revolutionary organization with these goals: [to e]radicate racism, [to s]truggle to maintain dignity in prison, [and to o]verthrow the United States government." [1]  This is a militant anti-imperialist organization which is willing to assess the social situation for what it is. They should awaken us to the magnitude of the struggle in which we are involved and the type of organized resistance that is called for.  These police murders are a moment of truth for the post-1989 world.  It has failed. The American Imperium is in crisis-the ruling class has proven itself incompetent and a state of lawlessness has emerged. A global revolutionary situation is emerging, and the answer for activists and progressives may very well come from the cell blocks...