The recent election of Barack Obama has been implied to suggest or has given the impression that American society has arrived, has finally progressed from the racist mentality and stereotypes of the past which saw people of color treated as less than human. But it hasn’t gone without notice that there have been numerous threats against the President-Elect, as well as spurious rumor mongering going on about his birth circumstances in an all-out desperate effort to prevent him from taking office, even though results of the election gave him a clear mandate. 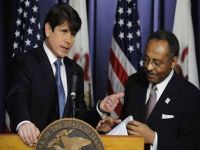 The country also finds itself in the throes of a complete economic collapse. People are being stirred and shaken to suddenly find themselves jobless, homeless and with living conditions and quality of life declining as it is predicted that the closure of many convenience facilities will make life a bit more difficult and challenging.

Another disturbing set of incidents have also presented themselves. Union workers belonging to United Electrical Workers Local 1110 in Illinois suddenly found themselves laid-off from their jobs and held a sit-in protest after banks had refused to lend the window factory where they worked the $1.75 million to pay them for outstanding wages and benefits.

The major player in the refusal was Bank of America. The Governor of Illinois, Rod Blagojevich, stepped in telling Bank of America they would not do business in Illinois unless they fulfilled their obligations since the banks had been given a huge amount of bailout money but were holding it back from the purposes it was intended.

The rest is history. Consequently, Governor Blagojevich found himself tried and convicted in the media ostensibly for trying to sell the Senate seat of President-Elect Barack Obama. As a result of these accusations, attempts are being made to remove the Governor from office, even though there has been no trial, no conviction and for all we know no real evidence either. It was disturbing to see the President-Elect place himself on the opposite side of the fence, along with all of the politicians, speaking as though there was no question of guilt.

The final litmus test will be when Governor Blagojevich’s new appointment to the Senate,

Roland Burris, goes to take his post in the Senate. Senate leaders have vowed to oppose the appointment of Burris. They have made the following claim: "The Senate Democratic caucus has said from the very beginning we would not accept an appointment by the governor. This has nothing to do with Mr. Burris. It is about the man doing the appointing."

The Governor has said through his spokesman that Senate Majority Leader Harry Reid is guilty of a conflict of interest in that Reid telephoned him in early December to discuss the seat being vacated by President-elect Barack Obama. What is known is that Roland Barris is not the candidate that Reid had in mind.

Burris, a former Illinois attorney general, accepted Blagojevich's appointment and is expected to be in Washington on Tuesday and ask to be sworn in along with the rest of the Senate. The Democratic leadership is expected to defer the matter to a rules panel until impeachment proceedings against Blagojevich are settled, apparently in the hope that a new governor will appoint someone else.

Burris has retained an attorney who is lobbying for Senate support, sending a letter to Senate Democratic leaders asking them to seat his client. In the letter, attorney Timothy Wright called on the Senate leaders to grant the people of Illinois the representation the U.S. Constitution affords them. The letter was addressed to Dick Durbin of Illinois, Charles Schumer of New York, Dianne Feinstein of California and to Reid, who has said that anyone picked by Blagojevich will be turned away.

It is interesting to note that Reid urged Blagojevich to appoint either Illinois Veterans Affairs chief Tammy Duckworth or Illinois Attorney General Lisa Madigan, according to anonymous sources. Reid reportedly opposed the appointments of Democratic Representatives. Jesse Jackson Jr. and Danny Davis supposedly because he feared they would lose the seat to a Republican in the 2010 general election. Now that is totally absurd and defies all logic. Republicans are not about to win anything unless things change radically or people suddenly get mass amnesia. Reid also allegedly opposed Emil Jones, the powerful black leader of the Illinois Senate, on the same grounds.

"What is clear to me is that every candidate that was African-American was denied and every other candidate was acceptable," said Wright, adding, "I'm not going to read too much into that."

Mr. Wright also said that he plans to go to federal court if the Senate refuses to seat Burris. He has already asked the Illinois Supreme Court to force Illinois Secretary of State Jesse White to certify the appointment of Burris, hoping it will help Burris to be seated.

So besides the blatant racism against black candidates, the question can be asked: Will those who stand up to the corporations consequently commit political suicide? American society, after all, has not really advanced much. Perhaps it’s a case of one step forward, two steps back. It will be clearer when we can see how Mr. Burris will be received. After all, the man’s credentials are unimpeachable.