Blacks and the Obama government 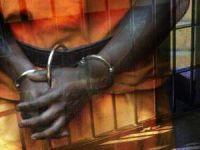 The very high unemployment, overcrowding of prisons for blacks and the cold-blooded murder of Osama Bin Laden showed that Obama further attacks the U.S. black population.

Black Americans have suffered much more than other Americans as a whole because of the policies of Barack Obama.

Worse yet, the official figures of unemployment are significantly distorted because the government does not count the number of chronically unemployed. In some cities like DC and Brooklyn, the rate is 30%-50%. Black unemployment is on the verge of being the highest in 25 years.

Only 44% of blacks own homes, compared to 70% whites. Blacks should be especially angry that President Obama launched an Educational Excellence for Hispanics Advisory Commission. Blacks have suffered from the lowest educational outcomes for decades, where is their commission? Obama thinks he can keep dismissing problems facing blacks and still carry the "black vote," but Hispanics are the fastest growing minority so he wants to impress them while taking the black vote for granted.

Likewise, if you're a white man between the ages of 20 and 34 years, your chances of being in prison is one in 55, if you're a black man the same age, his chances are one in nine.

The situation is not improving. Unemployment among black people was higher in 2009 than in 2008, and was even higher in 2010. Greater even than the period of George Bush.

Another attack is the following: the State of Arizona approved what could easily be considered a draconian law to identify illegal immigrants. The law has essentially made immigrants become criminals automatically.

The effect of Osama bin Laden

In various media outlets of the black movement, a complete change from the euphoria at the presence of a black man in command of the major world imperialist power can already be seen.

Now the questions are clear. How can unemployment among blacks be so much worse than that of the Bush-era? Is there any real policy to fight unemployment among black Americans? Why are blacks the majority in the U.S. prisons? Finally, what is the reason to keep one of the leaders of the black people, Mumia Abu Jamal, on death row?

The devastating effect of any illusions came with the arbitrary hunt and cold-blooded murder of Osama Bin Laden. The perception about the case, especially in the black movement, is that Obama represents only the interests of world-wide capitalism and he formed an alliance with the American right wing.

This when silence did not become complicit in the specific action of Obama, who has been the equivalent of the worst days of Bush, when he "forgot" that there are international laws, treaties and legal procedures.

To defend the terrorist action of the Obama government in the case of Bin Laden is to defend the death squads, hired guns, gangsters and even the execution of blacks. After all, slaves were also thrown in the ocean during slavery. The politics of Obama, in this sense, is medieval.

The government of Barack Obama is not doing anything for blacks, and it is rare to find a "specialist" who predicts a better future. Resounding in the country is the laconic speech that pleads: "Black people, give me four more years." It is possible that black people will not accept.