The Soviet Union Under Attack Again! 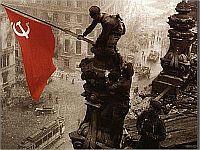 The Soviet Union Under Attack Again!

OSCE just voted (213 said "Yes" out of 320) that Stalin is a war criminal and he started the Great Patriotic War, the Soviet regime is criminal and Russia should pay monetary compensation for the “victims“.....

On this I must repeat the war cry: NOT ONE STEP BACK!!

I will NOT stand by and see the Soviet Union and her war heroes slandered in such a most outrageous fashion. With this act of total depravity, OSCE has lost all credibility or what little credibility it ever had.

They, like the cowards they are, laid down and played dead as Hitler overran the continent. They speak of Molotov-Ribbentrop while forgetting Munich and the shame of Neville Chamberlain and their own notorious, infamous appeasement…

Without Russia, Hitler would still be in charge of Europe and they would all be speaking German and giving snappy Hitler salutes. Hey, wait a minute! Many of them do! This Baltic state is where Nazis and their collaborators are venerated…showered with honors and flowers.

Europe resembles one gigantic Nazi land these days. Vilnus, one of the fascist worshipping Baltic states is an interesting locale for this utter outrage. What else to say? Vilnus was a big Nazi stronghold in the war and so it is today, where Nazi uniforms and insignia are sold in the thousands and a place where Hitler’s birthday is celebrated with parades. It is the same for all the Baltic states. By all means, pour some compensation on these depraved sons and souls of the Reich to compensate them for the loss of their beloved German Nazi heroes.

One thing these Nazis cannot forgive and cannot tolerate is the fact that the USSR defeated the Nazis virtually single-handedly and that in a nutshell is their problem with Russia. Nazis lost a war because of the USSR so there you have it. The people of the Soviet Union did not spare themselves on the field of battle.

So, it is no surprise that each and every former Soviet Republic or Eastern European nation that gravitates to the west are fascist loving pigs. They see in the west and the European Union the heirs and the embodiment of the fascism they love so much. It is the west, not the Soviet Union that should be labeled like Hitler Germany because there is no difference whatsoever between what they are and what they are doing now and what Hitler did. They are the modern day fascists and Nazis, the true heirs to Hitler’s ideology.

When the Soviet Union came into being, the model was being sabotaged by trillions of dollars worth of subversive, terrorist activities and murderous foreign policies, but it was never defeated. Socialism is not a failed system, it is a perfect system which was wholly misunderstood, sabotaged, attacked, subverted and perverted.

Yes there were excesses under Stalin, but the Goebbels propaganda coming from the west entirely exaggerates it and lumps many of the victims of their own sabotage efforts in the tallies. They brought a Civil War on the territory of Russia. The country had to protect itself. It is also well to remember that Stalin was a Georgian and many Russians suffered just as others did.

Rather than making such malicious, hypocritical gutter level insults and snipes at the Soviet Union, the impotent ingrates should be on their hands and knees in gratitude to the nearly 27 million Soviet citizens who heroically and selflessly gave their lives in the fight against fascism. They should be drafting resolutions on how they might compensate that brave people for cleaning up Europe at considerable personal loss. The Russian Federation should have no further dealings with fascist, Nazi OSCE.

On your knees! Will we glorify the Soviet Union? Yes we will!

My only regret is that the Red Army did not march ALL THE WAY into the western-most corner of Europe and eliminate all remnants of fascist trash!