In the United States of America, there are some 7,000 racial hate incidents a year. In the Russian Federation, in 2009, there were 71 such incidents with foreigners, down from 110 in 2008. Yet why is the international press full of stories about racial hate crimes in Russia and silent about everywhere else? 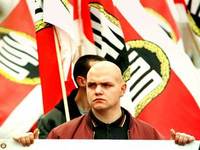 As usual, Russia is the victim of a slagging campaign by those who wish to gain a reputation by making derogatory comments in the “bought ‘n’ biased” western media, which likes to sell cosy packages of half-truths to its readers and viewers. In this case, the topic once again is racial hate crime.

The Russian authorities are as clear in divulging the facts and figures as they are in stating categorically that the Government is cracking down hard on what amount to be a handful of thugs, and nothing more or less than that.

The facts are these and they are crystalline, for all to see. Nobody with a brain in Russia supports the extremist groups which perpetrate these crimes, and anyway, what is Russia but a wonderful mix of peoples and cultures and languages and cuisines?

The Russian Federation is composed of no less than 160 different ethnic groups who speak around 100 different languages. Therefore being Russian and racist are two opposites, which makes no sense… and for this reason the criticism in the international media should be made more responsibly.

Let us take for example the JoongAng Daily of the Republic of Korea, with its outrageous editorial from February 24, claiming that “foreigners who aren’t Caucasian gamble their lives” in Russia whose streets “are roaming with bands of ultra right nationalist groups” before using that idiotic phrase “the collapse of the Soviet Union”.

Let us get one thing straight, once and for all: the Soviet Union did not “collapse” any more than it “lost” the Cold War. It simply dissolved voluntarily as catered for under the Soviet Constitution and morphed into something else, a Commonwealth of Independent States. No big deal. As for the Cold War, nobody can win or lose something that does not exist.

As regards the JoongAng Daily, lamentable as it is that four Korean students have been murdered this year alone, it is a gross exaggeration to claim that “15 per cent of the young Russian population supports the extremist nationalistic movement”.

It depends on who you ask. Ask someone with a brain, and the answer will be no, of course not. Ask some half-wit with nothing else to do, and anything is possible.

The streets of Russia are as safe, if not more so, than those in most countries. And as in most countries, the authorities are composed by professionals who are doing their job, and well. Racial hate crime in Russia is a fraction of what it is in the United States of America, but of course nobody is going to speak about that.