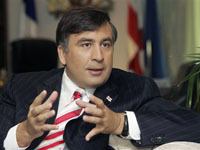 November 23 marks eight years since the resignation of the ex-President of Georgia, Eduard Shevardnadze. Eight years ago, this day became the peak of the "revolution of roses" which paved the way to power for sitting President of the country, Mikhail Saakashvili. A variety of events took place during the years of Saakashvili's presidency. What are the main achievements and failures of the Georgian leader?

Saakashvili's rise to power was practically predetermined. The Georgians were very much concerned about the things that were happening in their country in the fall of 2003. Unemployment, poverty and corruption were coming along with unsolved conflicts in Abkhazia and South Ossetia. Georgia was fed up with Shevardnadze. The country was in dire need of changes. Saakashvili, the former minister for justice, who took the side of the opposition, became an incarnation of such changes. The West began to support the new politician. A youth opposition movement Kmara (Enough) appeared in Georgia with the support from the West.

Parliamentary elections were held in Georgia on November 2, 2003. Shevardnadze's bloc "For New Georgia" won the vote. Neither the Georgian opposition, nor the West recognized the results of the elections.

Thousands of people took to the streets of the Georgian capital of Tbilisi on November 22, when the new parliament gathered for its first session. A crowd of people with Saakashvili at the head broke into the building of the parliament in the evening. The people were clutching roses in their hands, and the events in the Georgian capital became known as the "revolution of roses."

Eduard Shevardnadze was present in the building. He had to leave the parliament in a hurry. Shevardnadze stepped down on November 23; the results of the parliamentary elections were canceled. Saakashvili became the new president of Georgia on January 4 2004.

The political situation in the country remained unstable anyway. Saakashvili managed to quarrel with many of his followers. The mysterious death of the former Prime Minister of Georgia Zurab Zhvania and entrepreneur Badri Patarkatsishvili cast special shadow on the image of the Georgian president. Parliament speaker Nino Burdjanadze, former minister for defense and regulation of conflicts Irakly Okruashvili and Georgy Khaindrava came into opposition to Saakashvili. The list of such officials can go on and on.

When Saakashvili was coming to power in Georgia, he spoke a lot about democracy. However, brutal reactions to opposition meetings with the use of batons, tear gas and water cannons do not match this word. Saakashvili won the elections in 2008. He gained a little bit more than 50 percent, but many still doubt about the results.

In 2004, Saakashvili managed to remove Aslan Abashidze, the leader of Adzharia, from power. The Adzharians are an ethno group of the Georgians. The majority of the residents of Abkhazia and South Ossetia did not want to unite with Georgia. The number of provocations in South Ossetia was growing along with the defense budget during Saakashvili's presidency. All that led to the war in the Caucasus in August 2008. Saakashvili lost the two republics and chewed his tie on the air.

As for foreign politics, Saakashvili began cooperation with the USA, the EU and NATO. Georgia became another home for NATO military men. Saakashvili single-handedly abolished visas for citizens of Western states. He announced an intention to join the EU and NATO. Together with Ukraine's former President Viktor Yushchenko, Mikhail Saakashvili became the locomotive in the movement of the former Soviet republics towards the West. Georgia has not become a member of either the European Union or NATO, though.

The relations with Russia were more or less decent only during the first six months of Saakashvili's presidency. They took a turn for the worse afterwards. Russia banned the imports of Georgian wine and mineral water; a spy scandal erupted between the two countries; the monument to warriors the liberators was exploded in Kutaisi. The diplomatic ties between Russia and Georgia were finally terminated after the war in 2008.

Saakashvili has been staying in power for nearly eight years. If nothing happens and everything remains within the framework of democracy, the Georgian leader will leave in the beginning of 2013. Which are his major achievements and failures? Pravda.Ru asked this question to Valery Khomyakov, a scientist of politics, the general director of the Council for National Strategy.

"Saakashvili has some achievements indeed. Road police officers stopped taking bribes in Georgia. Unfortunately, the experience of such a small country as Georgia is not good for such a large country as Russia. He has not destroyed corruption entirely, of course, but the situation is much better at this point than it used to be.

"He has not been on friendly terms with democracy. However, it takes hundreds of years to build democracy, so eight years is simply not enough. There is no place for opposition in the country. There is no democracy when it comes to the question of power changes either.

"His biggest mistake is the loss of 20 percent of territory, of course. He lost Abkhazia and South Ossetia because of his mistakes. His foreign policies deserve criticism. He virtually rented Georgia's sovereignty to the United States and ruined the relations with Russia, which affected hundreds of thousands of common Georgians.

"If the Georgian president continues to play these anti-Russian games, Georgia will not be able to profit from it. There are different forces in America and Europe, and he needs to understand that.

"Saakashvili wanted to join the EU and NATO, but failed to do so. The European Union is too busy with its own problems now - it does not need another one. As for NATO, the Georgian army does meet the standards of the alliance. It appears that Georgia is not going to become a NATO member in the foreseeable future.

"Saakashvili needs to deal with economy instead of politics. If he does that, he will probably have something to be proud of, at least to a certain extent."