Soviet War Memorial To Be Exploded in Georgia on Stalin's Birthday

The authorities of Kutaisi, Georgia’s second largest city, are about to complete the dismantling of the Military Honor Memorial, which was erected in the city of the former Soviet republic in honor of those who died in WWII. It seems that Georgian President Mikhail Saakashvili decided to follow the example of the government of Estonia, where the Bronze Soldier Memorial became a symbol of state vandalism. 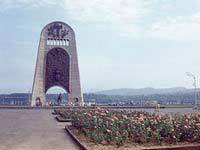 Soviet War Memorial To Be Exploded in Georgia on Stalin's Birthday

The memorial, designed by sculptor Merab Berdzenishvili, was unveiled in the beginning of the 1980s. The memorial is dedicated to the Georgians who defended the Soviet Union, their motherland, during the years of the Great Patriotic War. Over 700,000 Georgians took part in the war; every second one of them returned home.

It does no seem to be likely that the authorities of Kutaisi could not find a good site for the new building of the parliament anywhere else. Officials of the city administration released the following statement:

“The memorial was plundered during the 1990s, and it is impossible to recreate it. It is located near the territory where we plan to build a complex of building of the Parliament of Georgia. Therefore, we decided to dismantle the memorial. A monument honoring the Georgians who died in the Great Patriotic War will be erected in another location of Kutaisi.”

It seems that it is better for Georgia to build something new rather than restore something old. The government of Estonia did nearly the same – they relocated the monument to Soviet warriors, the Bronze Soldier, in Tallinn. In Georgia, the memorial is an obstacle for the parliament, whereas in Estonia the monument was an obstacle to a bus stop that was placed there soon afterwards. The Bronze Solder was moved to a war cemetery and the mass grave underneath the monument was desecrated.

President Saakashvili could protect the monument, but he intends to enjoy the landscape without it.

The creator of the war memorial in Kutaisi, Merab Berdzenishvili, said that the people, who ordered to remove his memorial, wanted to strengthen their positions with it. He said that the Georgian politicians were dismantling the history of Georgia, not just his monument alone.

The leaders of the Georgian opposition condemned the events in Kutaisi too.

“This is vandalism. Rejecting authorities is a peculiarity of the sitting Georgian government. We condemn this act of vandalism. This is a spit in the souls of all war veterans, not only in Georgia,” oppositionist David Berdzenishvili said.

Russia set out its concerns about the decision of the Kutaisi city government. Aleksey Ostrovsky, the chairman of the Committee for CIS Affairs, stated that Saakashvili decided to remove the memorial from the city on the threshold of the 65th anniversary of Victory in the Great Patriotic War.

Sergey Stepashin, the head of Russia’s Audit Office, told Itar-Tass that the war memorial in Kutaisi was one of the best monuments in honor of WWII victims that was erected on the territory of the post-Soviet space.

“The Georgian authorities do not dismantle the memorial in Kutaisi – they explode it. They destroy history and memory of the victims. This is sacrilege. It is very telling that they are going to ruin the monument the day when Stalin was born. If Stalin woke up today, I do not know that he would do with this person [Saakashvili]. It’s impossible to deal with the sitting president of Georgia,” Stepashin stated.

The current events in Kutaisi fit in Saakashvili’s politics. He approved the establishment of the museum of the “Soviet occupation” in Georgia. The years, which Georgia spent being a member of the Russian Empire and then the USSR are called “colonization,” “occupation,” “the Russian yolk” and so on.

There is a question, though. Will Saakashvili remove the monument to Stalin in the town of Gori?