The BBC has recently aired a TV report, in which Georgian President Mikhail Saakashvili ate his tie. 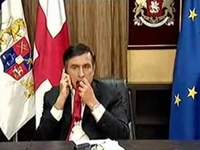 The report was about the situation in the area of the conflict between Georgia and South Ossetia. The footage showed Saakashvili making a call to a top Western official. It could be clearly seen that Mr. Saakashvili was having a nervous breakdown.

Mikhail Saakashvili has been staying in the full glare of publicity for several weeks already. Specialists of medicine have questions about his mental state, Rossia TV channel says.

His statements, which he makes on one and the same day, may often contradict to each other. Russia’s well-known psychologists claim that the Georgian leader is a mentally unstable individual. Specialists say that Saakashvili’s ambition exceeds his capabilities.

The Russian foreign minister said Thursday that Georgia could "forget about" getting back the two separatist regions, South Ossetia and Abkhazia. Medvedev also met with their leaders in Kremlin this past week, raising the prospect that Moscow could absorb the regions even though the territory is internationally recognized as being within Georgia's borders.

US President Bush does not even think to stop making ridiculous statements regarding the conflict.

"The world has watched with alarm as Russia invaded a sovereign neighboring state and threatened a democratic government elected by its people. This act is completely unacceptable to the free nations of the world, Bush said in his weekly radio address.

Mr. Bush of course believes that the bombing of Yugoslavia, the incursion in Iraq, the recognition of Kosovo’s independence and many other criminal acts are absolutely acceptable to the free nations, of which the USA is the most outstanding example.

Needless to say that it will never occur to either Mr. Bush or Ms. Condoleezza Rice to speak about the nightmare that thousands of South Ossetian residents had to experience after Georgia’s attack on the republic. They do not want even to hear about it.

US major media outlets, controlled by the White House, do not want to report the truth about Georgia’s aggression either. A US girl of South Ossetian origin happened to stay in the unrecognized republic during Georgia’s attack on the territory. She was lucky to leave the troubled nation safe and sound. However, when she appeared in a program of Fox News channel, the TV host did not even let the girl speak a word of truth.

Russian forces pulled back Saturday from positions in a town not far from Georgia's capital after Russian President Dmitry Medvedev signed a cease-fire deal, but his foreign minister said the broader withdrawal would be contingent on further security measures.

Russian soldiers had dug shallow foxholes in the center of Igoeti, some 30 miles (50 kilometers) from Tbilisi, but abandoned them later in the day. Tanks and troops were still in place on a hillside on the edge of Igoeti and there was no immediate signs of a pullout from the strategic city of Gori, about 20 miles (30 kilometers) up the road.

The military movement came around the same time that officials said Medvedev had signed a cease-fire deal that set the stage for a Russian troop withdrawal after more than a week of warfare in the former Soviet republic that lies at the heart of increasing tensions between Russia and the West.

The agreement, also signed a day earlier by Georgian President Mikhail Saakshvili, calls for both Russian and Georgian forces to pull back to positions they held before fighting erupted Aug. 8. Georgia had launched a massive barrage to try to take control of the Russian-backed separatist region of South Ossetia; the Russian army quickly overwhelmed the forces of its small U.S.-backed neighbor, and Moscow's troops drove deep into Georgia.

The Russian seizure of territory, including Gori and its positions in Igoeti, raised fears that Russia was aiming for a permanent occupation of the country that once was part of its empire. The cease-fire calls for Russian troops to pull back to positions they held in South Ossetia before the fighting but allows allowing limited Russian patrols in Georgia just outside the province.

But Lavrov, in televised remarks, also said the Russian pullback would take place "as further security measures are taken." Asked how much time it would take, he responded: "As much as is needed."

He was not specific about the security measures but accused Georgia of undermining security. "This depends not only upon us," Lavrov said.

"We are constantly encountering problems from the Georgian side, and everything will depend on how effectively and quickly these problems are resolved," he said.

While Russian forces abandoned the center of Igoeti, they dug into positions on a hillside with a view of the area, possible defensive positions as their comrades withdraw.