The summit of BRICS countries will take place in the city of Ufa in July. According to the Foreign Ministry of the Russian Federation, the summit will take the association to new heights. Yet, as expert Roman Andreeschev told Pravda.Ru, the interests of  BRICS member countries do not coincide as members of the association do not impose severe restrictions on their partners. 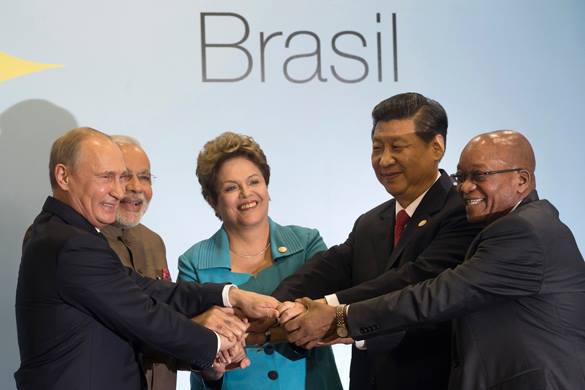 "BRICS includes Brazil, Russia, India, China and South Africa. BRICS countries are large countries, they are leaders of development in their regions, and their economies grow quite rapidly. Is it enough to speak of a union of states? To which extent do their interests coincide?"

"I would say that BRICS is not an organization. For the time being, this is a forum, a platform for discussing opinions."

"The forum does not impose severe restrictions on partners in this association. Quite possibly, BRICS will become an international organization. For the time being, they sound out opportunities and establish contacts. Presently, BRICS members have different interests, even though it may seem strange. At the same time, if we look at the economic component of these interests, we have a lot in common."

"The upcoming summit is expected to finalize key institutions of the association, such as the BRICS bank. Some say that it will be an analogue of the World Bank and the IMF that the BRICS countries are not very happy with."

"By and large, the political field of influence is currently being reworked. We can see this from Russia's current relations with the West. Russia is showing all other countries that one should bring interests together as it is difficult to defend them alone."

"What would be the tasks for the BRICS bank?"

"The bank will give loans to countries in need, to member states in the first place, to support the stability of currency and currency relations between the members. It goes about billions of dollars. The name of the director of the new bank will most likely be announced at the summit.

"If we look at the IMF, we will see that the BRICS members united to conduct a reform within the scope of the IMF. The USA does not agree with that, of course. In fact, we can see that the United States is a huge spoke in the wheels of global economy. The Americans do not want to move away from their positions, even though they do not lose anything from this small reform.

"Both China and Russia, India, and other countries that are not part of the BRICS bloc, say that one should elaborate a new mechanism, because there is just one country that prevents the development of the financial and economic system of the world community. It was the USA that created both the World Bank and the IMF, but we can see that the Americans refuse to play by their own rules now."

"China established the Asian infrastructure investment bank, in which Israel, Australia, the Middle East already show their interest. The bank has been developing more than just successfully. Can it be an alternative that may halt the development of BRICS?"

"I do not think so. There are many projects in the world. China wants to gain access to natural resources. BRICS does not say that China must forget about its interests in accessing the Caspian Sea. As a result, the first large gas pipeline from Kazakhstan was built to China. The project cost China more than $10 billion.

"If we look at other associations, for example, the Shanghai Cooperation Organization,  there are some things that Russia can do being a member of such organizations. For instance, Russia can not take part in the creation of a free trade zone within these organizations. Such a move would be a disaster for the Russian economy, because Russia will not be able to present its goods at such prices."

"To date, Russia is the only member of BRICS that remains in confrontation with the West. Our partners are quite careful when it comes to relations with the West and especially with the United States. India and Brazil, for example, openly declare their interest in maintaining strong economic ties with the United States, Canada and the EU. China is also investing in Europe heavily. Is there a hope that BRICS members will march as one single front?"

"BRICS is a platform for discussion of common ground issues. In my opinion, it is too early to talk about a political component of this project. One should look into the interests that connect BRICS members first. Economy is above politics. When the USSR collapsed it was the case of politics being above economy. Look at South Korea - this is a rapidly developing country today. However, one-party system in South Korea was abolished in 1985. The multiparty system was introduced only when the country was able to demonstrate its economic power to the world.

"Last year, it was said that Russia would be raising loans from the countries of South-East Asia. Where are these loans? Who gave them to us? This is a long process, and Russia can not just wave goodbye to the West and turn to the East to say hello. It would be insane to break all the ties and turn the whole economy to another direction. Germany paid Russia 42 billion euros in 2013 alone for natural gas. That was only for gas!

"China, Brazil and India can see Russia being attacked from the West. Of course, no one wants to experience the same, but no one wants to terminate all their ties. After all, China is No. 1 trade partner of the United States. If disagreements appear, we can see US leaders flying to China for talks.

"Everyone wants to see real results of economic activity. If it goes about an economic union, all want to see advantages of this economic union. When there are such advantages, it is easier to promote political interests."