Innocent journalists, diplomats and tourists are still being tortured in US-run concentration camps

The first conference of former Guantanamo prisoners, organized with the participation of the UN Committee Against Tortures and Amnesty International, finished in London yesterday. Members of the conference accused US authorities of keeping innocent people in jails under fictitious names, of using tortures against them and of organizing a network of secret prisons outside the USA. 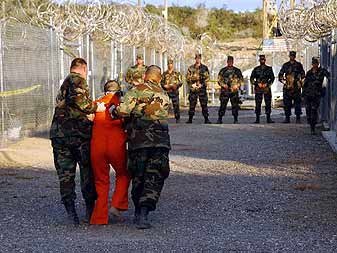 The conference was launched with reports delivered by several people, whose lives were greatly affected by US jailers.

A British citizen named as Moazzam Begg moved to Afghanistan long before 2001. The man got married there, opened a small book shop and was living quietly in his own little world. US servicemen seized Begg in 2002: the man was put into irons and placed in a solitary cell of the X-Ray camp for three years. Moazzam Begg was suspected of funding terrorists with the income that he received from his book shop. Begg was lucky: he did not go insane, nor did he sign any statements of his own “confessions” and was eventually released in 2005.

An Australian citizen Mamdouh Habib was a member of a German tourist group in Pakistan. The group was arrested, the German tourists were released, but Habib was sent to Guantanamo and then redirected to a secret jail in Egypt. US military men were torturing him for six months, making Habib plead guilty of terrorist activities.

Hasan Eretri was sent from Guantanamo to Morocco for a year. The former prisoner said that when US investigators were interrogating him, they had both the list of questions and the list of answers, which he was supposed to sign.

Indonesian diplomat Saad Ikbal made a report about the state of affairs in Afghanistan after the US-led occupation of the war-torn country. The diplomat was kidnapped in Indonesia and then taken to a secret jail in Egypt: Saad Ikbal became a disabled person there as a result of tortures.

Al-Jazeera journalist, Sami al-Haj, a citizen of Saudi Arabia, is still being kept as a Guantanamo prisoner.  The journalist made a report in Afghanistan, which evoked quite negative emotions with the US command. The reporter was arrested and sent to Guantanamo, where he was kept for three years without any investigation.

The above-mentioned and many other testimonies confirm the facts of tortures against humans used by US special services. In addition, it has become clear that a lot of people still remain USA's prisoners, in spite of the fact that US investigators have nothing to accuse them of.

Experts participating in the conference paid special attention to the question of massive arrest of innocent people. Lawyers proved that US special agents had written documents confirming the fact that Airat Vakhitov, Guantanamo's former prisoner of Russian origin, was a captive of the Taliban regime in Afghanistan prior to the US-led invasion in the country. However, the Russian man was taken to the camp as a Talib. To crown it all, no one has charged Vakhitov with anything afterwards.

It took specialists almost 12 months to collect the necessary materials for the conference.

Airat Vakhitov and other former prisoners of Guantanamo said that there was an infant and a 100-year-old man among others of the first group of prisoners, which the US military brought to the base from Afghanistan. Tens of people went out of their minds on the way to Guantanamo, others lost their reason as a result of experiments and medications used in the Guantanamo concentration camp.

There is no information on the number of prisoners in Guantanamo and its branches all over the world. Specialists believe, though, that the USA keeps about 600 individuals in the central camp and several thousands of prisoners are held in Afghanistan, Iraq and other US-controlled camps.

Russian lawyer Alexandra Zernova said that Russian prisoners of Guantanamo were a lot more active than others. “They were the first to raise the subject of tortures in Guantanamo. They conducted press conferences and thus exercised their fearlessness. They had to pay for it afterwards, when authorities started persecuting them,” Zernova said.

UN experts against tortures, Manfred Novak and Paul Hunt, said after the conference that the testimony collected with the help of former Guantanamo prisoners of Russian origin would most likely give rise to a special investigation within the UN's framework.