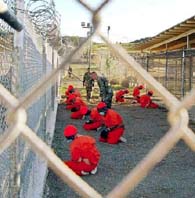 Nobody should grandstage or try to score cheap points from Auschwitz. Neither should Guantanamo exist in this day and age.

Before the hail of criticism is unleashed, together with hacking attacks and threatening messages on the author's personal and secret e-mail accounts, let it be said that Auschwitz, together with the other concentration camps, showed the depths of depravity and evil to which the human being can descend.

For those of us who have visited such a camp, we can only start to imagine the sheer horror of what took place, the studied concentration of cruelty and hatred against innocent human beings, defenceless men, women and children whose only crime was to have been born.

Nobody who has not lived through such an experience has the right to consider he or she knows anything about how the victims felt. The stench of hundreds of human beings huddled together in cramped conditions permeates the mist around these places to this day. The screams and cries can still be heard, the desperate, questioning look in the eyes of the six-year-old boy about to be gassed can still be seen and the trusting grip of the three-year-old's hand in his mother's as she was led away can still be felt.

Today, sixty years after the liberation of Auschwitz by the Soviet Army, we continue to see human injustice on a scale which is shocking, given the times we live in. The horrors at the concentration camps of Abu Ghraib and Guantanamo Bay are today's Auschwitz, Belsen, Treblinka, Dachau.

Torture. In the third millennium. Holding prisoners for three years without a legal process, without a formal accusation, without the right to a defence lawyer.

Is this US law? Is this the freedom and democracy and the human rights the United States of America is speaking about all the time? Is this the civilization towards which we have striven?

Do the citizens of the United States not have the right to a proper legal process, which is the norm and not the exception in each and every state apart from a few tin-pot dictatorships? Are US citizens so fundamentally superior to all other human beings?

Why then does the Bush regime insist on stretching the fibres of human decency to the extreme with practically every action it takes? And how could America's decent citizens even consider voting back such an evil regime which is an insult to the victims of human degradation throughout history and which will go down in the annals of the same as a serious hiccup in the progress of human civilization?

Bush, Rumsfeld and Cheney do not belong in the Ark. They belong on another planet where they may feel more at home with species of their ilk - the Alien.